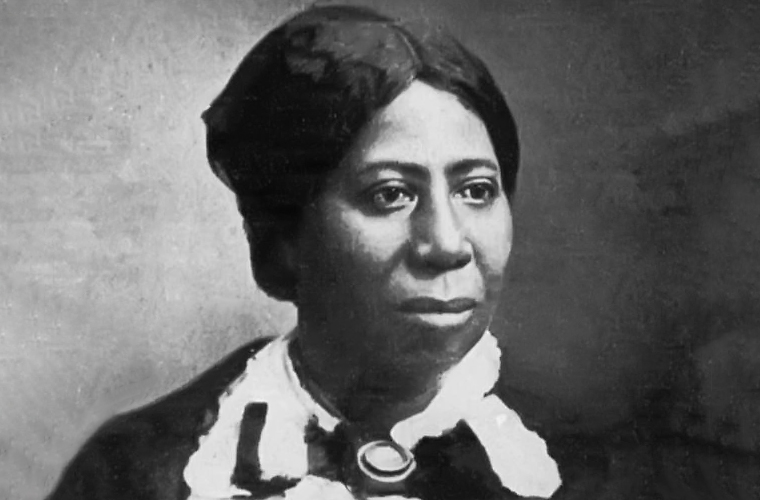 Anna Murray, the wife of Frederick Douglass and the mother of their children, personifies the unheralded woman behind the great man. She’s lucky to get a footnote in the widespread attention given to her husband, but she deserves her moment outside the huge shadow Frederick cast.

Born free in 1813 in Denton, Maryland, Anna was the daughter and the youngest of seven children of Bambara and Mary Murray. Unlike her older siblings, Anna was born free. Her parents had been freed just before her birth. By the time she was 17, Anna had already gained recognition as a competent and resourceful laundress and housekeeper. It was while performing her duties as a laundress that took her to the docks that she met Frederick who was working there as a ship caulker.

Several writers and historians conclude that through Anna’s counsel and her status as a free woman Frederick was convinced to seek his own freedom. She played a decisive role in helping him to escape in 1838, including the sailor clothing from her wash that facilitated his disguise. The money she had earned and saved was shared with her husband, funds that were crucial in moving him along the Underground Railroad. Thus, Anna embarked on a personal commitment that became a collective one as a member of the anti-slavery movement.

After Frederick successfully escaped and landed first in Philadelphia and later in New York City, he sent for Anna who brought with her the goods she needed to set up a household for them. On September 15, 1838, they were married under the name of Johnson but changed it to Douglass once they settled in New Bedford, Massachusetts.

Anna and Frederick had five children during the first ten years of the marriage, including Rosetta, Lewis Henry, Fred Jr., Charles Remond, and Annie, who died at the age of ten. Skills she had cultivated in the South, particularly as a laundress, were vital in the financial welfare of the family since Frederick was often immersed in the abolitionist movement that brought in only a meager amount of money.

She buttressed her husband’s earnings from speeches by learning to make shoes, which only minimally interfered with her involvement in the Boston female anti-slavery movement. Later, at her insistence, after Frederick began publishing his own newspapers, their sons were taught the craft of typesetters. When the family moved to Rochester, New York, their home was a veritable safe-house and way station for runaway fugitives from the South. The Underground Railroad had few stops along the way to freedom to match the accommodations provided by Anna and her family. She was a versatile cook and her services as a laundress assured the wayfarers with clean clothes as they traveled to Canada.

Very little is said about Anna in Frederick’s three autobiographies, which was true of many abolitionists who helped him escape, fearing it would endanger them. There were also the long absences from home, Frederick’s increasing role as a speaker of renown, a writer, and a statesman. The separation was made all the more problematic with his close working relationship with women at his newspapers, a role limited by Anna’s illiteracy. Even so, she soldiered on caring for the children and managing a household that was open to every escaped fugitive from slavery. As their daughter Rosetta wrote of her father, his “was a story made possible by the unswerving loyalty of Anna Murray.”

Three years ago, almost to the day, I submitted a profile on Anna and promised to one day add more information from her daughter’s book that remains the most significant portrait of her mother. In her book, “My Mother As I Recall Her,” Rosetta elucidated on her mother’s steadfast devotion to her husband and her unwavering commitment to the emancipation of others.

“There is much room for reflection in the review of the life of such a woman as Anna Murray Douglass,” her daughter wrote. “Unlettered tho’ she was, there was a strength of character and of purpose that won her the respect of the noblest and best. She was a woman who strove to inculcate in the minds of her children the highest principles of morality and virtue, both by precept and example. She was not well-versed in the polite etiquette of the drawing-room, the rules for the same being found in the many treatises devoted to that branch of literature. She was possessed of a much broader culture, and with discernment born of intelligent observation, and wise discrimination she welcomed all with the hearty manner of a noble soul.

“I have striven to give you a glimpse of my mother,” Rosetta continued, “and in so doing I am conscious of having made frequent mention of my father. It is difficult to say anything of their mother without the mention of her father, her life was so enveloped in his. Together they rest side by side, and most fittingly, within sight of the dear old home hallowed memories and from which the panting fugitive, the weary traveler, the lonely emigrant of every clime, received food and shelter.”

After the death of Anna’s youngest daughter, Annie at age ten, in 1860 as the Civil War dawned, Anna’s health began to deteriorate. In the summer of 1874, she visited the home of Gibson Valentine, in the far northeastern corner of Maryland. She stayed there for three days and then returned to the Elkton Railroad Station to catch a train. Mention of her in the vicinity was a cause for great excitement and her passing through there was even reported in a local newspaper, giving her the attention she rarely received.

She got an even greater mention when she died of a stroke in 1882 at the family home in Washington, D.C. Initially she was buried at Graceland Cemetery in D.C. but it was closed in 1894, and on February 22, 1895, she was moved to Mount Hope Cemetery in Rochester, to be buried next to her husband, as Rosetta has cited above.