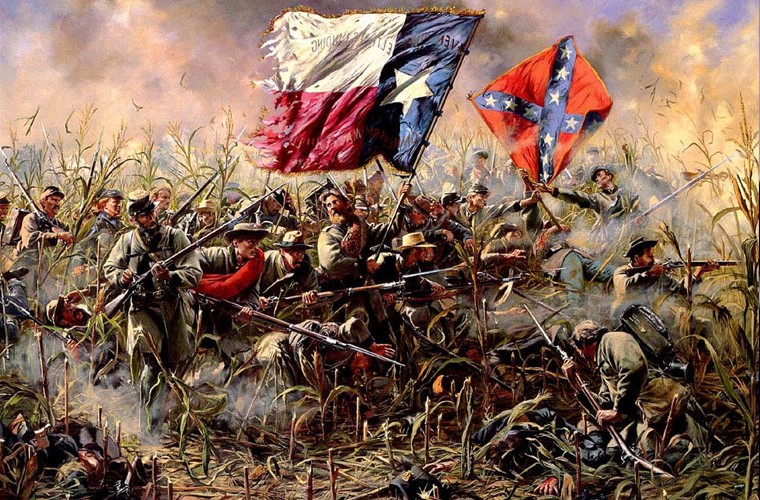 The Civil War in the United States began in 1861, after decades of simmering tensions between northern and southern states over slavery, states’ rights and westward expansion. The election of Abraham Lincoln in 1860 caused seven southern states to secede and form the Confederate States of America; four more states soon joined them. The War Between the States, as the Civil War was also known, ended in Confederate surrender in 1865. The conflict was the costliest and deadliest war ever fought on American soil, with some 620,000 of 2.4 million soldiers killed, millions more injured and much of the South left in ruin.

In the mid-19th century, while the United States was experiencing an era of tremendous growth, a fundamental economic difference existed between the country’s northern and southern regions.

In the North, manufacturing, and industry was well established, and agriculture was mostly limited to small-scale farms, while the South’s economy was based on a system of large-scale farming that depended on the labor of black slaves to grow certain crops, especially cotton and tobacco.

Growing abolitionist sentiment in the North after the 1830s and northern opposition to slavery’s extension into the new western territories led many southerners to fear that the existence of slavery in america—and thus the backbone of their economy—was in danger.

Did you know? Confederate General Thomas Jonathan Jackson earned his famous nickname, “Stonewall,” from his steadfast defensive efforts in the First Battle of Bull Run (First Manassas). At Chancellorsville, Jackson was shot by one of his own men, who mistook him for Union cavalry. His arm was amputated, and he died from pneumonia eight days later.

In 1854, the U.S. Congress passed the Kansas-Nebraska Act, which essentially opened all new territories to slavery by asserting the rule of popular sovereignty over congressional edict. Pro- and anti-slavery forces struggled violently in “Bleeding Kansas,” while opposition to the act in the North led to the formation of the Republican Party, a new political entity based on the principle of opposing slavery’s extension into the western territories. After the Supreme Court’s ruling in the Dred Scott case (1857) confirmed the legality of slavery in the territories, the abolitionist John Brown’s raid at Harper’s Ferry in 1859 convinced more and more southerners that their northern neighbors were bent on the destruction of the “peculiar institution” that sustained them. Lincoln’s election in November 1860 was the final straw, and within three months seven southern states–South Carolina, Mississippi, Florida, Alabama, Georgia, Louisiana, and Texas–had seceded from the United States.

Even as Lincoln took office in March 1861, Confederate forces threatened the federal-held Fort Sumter in Charleston, South Carolina. On April 12, after Lincoln ordered a fleet to resupply Sumter, Confederate artillery fired the first shots of the Civil War. Sumter’s commander, Major Robert Anderson, surrendered after less than two days of bombardment, leaving the fort in the hands of Confederate forces under Pierre G.T. Beauregard. Four more southern states–Virginia, Arkansas, North Carolina, and Tennessee–joined the Confederacy after Fort Sumter. Border slave states like Missouri, Kentucky, and Maryland did not secede, but there was much Confederate sympathy among their citizens.

Though on the surface the Civil War may have seemed a lopsided conflict, with the 23 states of the Union enjoying an enormous advantage in population, manufacturing (including arms production) and railroad construction, the Confederates had a strong military tradition, along with some of the best soldiers and commanders in the nation. They also had a cause they believed in: preserving their long-held traditions and institutions, chief among these being slavery.

In the First Battle of Bull Run (known in the South as First Manassas) on July 21, 1861, 35,000 Confederate soldiers under the command of Thomas Jonathan “Stonewall” Jackson forced a greater number of Union forces (or Federals) to retreat towards Washington, D.C., dashing any hopes of a quick Union victory and leading Lincoln to call for 500,000 more recruits. In fact, both sides’ initial call for troops had to be widened after it became clear that the war would not be a limited or short conflict.