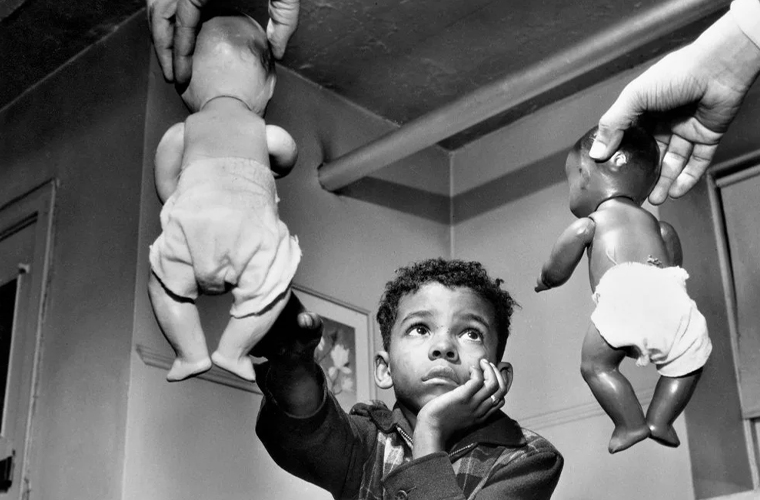 In the 1940s, psychologists Kenneth and Mamie Clark designed and conducted a series of experiments known colloquially as “the doll tests” to study the psychological effects of segregation on African-American children.

Drs. Clark used four dolls, identical except for color, to test children’s racial perceptions. Their subjects, children between the ages of three to seven, were asked to identify both the race of the dolls and which color doll they prefer. A majority of the children preferred the white doll and assigned positive characteristics to it. The Clarks concluded that “prejudice, discrimination, and segregation” created a feeling of inferiority among African-American children and damaged their self-esteem.

The doll test was only one part of Dr. Clark’s testimony in Brown – it did not constitute the largest portion of his analysis and expert report. His conclusions during his testimony were based on a comprehensive analysis of the most cutting-edge psychology scholarship of the period.

A “Disturbing” Result
In an interview on the award-winning PBS documentary of the Civil Rights movement, “Eyes on the Prize,” Dr. Kenneth Clark recalled: “The Dolls Test was an attempt on the part of my wife and me to study the development of the sense of self-esteem in children. We worked with Negro children—I’ll call black children—to see the extent to which their color, their sense of their own race and status, influenced their judgment about themselves, self-esteem. We’ve now—this research, by the way, was done long before we had any notion that the NAACP or that the public officials would be concerned with our results. In fact, we did the study fourteen years before Brown, and the lawyers of the NAACP learned about it and came and asked us if we thought it was relevant to what they were planning to do in terms of the Brown decision cases. And we told them it was up to them to make that decision and we did not do it for litigation. We did it to communicate to our colleagues in psychology the influence of race and color and status on the self-esteem of children.”

In a particularly memorable episode, while Dr. Clark was conducting experiments in rural Arkansas, he asked a black child which doll was most like him. The child responded by smiling and pointing to the brown doll: “That’s a nigger. I’m a nigger.” Dr. Clark described this experience “as disturbing, or more disturbing, than the children in Massachusetts who would refuse to answer the question of who would cry and run out of the room.”

“The Doll Test” in Brown v. Board of Education
The Brown team relied on the testimonies and research of social scientists throughout their legal strategy. Robert Carter, in particular, spearheaded this effort and worked to enlist the support of sociologists and psychologists who would be willing to provide expert social science testimony that dovetailed with the conclusions of “the doll tests.” Dr. Kenneth Clark provided testimony in the Briggs, Davis, and Delaware cases and co-authored a summary of the social science testimony delivered during the trials that were endorsed by 35 leading social scientists.

The Supreme Court cited Clark’s 1950 paper in its Brown decision and acknowledged it implicitly in the following passage: “To separate [African-American children] from others of similar age and qualifications solely because of their race generates a feeling of inferiority as to their status in the community that may affect their hearts and minds in a way unlikely ever to be undone.” Dr. Kenneth Clark was dismayed that the court failed to cite two other conclusions he had reached: that racism was an inherently American institution and that school segregation inhibited the development of white children, too.

An “Incorrigible Integrationist”
Although Dr. Kenneth Clark is most famous for the “Doll Tests,” his personal achievements are equally as prestigious. He was the first African American to earn a Ph.D. in psychology at Columbia; hold a permanent professorship at the City College of New York; join the New York State Board of Regents, and serve as president of the American Psychological Association. His wife Mamie Clark was the first African-American woman and the second African-American, after Kenneth Clark, to receive a doctorate in psychology at Columbia.

In 1946, the Clarks founded the Northside Center for Child Development in Harlem, where they conducted experiments on racial biases in education. During the ’50s and ’60s, the Clarks focused on New York City schools. Dr. Kenneth Clark was a noted authority on integration, and in particular, he and his wife were closely involved in the integration efforts of New York City and New York State. Dr. Kenneth Clark said of Harlem that “children not only feel inferior but are inferior in academic achievement.” He headed a Board of Education commission to ensure that the city’s schools would be integrated and to advocate for smaller classes, a more rigorous curriculum, and better facilities for the poorest schools.

The Clarks also created Harlem Youth Opportunities Unlimited, or Haryou, in 1962 which was endorsed by then-Attorney General Robert F. Kennedy and President Lyndon B. Johnson, whose administration earmarked $110 million to finance the program. Haryou recruited educational experts to better structure Harlem schools, provide resources and personnel for preschool programs and after-school remedial education, and reduce unemployment among blacks who had dropped out of school. Dr. Clark was a staunch advocate of the total integration of American society — his peers described him as an “incorrigible integrationist.”