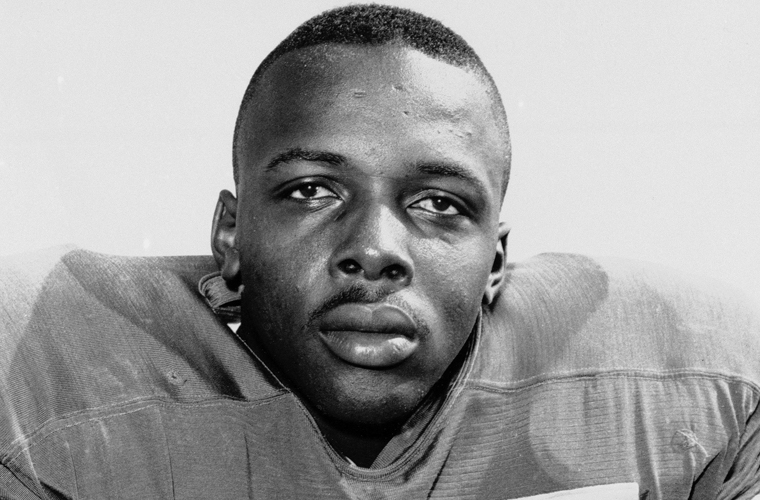 Jones, an accomplished high school athlete in Orlando, Florida, played football at South Carolina State College and Mississippi Vocational College. He was relatively unknown in 1961 when the Los Angeles Rams selected him in the 14th round of the National Football League (NFL) draft, but he soon distinguished himself as the left defensive end of the Rams’ “Fearsome Foursome,” the moniker of the team’s renowned defensive line.

Jones was surprisingly agile for his powerful frame—about 6 feet 5 inches (1.9 meters) and 250 pounds (113 kg)—and he was praised for his ability to pursue a ballcarrier from sideline to sideline. The outspoken Jones coined the term “sack” for the act of tackling the quarterback behind the line of scrimmage, a facet of the game at which he excelled. He also popularized the head slap, a move (since banned) that involved a defensive player slapping an offensive lineman’s helmet as hard as he could at the snap in order to stun the blocker and thus gain an advantage off of the line. He was named All-Pro five consecutive times (1965–69) and the NFL Defensive Player of the Year twice, in 1967 and 1968.

Jones left the Rams in 1972 to play two seasons with the San Diego Chargers, before playing his final year with the Washington Redskins in 1974. During his 14-year professional career, he missed only five regular-season games and was named to eight Pro Bowls. Both during his playing days and after his retirement, Jones dabbled in acting and singing, and in his later years, he remained in the public eye through frequent appearances on television programs about the history of football, which highlighted his colorful personality. He was enshrined in the Pro Football Hall of Fame in 1980 and in 1994 was named to the NFL’s 75th Anniversary All-Time Team. Soon after his death in 2013, the NFL announced that it would begin presenting the Deacon Jones Award to the player who had the most sacks each season.