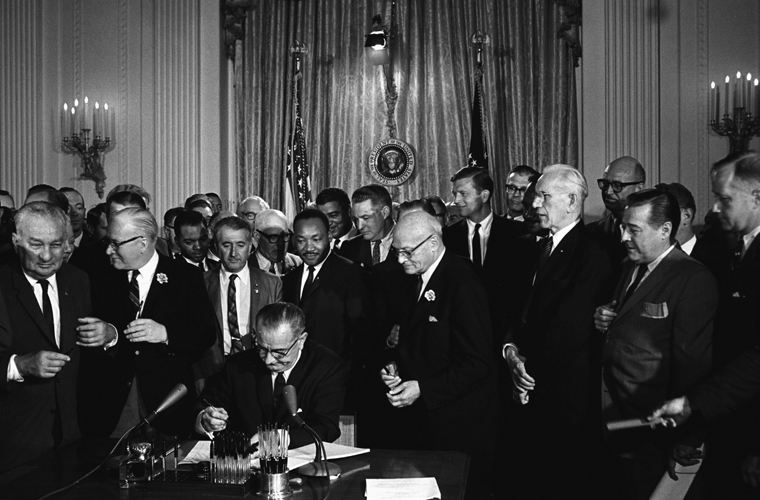 Although the economic well-being and prosperity of the United States have progressed to a level surpassing any achieved in world history, and although these benefits are widely shared throughout the Nation, poverty continues to be the lot of a substantial number of our people. The United States can achieve its full economic and social potential as a nation only if every individual has the opportunity to contribute to the full extent of his capabilities and to participate in the workings of our society. It is, therefore, the policy of the United States to eliminate the paradox of poverty in the midst of plenty in this Nation by opening to everyone the opportunity for education and training, the opportunity to work, and the opportunity to live in decency and dignity. It is the purpose of this Act to strengthen, supplement, and coordinate efforts in furtherance of that policy.

Congress adopted the Economic Opportunity Act of 1964 (EOA) (P.L. 88-452, 78 Stat. 508) when President Lyndon Johnson was in office. In his first State of the Union message, President Johnson declared the EOA would launch the “war on poverty.” At the signing ceremony, the president said the American people were making history:

For so long as man has lived on this earth poverty has been his curse. On every continent in every age men have sought escape from poverty’s oppression. Today for the first time in all history of the human race, a great nation is able to make and is willing to make a commitment to eradicate poverty among its people.

The philosophy behind the statute was not wealth distribution, but the belief that the government can and must provide poor people with opportunities to earn a decent living and maintain their families a comfortable living standard. President Johnson identified the constitutional basis for the legislation, stating, “The Congress is charged by the Constitution ‘to provide … for the general welfare of the United States.'”

The act employed two mechanisms to reach its lofty goal. First, it established eleven new programs that the Office of Economic Opportunity (OEO) would operate or supervise. The new programs included:

Second, recognizing that there were already many federal programs addressing the problems of the poor, the statute empowered the OEO Director to coordinate the anti-poverty efforts of all federal agencies. It directed those agencies to cooperate with the director and established an Economic Opportunity Council, chaired by the director and composed of the members of the president’s Cabinet, to consult with the director in carrying out his functions.

CIRCUMSTANCES LEADING TO THE ADOPTION OF THE EOA
The 1960s were a period of reform, sometimes referred to as the “Second Reconstruction.” Michael Harrington, a prominent writer on social issues, graphically described the plight of the poor in 1962 in The Other America: Poverty in the United States, a book said to have made a significant impression on both President Kennedy and President Johnson. President Kennedy’s brother, Attorney General Robert F. Kennedy, visited pockets of poverty in Appalachia, in urban slums, and on Native American reservations, and spoke out for remedial action.

The President’s Council of Economic Advisers’ Annual Report published in January 1964 focused on the “Problem of Poverty in America,” pulling together compelling statistics and showing that in a period of unprecedented prosperity, one-fifth of all families and nearly one-fifth of the total U.S. population—33 to 35 million people—were poor, having incomes below the poverty line (then $3,000 for a family of four) and that nearly one-half of all non-whites were living in poverty. It also revealed that, despite the decline from generation to generation in the proportion of the poor in the adult population, there were groups (for example, farm families and families headed by women) where the poverty rate was stubbornly stable and “the cruel legacy of poverty is passed from parents to children.”

In January 1964 the president asked R. Sargent Shriver, the head of the successful Peace Corps, which provided volunteers to assist poor people outside the United States, to head a Cabinet-level task force charged with developing a bill to carry on the war against poverty here at home. In March the president transmitted to Congress the administration’s bill, which was introduced in the House by Representative Phil M. Landrum, Democrat of Georgia, a southern conservative, and in the Senate by Senator Pat McNamara, Democrat of Michigan, a northern liberal. Subcommittees of the House Education and Labor Committee and a subcommittee of the Senate Labor and Public Welfare Committee held hearings, and each committee reported the bill favorably, with some amendments, but substantially intact.

After debating the bill for two days, the full Senate passed it, with limited amendments, on July 23, 1964, by a vote of sixty-one to thirty-four, with ten of thirty-two Republicans voting for it and the southern Democrats split eleven to eleven. The House debated the Senate-passed bill over four days in August, and by a vote of 226 to 185 adopted that bill, with a few amendments, on August 8, 1964. Twenty-two Republicans, 144 northern Democrats, and sixty southern Democrats voted for the bill, while 145 Republicans and forty southern Democrats opposed it. On the same day, the Senate, by a voice vote, adopted the House-passed bill. The president signed the bill on August 20, 1964.

Floor debate in the House, where the outcome of the final vote was in doubt, was highly partisan, according to the Congressional Quarterly. There was fierce competition for the votes of southern Democrats. The powerful Democratic chairman of the House Rules Committee, Howard W. Smith of Virginia, had delayed granting a rule for floor action, saying that the legislation was “too vague and indefinite.” He questioned Representative Landrum, manager of the bill, about racial integration at Job Corps centers. With Republican Representative Peter H. B. Frelinghuysen, Jr. of New Jersey, ranking member of the House Education and Labor Committee, taking the lead, Republicans in the House accused the administration of putting “unprecedented pressure” on members to vote, and of being locked out in developing a bipartisan bill.

They emphasized the far-reaching authority given to the OEO Director over other federal programs and in the funding of projects within states and local jurisdictions without the approval of governors, mayors, and county executives. Opponents attacked the job training and work experience provisions of the bill for focusing on low-skilled jobs or make-work when the economy needed highly skilled workers.

States’ rights were a driving force behind opponents’ arguments in both the Senate and the House. Two similar states’ rights amendments were accepted during floor debate in the Senate. One gave the governors veto power over the establishment of Job Corps centers in their states, provided they acted within thirty days of notice. The second gave the governors veto power over any Job Corps center or National Youth Corps or Community Action project contracted between the federal government and private agencies within their states. The House extended the governors’ veto to Community Action projects contracted with public agencies. Reflecting the opponents’ views was a Republican-sponsored alternative to the administration’s bill, which would have authorized $1.5 billion in grants to be expended over a three-year period (1965–67) through existing governmental agencies. Consistent with the Republicans’ opposition to the expansion of the federal bureaucracy, their alternative did not provide for the creation of any new anti-poverty operating or coordinating agency.

The fact that the bill did not preclude aid to poverty projects sponsored by sectarian schools or institutions was also debated. An amendment to bar grants to sectarian schools was defeated in the Senate. During the time the bill was being debated, President Johnson was running for re-election, and the Republicans were selecting their candidate, Sen. Barry Goldwater of Arizona, to run against him. The anti-poverty program was frequently discussed during the presidential primaries and in the fall campaign. Senator Goldwater was a leader in opposing the bill and its reliance upon the federal government to address the problems of the poor. He accused the president of “playing politics with poverty.”

From the beginning, Republicans, often with the support of southern Democrats, attempted to dismantle the OEO and transfer its operating programs to “old-line” departments and agencies. While Congress ultimately repealed the Economic Opportunity Act in 1981, the first year of the presidency of Ronald Reagan, many of the programs established by the 1964 act or created by OEO have survived, often with enhanced budgets and changes in name and configuration. Examples include Head Start and Work Study which are administered by the Department of Education; and Legal Services which is now a federally funded corporation under a presidentially appointed board.

Neither the act nor OEO ever had the profound impact on society envisioned by President Johnson and the proponents of the legislation—bringing about the elimination of poverty. Commentators have strongly debated the reasons for this result. According to Michael Harrington in The New American Poverty, the act failed to achieve its purpose “to eliminate the paradox of poverty in the midst of plenty” because of the Vietnam War and the lack of funding. For the first five fiscal years (1965–69), Congress appropriated a total of $7.634 billion to fund all EOA programs. The Council of Economic Advisers, in its January 1964 report, had stated that “about $11 billion a year would bring all poor families up to the $3,000 income level we have taken to be the minimum for a decent life.”

Other commentators say the anti-poverty program was misdirected. Daniel Patrick Moynihan, a member of the poverty task force (later Senator representing New York), has pointed to the lack of any provision for the employment of adult men as a crucial decision. Another critic, James L. Sundquist, also a task force member, says that Sargent Shriver mistakenly opted for OEO to be an operating agency, focusing on administering programs such as Job Corps and VISTA, rather than coordinating the many programs of the federal government impacting poverty.

On balance, while the label “war against poverty” reflected the hyperbole of politics, the Economic Opportunity Act focused the attention of the nation and the agencies of the federal government on poverty and the need for coordinated, multidimensional approaches to reduce, if not to eliminate, its root causes. The statute launched several effective programs that demonstrated what could be accomplished and challenged the citizenry and government not to accept the adage that the “poor will always be with us.”