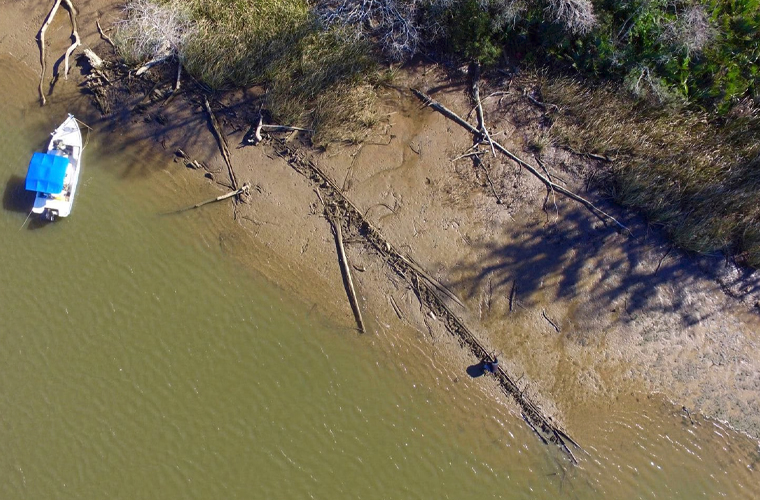 The last ship to bring slaves to the U.S. was torched to hide the crime. Its remains may have just been found.

More than 50 years after the international slave trade was outlawed in the United States, an Alabama plantation owner bet a friend that he could smuggle in a group of slaves from Africa aboard an 86-foot sailboat named the Clotilda.

But in July 1860, on their way back to Alabama with some 110 enslaved men and women from West Africa, the boat’s captain and crew started to worry that the authorities were on to them. After unloading their captives under cover of night, they ditched the Clotilda, setting it ablaze on the banks of the Mobile-Tensaw Delta.

Now, a reporter in Alabama may have found evidence of their illicit voyage for the first time—thanks to the cold weather system that produced the notorious “bomb-cyclone” in January 2018. To find the possible location of the wreck, Ben Raines of AL.com relied on historical records—including the journal of the vessel’s captain, William Foster, and a newspaper interview given 30 years later by the expedition’s financier, Timothy Meaher—as well as the memories and family lore of local residents.

As it turned out, the extremely low tides produced by the cold front that hit the Eastern Seaboard had revealed what appeared to be the burned-out wreckage of a ship alongside a swampy island in the delta, a few miles north of Mobile. When he saw the iron spikes and charred wood poking out of the mud, “I just had this overwhelming feeling,” Raines said in a video accompanying his article. “That’s the final resting place of the Clotilda.”

Ever since Meaher boasted about his scheme to a newspaper reporter in 1890, the fate of the Clotilda has stood out as an intriguing chapter in the history of slavery in the United States. It’s even more important in Alabama, where the slaves brought from what is now Benin, in Africa, aboard the Clotilda settled in Mobile after emancipation, in an area that became known as “Africatown.”

Unlike the vast majority of African Americans, the descendants of the men and women who made their trans-Atlantic voyage aboard the ship (a group that reportedly includes the musician Amir “Questlove” Thompson, of the Roots and Tonight Show fame) can pinpoint exactly how and when their ancestors came to the United States.

Historian Sylviane Diouf explored the story of the Clotilda in-depth in her 2007 book Dreams of Africa in Alabama, but numerous searches for the slave ship itself had turned up nothing—until now.

Using a drone, Raines took aerial photographs and video of the presumed wreck after discovering it. He also visited the site with a shipwright who knew the construction techniques used to build old wooden vessels and a team of archaeologists from the University of West Florida. All agreed that the wreck definitely dated to the mid-1850s, when the Clotilda was built, and that it showed signs of being burned. The beam, or width, of the wreck, also matched historical descriptions of the slave ship exactly.

According to Raines, the archaeologists have speculated that there may be iron manacles and other artifacts buried in the hold of the ship, which would help confirm its identity as the last slave ship to arrive on these shores. But we may have to wait a while for this kind of confirmation, he writes, as “Digging into the past will require both federal and state permits and a lot of money.”