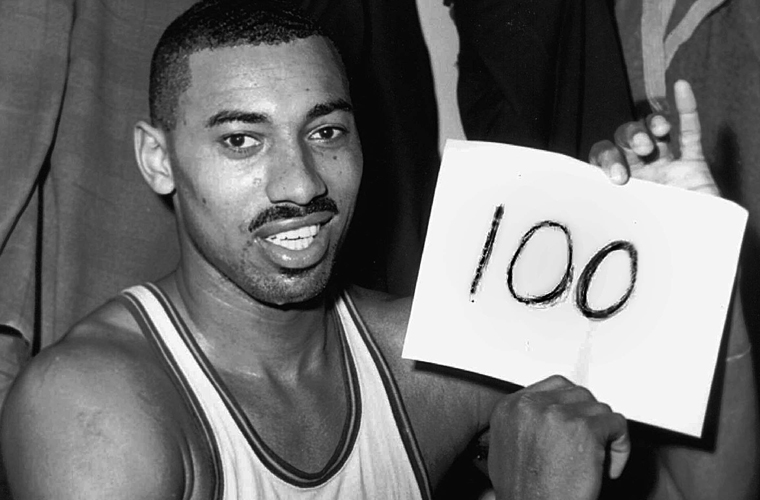 Wilt Chamberlain, in full Wilton Norman Chamberlain, bynames Wilt the Stilt and the Big Dipper, (born August 21, 1936, Philadelphia, Pennsylvania, U.S.—died October 12, 1999, Los Angeles, California), professional basketball player, considered to be one of the greatest offensive players in the history of the game. More than 7 feet (2.1 meters) tall, Chamberlain was an outstanding center. During his 1961–62 season he became the first player to score more than 4,000 points in a National Basketball Association (NBA) season, with 4,029, averaging 50.4 points per game.

As a teenager, Chamberlain was sought after by more than 100 colleges and universities after his play at Overbrook High School in Philadelphia. He played two years (1956–58) at the University of Kansas, after which he joined the Harlem Globetrotters for a year (1958–59). He went to the NBA in 1959, playing with the Philadelphia Warriors (1959–65; the team moved and became the San Francisco Warriors in 1962), going back to Philadelphia to play for the 76ers (1965–68), and finishing his career with the Los Angeles Lakers (1968–73). Chamberlain had a long-standing (but good-natured) rivalry with Boston Celtic Bill Russell, and many credits the increase in the popularity of professional basketball to the excitement generated around games featuring these two players.

With 31,419 points scored over the span of his professional career, Chamberlain held the NBA record for points scored until 1984, when his record was surpassed by Kareem Abdul-Jabbar. Other highlights of Chamberlain’s NBA career include a career average of 30.1 points per game, an NBA record until it was broken by Michael Jordan, and a career average of 22.9 rebounds per game. Chamberlain owns the top four single-season scoring averages in league history, including his NBA-record 50.4 points per game mark in 1961–62 (the other three coming, in descending order, during the 1962–63 [44.8 points per game], 1960–61 [38.3], and 1959–60 [37.6] seasons). His 100 points against the New York Knicks in Hershey, Pennsylvania, on March 2, 1962, still stands as professional basketball’s top single-game feat. He also scored 56 or more points 61 times in regular-season games, tallied 36 field goals in a game (March 2, 1962), and captured 55 rebounds in a game (Nov. 24, 1960). Chamberlain’s proudest feat was never having fouled out of an NBA game. He was elected to the Naismith Memorial Basketball Hall of Fame in 1978.