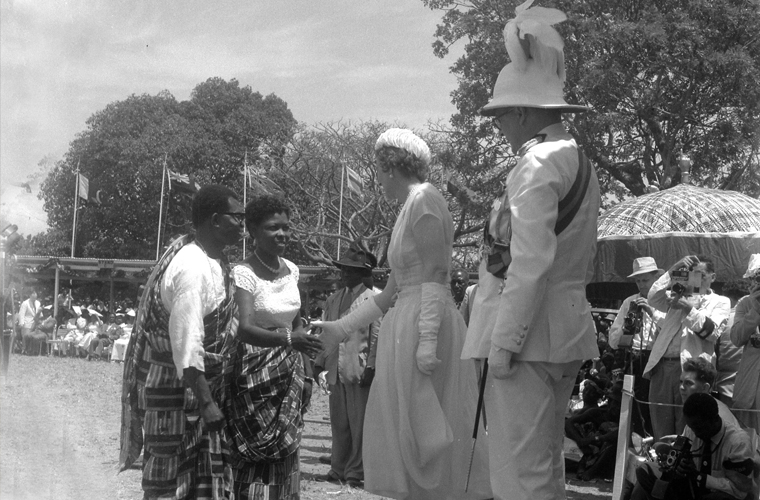 After years of suffering under British colonial rule, Ghana, known as the Gold Coast, became the first African State to achieve independence in 1957.  Ghana is located on West Africa’s Gulf of Guinea, a few degrees north of the equator.  It was one of the richest countries in Africa before its conquest by the British.

Attempting to replace the slave trade with “legitimate trade” (lawful trade) in British-manufactured goods, Great Britain increasingly intervened in the affairs of Coastal Africa.  In 1821, the British government took control of the Gold Coast’s possessions from a private African company of merchants. According to Kwame Appiah and Henry Louis, in 1844, the Fanti (the most numerous of the coastal people) rulers signed an agreement with the British that became the legal stepping stone to colonial status for the coastal area (Appiah, 830). Because of the Ashantis (a people who lived in central Ghana) incursions in the coastal region threatened commercial interests, Great Britain fought a series of campaigns against the Ashantis (1822-1900). The British burned the Ashanti capital of Kumasi and forced the Ashanti to accept a humiliating treaty.  Great Britain gradually conquered the peoples to the North of Ashanti between 1896 and 1910 when the Ashanti State lost power and prestige.

In 1902, the British annexed Ashanti and Northern territories. Later, Britain declared Ashanti, Northern territories protectorate and the territory of Togoland (it was mandated to the British after World War One) which were known geographically as “The Gold Coast,” a crown colony. In the Gold Coast, nationalist opposition began to form during the 1920s when Great Britain introduced an indirect rule to traditional authorities. During the1940s, the movement toward independence gained momentum after police opened fire in Accra (capital of Ghana) on a large contingent of former servicemen who were peacefully carrying a petition to the Governor to seek redress of their grievances.  Joseph Danquah and other leading nationalists founded the United Gold Coast Convention (UGCC) in August 1947 and invited Kwame Nkrumah, the first president of Ghana, to lead the group’s campaign for representative self-government (but Nkrumah and Danquah were jailed after troops fired on demonstrators and a riot erupted in 1948).

In 1949, the Convention People’s Party (CPP), led by Nkrumah organized workers and farmers for the first time in a mass movement for independence and staged strikes.  A new constitution was introduced by Nkrumah’s government to provide direct election by universal suffrage in 1954. But his government was opposed by the National Liberation Movement (NLM), led by Kofi Busia and based on the Asante region.  NLM criticized CPP for its limitation on the powers of chiefs.  As a result of this, the NLM pushed for the establishment of a federal state with regional governments, while CPP advocated a unitary state.  Another constitution was approved on April 29, 1954, establishing a cabinet comprised of African ministers that were drawn from an all-African legislature chosen by direct election.  In the election, CPP won the majority of seat in the new legislative assembly.

Prime Minister Nkrumah’s Gold Coast government issued a white paper containing proposals for Gold Coast independence in May 1956.  The British government agreed to a firm date for independence when a majority of British Togoland residents voted for unification with an independent Gold Coast.  On March 6, 1957, the state of Ghana, named after the medieval West African empire, became an independent country within the Commonwealth of Nations.