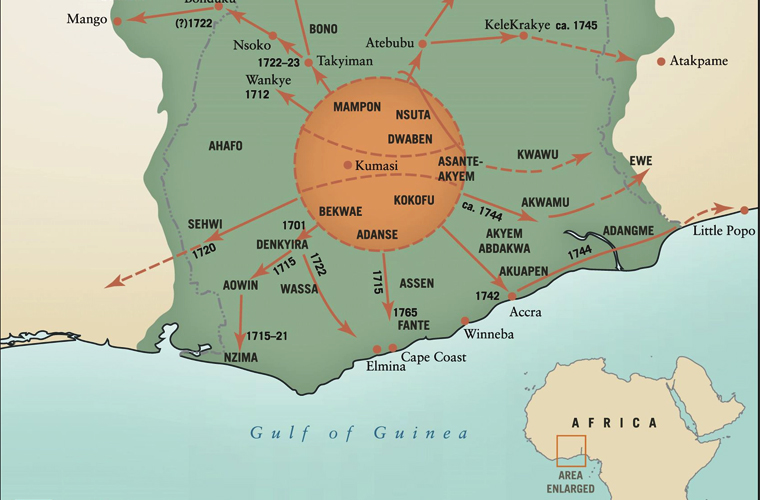 Asante empire, Asante also spelled Ashanti, West African state that occupied what is now southern Ghana in the 18th and 19th centuries. Extending from the Comoé River in the west to the Togo Mountains in the east, the Asante empire was active in the slave trade in the 18th century and unsuccessfully resisted British penetration in the 19th.

In their struggle against the suzerain state of Denkyera and lesser neighboring states, the Asante people made little headway until the accession, probably in the 1670s, of Osei Tutu. After a series of campaigns that crushed all opposition, he was installed as Asantehene, or king of the new Asante state, whose capital was named Kumasi. His authority was symbolized by the Golden Stool, on which all subsequent kings were enthroned.

From the beginning of the 18th century, the Asante supplied slaves to British and Dutch traders on the coast; in return, they received firearms with which to enforce their territorial expansion. After the death of Osei Tutu in either 1712 or 1717, a period of internal chaos and factional strife was ended with the accession of Opoku Ware (ruled c. 1720–50), under whom Asante reached its fullest extent in the interior of the country. Kings Osei Kwadwo (ruled c. 1764–77), Osei Kwame (1777–1801), and Osei Bonsu (c. 1801–24) established a strong centralized state, with an efficient, merit-based bureaucracy and a fine system of communications.

In 1807 Osei Bonsu occupied southern Fante territory—an enclave around British headquarters at Cape Coast; in the same year, Great Britain outlawed the slave trade. Declining trade relations and disputes over the Fante region caused friction over the following decade and led to warfare in the 1820s. The Asante defeated a British force in 1824 but made peace in 1831 and avoided conflict for the next 30 years.

In 1863, under Kwaku Dua (ruled 1834–67), the Asante again challenged the British by sending forces to occupy the coastal provinces. In 1869 the British took possession of Elmina (over which Asante claimed jurisdiction), and in 1874 an expeditionary force under Sir Garnet Wolseley marched on Kumasi. Though Wolseley managed to occupy the Asante capital for only one day, the Asante were shocked to realize the inferiority of their military and communications systems. The invasion, moreover, sparked numerous secessionary revolts in the northern provinces. The old southern provinces were formally constituted the Gold Coast colony by the British later in 1874. Asante’s king Kofi Karikari was then deposed, and Mensa Bonsu (ruled 1874–83) assumed power. He attempted to adapt the agencies of Asante government to the changed situation. Although he reorganized the army, appointed some Europeans to senior posts, and increased Asante resources, he was prevented from restoring Asante imperial power by the British political agents, who supported the northern secessionist chiefs and the opponents of the central government in Kumasi. The empire continued to decline under his successor, Prempeh I (acceded 1888), during whose reign, on January 1, 1902, Asante has formally declared a British crown colony, the former northern provinces being on the same day separately constituted the Protectorate of the Northern Territories of the Gold Coast.

An Asante Confederacy Council was established under British rule in the 1930s, and the Asantehene was restored as a figurehead sovereign.