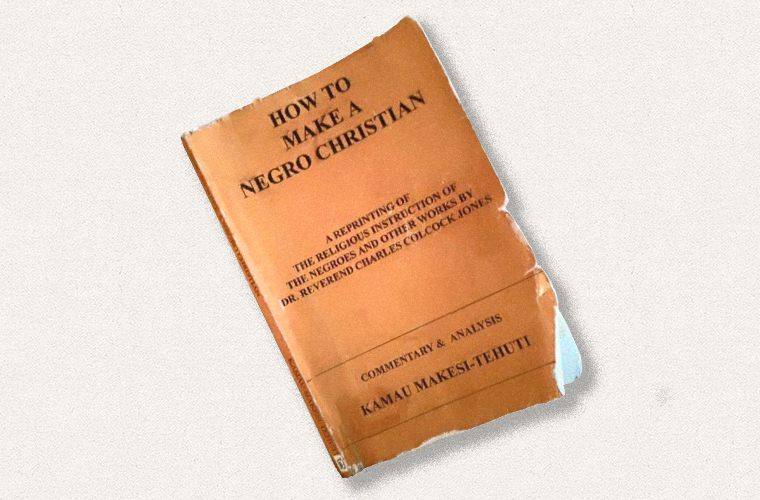 Charles Colcock Jones’ The Religious Instruction of the Negroes in the United States is an extended exhortation urging white ministers and slaveowners to attend to the spiritual needs of slaves and free blacks. The book is broken into four parts. The first part is an historical sketch of slavery in the Colonies and the United States, with a focus on missionary and religious efforts directed towards the African slaves. This account goes from 1620 to 1842, going year by year after 1792. Jones closes this first part with a summary of each denomination and each state.

The second part treats the “Moral and Religious Condition” of slaves and free blacks, blaming their circumstances for their lack of virtue. Jones especially calls attention to their poverty and lack of education. He describes their ignorance of Christianity, their general lack of character, and their prevailing vices, noting that in the end, they are totally dependent on white men for the ability to overcome these limitations. In light of this description, Jones goes on in the third part to describe the obligations of the Christian church to rectify these problems. He asserts that the religious education of the African part of the population is a duty no Christian can ignore, then goes on to refute a whole catalog of excuses and objections to that assertion. In addition, he lists several benefits of religious instruction.

The final part of the book proposes some strategies for implementing programs of religious instruction for slaves, making recommendations for Sabbath services as well as weekday plantation meetings. Jones says that the Christian gospel must be presented in a way that is intelligible to uneducated slaves, and must be inculcated early in childhood when possible. The guiding principle he describes for dealing with the condition of the slave is to be only concerned with the spiritual, not the secular, political, or civil. Jones concludes with pointed exhortations to masters, ministers, and the church at large, calling them all to devote more attention to the religious instruction of the African part of the American population.

“What will be the benefit of giving enslaved Africans Christianity?”

“It is a matter of astonishment, that there should be any objection at all; for the duty of giving religious instruction to our Negroes, and the benefits flowing from it, should be obvious to all. The benefits, we conceive to be incalculably great, and [one] of them [is] there will be greater subordination amongst the Negroes (page 52).”

In 1832, a sermon was given in the south entitled, The Religious Instruction of the Negro. By 1906, Negro church followings increased by 57.6 percent. Said another way, enslaved Africans were being transformed into negro Christians at alarmingly fast & successful rates.

HOW TO MAKE A NEGRO CHRISTIAN reprints the entire sermon, so you can read it for yourself and adds highly critical commentary. Read about the exact plans constructed by one Dr. Reverend Charles Colcock Jones to ‘biblize’ us-the enslaved Afrikan population and take notice at what happens on Sundays in the majority of the Afrikan/Black communities today. Below are a few choice quotes from the so-called ‘Apostle of the Blacks.’

“And having our plantations, the time and persons of our servants wholly under our control, we can arrange the manner and frequency of our instructions, as we please, and the period of these instructions with as
much punctuality, and with as little interruption, as we can arrange the morning and evening devotions of our own fire-side. Our very children might become, to some extent, teachers, by reading to them plain portions
of the Bible, or plain Tracts and things of such sort.” page 67

Dr. Joseph Jones and Charles Colcock Jones Jr., Princeton students from Georgia who served in the Confederate Army during the Civil War.

“Will the authority of the Masters be weakened by instructions of this sort? No, it will be strengthened. And we believe that their authority can be strengthened and supported in this way only; for the duty of obedience will never be felt and performed to the extent that we desire it unless we can bottom it on religious principle.” page 72

“In order to induce a sense of guilt, [you] must charge upon the Negroes those particular sins to which they are so much addicted, and expose their the enormity and consequent punishment in the world to come.” page 55

“The matter of preaching to the Negroes should deal much in parables, historical events, miracles, lives of men holy and profane, as found in the Bible, and the great and wonderful works of God: all in illustration
of doctrine and practice. He must reason much by illustration. And as the great majority of them do not read, he should read and explain God’s holy word to them constantly, and as extensively as possible.” page 83

“It becomes us to inquire, if, in the history of the world, any people have ever been thoroughly Christianized, without the employment of their own agency to a large extent, in diffusing the gospel amongst themselves? I
know of no such people.” page 86

“Let them [the slave masters] invest a little capital in the minds and hearts of their slaves and it will prove to all concerned, profitable investment for time and for time and for ETERNITY page 102