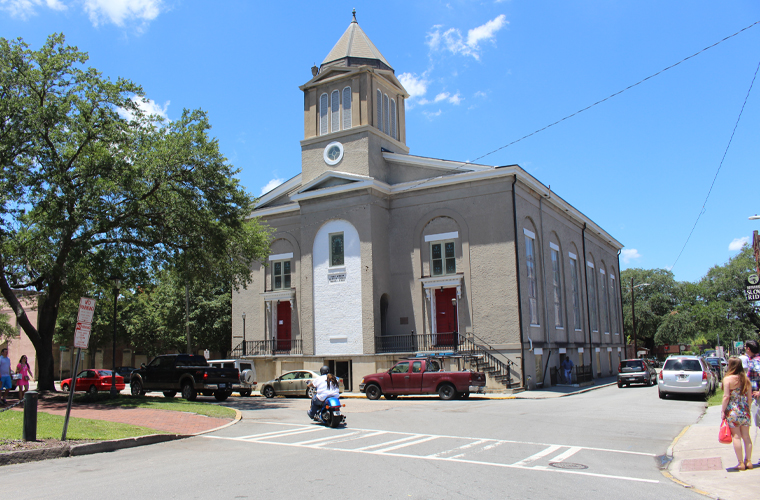 The First African Baptist Church in Savannah is one of the oldest African American Baptist churches in North America. It was not formally established until 1788, the origins of the First African Baptist Church date to 1778 when George Liele organized a small congregation of black Baptists in Savannah. Born into slavery in Virginia in 1750, Liele was later brought to Georgia, where he experienced a profound religious awakening and resolved to lead a life of Christian service. With his master’s blessing, Lielehas ordained a Baptist minister in 1775 and began traveling the Savannah River, preaching the gospel to slaves living in South Carolina and Georgia.

During the Revolutionary War (1775-83) Liele encouraged his followers to support the British, who pledged to regard African Americans as free men in exchange for their service to the crown. Though many African Americans were reenslaved when the British were forced to evacuate their Tybee Island headquarters in 1782, after a three-year occupation, a number of Liele’s followers fled the country, founding settlements and churches in Jamaica, Nova Scotia (in Canada), and Sierra Leone.

Andrew Bryan, who was baptized by Liele in 1782, carried on the ministry in Savannah after the war, holding regular worship services with the remaining members of Liele’s congregation, despite suffering abuse from local whites. In January 1788, several years before white Baptists established a church in Savannah, church officials ordained Bryan and officially recognized the First Colored Church, renamed the First African Baptist Church in 1822. Bryan purchased his freedom a year and a half later and secured property on Mill Street, in Oglethorpe Ward, for the construction of a church to house his growing congregation.

But despite their large number, Savannah’s black Baptists remained confined by the region’s code of racial etiquette. Andrew Marshall, Bryan’s successor, ran afoul of the church’s governing authority in 1832 when he extended an invitation on behalf of his congregation to a white evangelist who preached equality of the races before God. The white Sunbury Baptist Association suspended Marshall from his post and encouraged critics within the congregation to break ranks with the church’s leadership. Though Marshall was later reinstated, 155 members withdrew from First African to form the Third African Baptist Church, later renamed First Bryan Baptist Church.

Following the schism, both First African and First Bryan churches continued to grow, and relations between the two congregations remained amicable until the 1880s when their ministers advanced competing claims that theirs was the oldest black church in North America. Because they had retained ownership of the church originally constructed by Andrew Bryan following the schism, representatives from First Bryan claimed that their congregation was the rightful heir to Liele’s ministry. First African, having retained the body’s original name and the vast majority of its congregants, insisted otherwise.

In 1888 the Missionary Baptist Convention of Georgia appointed a special committee to consider the matter and render a judgment in advance of the organization’s centennial celebration that June.

After reviewing the relevant documents and church histories, the committee determined that First African was the direct descendant of Bryan’s original congregation and therefore North America’s oldest black church. Though tensions subsided over time, both congregations still maintain similar claims; First African identifies itself as “the oldest black church in North America,” while First Bryan claims to be the “oldest continuous black Baptist church in America.” Augusta’s Springfield Baptist Church claims a similar distinction, billing itself as the oldest African American congregation in the United States on the basis that it is descended from a church founded in 1773 in Silver Bluff, South Carolina.

First African retained its prominence from the late nineteenth through the twentieth centuries, with its ministers playing important leadership roles in the life of Savannah’s black community. The Reverend E. K. Love, the church’s sixth minister (1885-1900), was instrumental in the 1890 founding of the Georgia State Industrial College for Colored Youth (later Savannah State University).

First African has occupied its present location on Montgomery Street since 1859. Its museum, located on the church grounds, houses artifacts and church memorabilia dating from the eighteenth century.