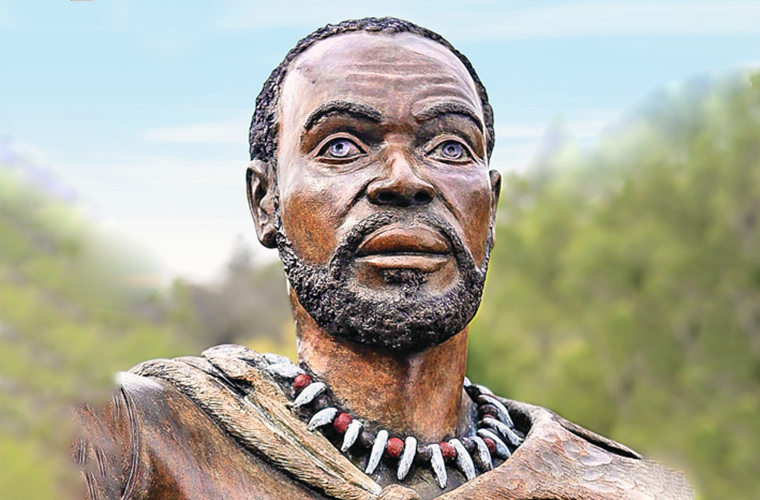 King Hintsa was born in 1789 and died a painful and brutal death on the 12th February 1835 along the banks of Nqabara river (Lower Mbhandcolo) He was the 4th paramount Chief of the Gcaleka sub-group of the Xhosa nation from 1820 until his death in 1835.

The battle of Amalinda was fought when he was still a young man. He was a nominal commander in Chief of Gcaleka forces in 1834. The fighting regent was General Nqoko. ln 1834, backed by mounted men. Colonel Harry Smith harassed Gcaleka rounding up thousands of heads of cattle and burning down homesteads. Largely unarmed, the Gcaleka found it very difficult to resist. On the 29th of April Harry Smith brought back his force to Durban’s Camp and sent envoys to “treat for peace”.

Invited to peace talks by Governor Harry Smith, the British demanded 50 000 cattle in compensation for the 1834 war, and Hintsa was to tell all Xhosa chiefs to stop fighting the British. The British also insisted that Hintsa instruct the Rharhabe to cease hostilities although Hintsa made it clear that he could not restrain or compel all the AmaXhosa to do what they wished. Hintsa was then held captive until the terms were met, Hintsa sent word to Maqoma military commander, telling him to hide the cattle. On the other hand, a group of Abambo who came from the now Kwa Zulu Natal or Drakensburg as refugees following a devastating Mfecane wars were given land by Amagcaleka under Hintsa and were absorbed. They were granted the land between the Great Fish River and Keiskama Rivers.

King Hintsa’s Death
On May 12, 1835, when he was about 45 years old, was riding as a prisoner in the company of British soldiers led by Governor Harry Smith. Hintsa was being guarded on the ride back over the Kei and the Fish rivers by a cop of guides led by George Southey. Soon after breakfast, Hintsa asked Smith: “What have the cattle done that you want them? Why must I see my subjects deprived of them?” To which Smith replied, “That you know far better than I do.” Soon after that Hintsa spurred his horse forward and galloped away. Smith gave chase and twice tried to fire on the fleeing monarch.

Twice his pistols malfunctioned but he caught Hintsa and pushed him off his horse. Hintsa got up and ran, still carrying his assegai. “Shoot, George, and be damned to you,” cried Smith to Southey. Southey fired and hit Hintsa in the leg but still, he ran. Southey fired again. Hintsa was again hit but ran into a stream. “Be damned to you,” cried Smith to Southey, “Shoot again.” By this time Hintsa was in deep water and couldn’t stand properly. He threw his spear but it landed harmlessly near Southey, who took aim again. “Mercy,” cried the King. And again. “Mercy.” But there was to be no mercy.

Southey, whose Xhosa was fluent, fired, and hit Hintsa in the head, killing him. Southey got to the body first and took off Hints’ brass body ornaments for himself. Others grabbed for his beads and bracelets. Southey or his brother William cut off one of the Hints’ ears as a trophy and someone else cut off the other.

A doctor traveling with them was seen trying to pull out some of the Hints’ teeth. Later, even Smith could no longer bear the barbarity he had caused and ordered Hints’ body dropped from his horse and to be left in the bush for his followers to find. Hintsa was captured by the British during the Cape Frontier Wars in 1835 and in extenuating circumstances was shot and killed trying to escape resulting in him becoming a martyr for the Xhosa people. His body was subsequently dismembered by troops in search of grisly momentoes and his head had been preserved and taken back to Britain.”

His Leadership and Legacy
He is remembered among the Xhosa people for his bravery and what he stood for. He was a natural leader with a strong personality that commanded respect. A tall, robust man, wearing a magnificent leopard-skin cloak, a bass belt around his waist, brass bracelets, an ivory amulet above his elbow, and a necklace of red and white beads.

These days the Xhosa people know about him through poems and bedtime stories and he is often compared to “Shaka ka Senzangakhona”, commonly known as “Shaka Zulu”.

In 1996 Nicholas Tilana Gcaleka, a descendant of King Hintsa claimed to have returned the 161-year-old skull of King Hintsa from Scotland. He also claimed that he was the great-great nephew of Hintsa and was called on by the spirits of his ancestors to go to Scotland to find Hintsas’ head. The Gcaleka Xhosa Monarch, King Xolilizwe Sigcau, and his court refused to sanction the planned burial of the skull because they said it was not the disembodied head of Hintsa.

Amaxhosa kingdom has institutionalized in 1999 the King Hintsa Bravery Award for leaders that live and act in the spirit of Hintsa kaKhawuta. It was awarded to Jacob Zuma in 2012. Earlier notable earners of the award include Robert Mugabe from Zimbabwe. The award is being conferred by the ruling Xhosa king.