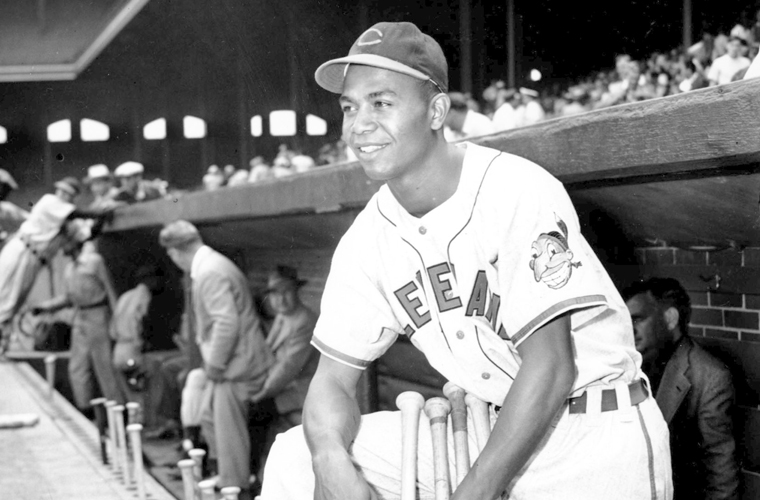 The son of a semipro baseball player, Doby excelled at baseball, basketball, and football, earning an athletic scholarship to Long Island University in New York. Doby played for the Newark Eagles of the Negro National League in 1942 and 1943 before enlisting in the U.S. Navy. He returned to the Newark Eagles for the 1946 and 1947 seasons until Bill Veeck signed him to play with the Cleveland Indians at the end of the 1947 season. Doby, whose own father had died when he was 8 years old, spoke of Veeck as a second father. When some of his new teammates refused to shake his hand, Veeck got rid of them before the next season began. Like Jackie Robinson, Doby was excluded from many segregated hotels and restaurants frequented by teammates, received numerous death threats, and had to overcome the animosity of other players and fans; however, since the papers were already reporting Robinson’s troubles, Doby’s struggles were mostly ignored at the time.

In 1948 Doby starred as the Indians’ center fielder, batting .301, and his home run won a World Series game. A power hitter, he batted .326 in 1950, when he led the league in on-base percentage; twice he slugged 32 homers to lead the league, and his 126 runs batted in (RBIs) led the Indians to another pennant in 1954. Doby was an all-star for 7 of his 13 years (1947–59), which included time with the Chicago White Sox and the Detroit Tigers. He came out of retirement in 1962 to play with the Chunichi Dragons in Japan for one season. He then went on to coach for the Montreal Expos, Indians, and White Sox, before Veeck made him the White Sox manager in 1978, the second African American major league manager. Doby was elected to the Baseball Hall of Fame by the Veterans Committee in 1998.