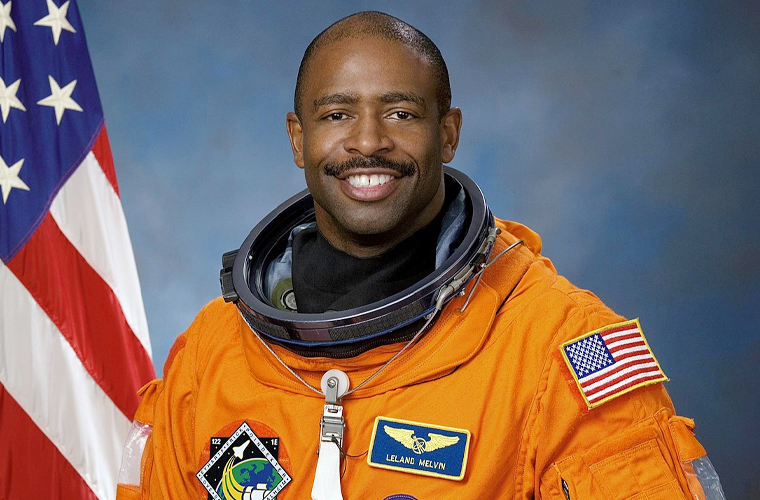 Leland Devon Melvin (born February 15, 1964, in Lynchburg, Virginia) is an American engineer and a former NASA astronaut. He served on board the Space Shuttle Atlantis as a mission specialist on STS-122, and as mission specialist 1 on STS-129. Melvin was named the NASA Associate Administrator for Education in October 2010.

Melvin was a wide receiver on the University of Richmond football team from 1982–85. Melvin is first on the University of Richmond’s career lists with 198 receptions for 2,669 yards (2,441 m), and fourth on Richmond’s career touchdown receptions list with 16. He was an AP honorable mention All-America selection in 1984 and 1985 and second team Apple Academic All-America in 1985.

Melvin caught at least one pass in every game he played as a Richmond Spider (39).

He was in the University of Richmond Athletic Hall of Fame Inductee Class of 1996–97 and selected for the All-UR Stadium Team in 2009, which commemorates the greatest Spiders to have played at the stadium in its 81-year history. Melvin was chosen by the Detroit Lions in the 11th round of the 1986 NFL Draft as a wide receiver. During training camp, he pulled a hamstring and was released from the team.

He reported to the Dallas Cowboys the following spring but pulled a hamstring a second time, officially ending his professional football career. He also participated in the Toronto Argonauts football training camp.

Selected as an astronaut in June 1998, Melvin reported for training in August 1998. He has since been assigned to the Astronaut Office Space Station Operations Branch, and the Education Department at NASA Headquarters, Washington, D.C. As co-manager of NASA’s Educator Astronaut Program, Melvin has traveled across the country, discussing space exploration with teachers and students, and promoting science, technology, engineering, and mathematics. He next served in the Robotics Branch of the Astronaut Office. In October 2010, Melvin was named as associate administrator for the Office of Education. As associate administrator, Melvin was responsible for the development and implementation of NASA’s education programs that inspire interest in science and technology and raise public awareness about NASA goals and missions. He retired from NASA in February 2014.

STS-122 (February 7 to February 20, 2008) was the 24th shuttle mission to visit the International Space Station. Mission highlight was the delivery and installation of the European Space Agency’s Columbus Laboratory. It took three spacewalks by crew members to prepare the Columbus Laboratory for its scientific work, and to replace an expended nitrogen tank on the Station’s P-1 Truss. STS-122 was also a crew replacement mission, delivering Expedition-16 Flight Engineer, ESA Astronaut Léopold Eyharts, and returning home with Expedition-16 Flight Engineer, NASA Astronaut Daniel Tani. The STS-122 mission was accomplished in 12 days, 18 hours, 21 minutes and 40 seconds, and traveled 5,296,832 statute miles in 203 Earth orbits.

STS-129 (November 16 to November 29, 2009) was the 31st shuttle flight to the International Space Station. During the mission, the crew delivered two Express Logistics Carriers (ELC racks) to the International Space Station, about 30,000 pounds of replacement parts for systems that provide power to the station, keep it from overheating, and maintain proper orientation in space. The mission also featured three spacewalks. The STS-129 mission was completed in 10 days, 19 hours, 16 minutes and 13 seconds, traveling 4.5 million miles in 171 orbits, and returned to Earth bringing back with them NASA Astronaut, Nicole Stott, following her tour of duty aboard the space station.