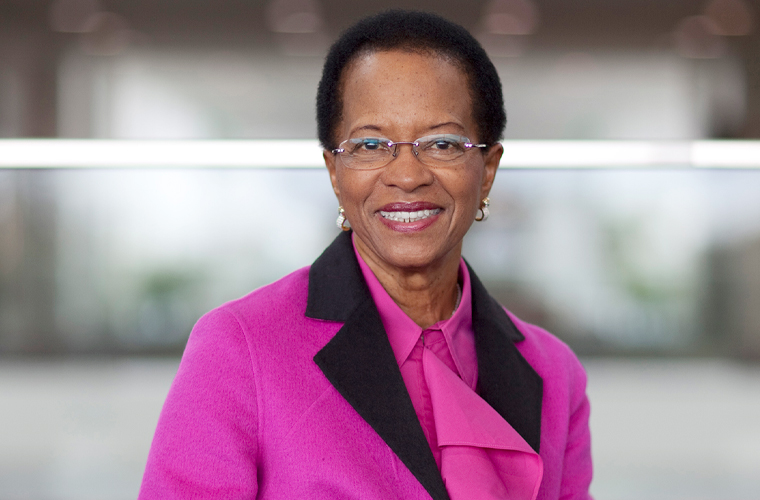 Reatha Clark King is a chemist whose long scientific career includes breakthroughs in fluoride research that advanced the National Aeronautics and Space Administration’s (NASA) space program. She has devoted the second half of her career as an educator and administrator to expanding opportunities for education available to students from poor backgrounds.

Reatha Belle Clark King was born on April 11, 1938, in Pavo, Georgia, one of three children born to Willie and Ola Watts Campbell Clark. Her parents, an illiterate farm worker and a domestic servant, divorced when she was young. King’s mother then moved with her children to Moultree, Georgia, where she found work as a maid. King’s early life centered around the institutions of church and school, although the family was so poor that she often had to leave school to pick cotton or tobacco for $3 per day. “Those were bitter moments,” King recalls in the book True North: Discover Your Authentic Leadership by Bill George, “because white children didn’t have to leave school. That contrast was so clear and so wrong.”

She found strength in the Mt. Zion Baptist Church, where the older women, known as “sisters,” were well aware of King’s keen intellect and strong work ethic: “They kept an eye on me, and encouraged me to overcome unjust barriers against black people,” she told George. King graduated from high school in 1954 as the valedictorian of her class.

King attended Clark College in Atlanta on a scholarship. She planned to become a high school home economics teacher, so she could help her family financially, but her life dramatically changed direction when she enrolled in an introductory chemistry class required for her major. The professor, Alfred Spriggs, was an African-American chemist with a doctoral degree from Washington University. His dynamic teaching style inspired King to change her career path and pursue a doctorate. Her older sister, who had joined the U.S. Army Nurse Corps, offered to support the family so that King could go to graduate school. King majored in physical chemistry at the University of Chicago, focusing on thermochemistry. She received her doctorate in 1963.

After a six-month job search, King accepted a research position with the National Bureau of Standards in Washington, D.C. Her first goal as a team leader was to develop a material able to contain the corrosive compound oxygen difluoride. King’s discoveries regarding the effect of heat on metallic alloys—specifically, her invention of a coiled tube that allowed hot liquids such as fuel to cool instead of exploding—were crucial for rocket design in the NASA space program. King was known as the Bureau for her dedication and professionalism, often staying at the lab overnight to analyze new data. She was cited with an outstanding performance rating and won the Meritorious Publication Award for a paper on fluorine flame calorimetry (the science of measuring the heat of chemical reactions). King was keenly aware of the additional hurdles represented by both her race and gender. “You had to reach down deep,” she says in True North, “to reinforce your courage.”

King returned to academia in 1968 to teach at York College, an inner-city school in New York City, where she was soon appointed an assistant dean of natural sciences and mathematics. During this time, she also obtained a master’s degree in business administration from Columbia University. King left York in 1977 to assume the presidency of Metropolitan State University in Minneapolis, Minnesota. At Metro State, King worked tirelessly to increase educational opportunities for women and minorities. During her tenure, the college increased its number of graduates fivefold. “I realized early in life,” King said to Christine Reslmaier, “that education is our best enabling resource, that technical skills are important, and that my stamina for championing educational opportunity for all people is inexhaustible.”

While at Metro State, King was asked by the chief executive officer of General Mills to become president and executive director of the General Mills Foundation, as well as vice president of General Mills, Inc., positions she accepted in 1988. Over the course of the next fourteen years, she increased the charitable organization’s assets from under $7 million to over $50 million and oversaw the distribution of $50 million in grants, much of it earmarked for programs helping African Americans gain access to higher education. King also spearheaded a number of community programs, including the “Hawthorne Huddle,” a crime-prevention initiative in Minneapolis that has put the tremendous resources of the General Mills Foundation at the disposal of disadvantaged communities since 1997.

“My reasons for leading,” King said in True North, “were not centered on my needs but on the needs of my people, of women, and of my community.” She explained, “The question is, what do people lead toward? I’m leaning toward a cause: to get more opportunities for people. It is in my blood to remove unjust barriers and to help people appreciate themselves and be who they are.”

King has received more than a dozen honorary doctorates from institutions of higher learning, including Empire State College, Marymount Manhattan College, Smith College, and the William-Mitchell College of Law. She has received the Exceptional Black Scientist Award from CIBA-GEIGY Corporation, been named one of Ebony magazine’s Top 50 Black Executives, and received a Lifetime Achievement in Philanthropy Award from the National Center for Black Philanthropy. She was named Twin Citian of 1988 for Minneapolis-St. Paul, Minnesota.

In 1996 King was inducted into the International Adult and Continuing Education Hall of Fame. After accepting that honor, King said, “I know that the individual who pursues continuing education and lifelong learning is continually equipped to overcome social barriers to opportunity…. The best gift any person can give another is the encouragement and actual assistance that the person needs to continue his or her education.”