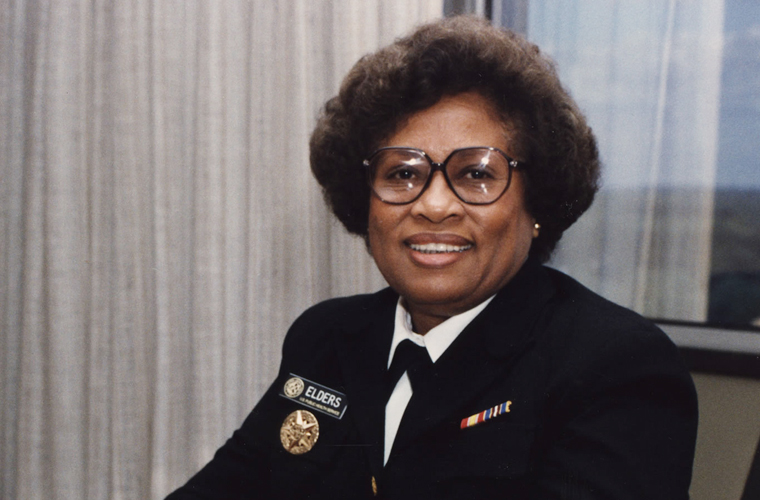 Elders was the first of eight children in a family of sharecroppers. At age 15 she entered Philander Smith College, a historically black liberal arts college in Little Rock, Arkansas, on a scholarship from the United Methodist Church. That year she saw a doctor for the first time in her life and subsequently determined to become a physician herself. In 1952 she graduated from college after only three years. The following year she joined the army; she was trained as a physical therapist in Texas and served at army hospitals in San Francisco and Denver, Colorado. In 1956 she entered the University of Arkansas Medical School in Little Rock on the GI Bill, and in 1960 she was the only woman to graduate from that institution. Also in 1960, she married Oliver Elders. Following an internship in pediatrics at the University of Minnesota Hospital in Minneapolis (1960–61), she returned to Arkansas for a residency at the University of Arkansas Medical Center, where she rose to chief pediatric resident in 1963 and pediatric research fellow in 1964. She earned a degree in biochemistry from the university (M.S., 1967) and joined the faculty at the medical school in 1967, rising to full professor by 1976.

Arkansas Governor Bill Clinton appointed Elders to the office of the director of public health in 1987. In that position she initiated a project to reduce the level of teen pregnancy through availability of birth control, counseling, and sex education at school-based clinics; achieved a 10-fold increase in early childhood screenings from 1988 to 1992 and a 24 percent rise in the immunization rate for two-year-olds; and expanded the availability of HIV testing and counseling services, breast cancer screenings, and around-the-clock care for elderly and terminally ill patients.

On the strength of these achievements, Elders in 1993 was nominated by President Bill Clinton for the post of U.S. surgeon general. Although her confirmation process was lengthy and controversial—involving criticisms of her financial dealings and her outspokenness on sex education—she was eventually confirmed. As chief U.S. medical officer, she played an important role in Clinton’s early efforts to reorganize the health care system, and she regularly urged the public to consider unorthodox solutions to public health problems. Some of her suggestions concerning sex education in the public schools, however, caused great controversy, and in December 1994 Clinton asked her to resign.

In 1995 she returned to the University of Arkansas, teaching and practicing pediatric endocrinology. Following her retirement in 1999, she lectured widely on public health issues. Her autobiography, Joycelyn Elders, MD, written with David Chanoff, was published in 1996.