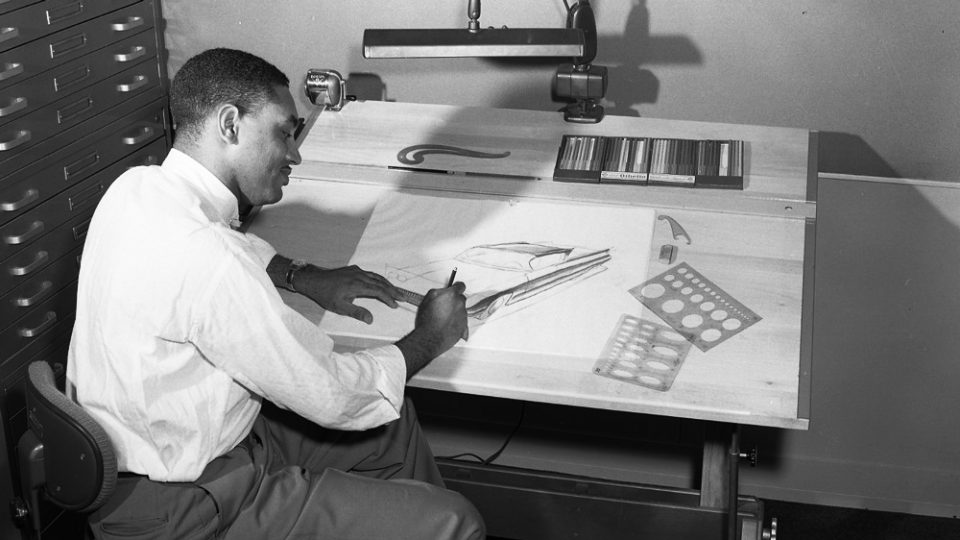 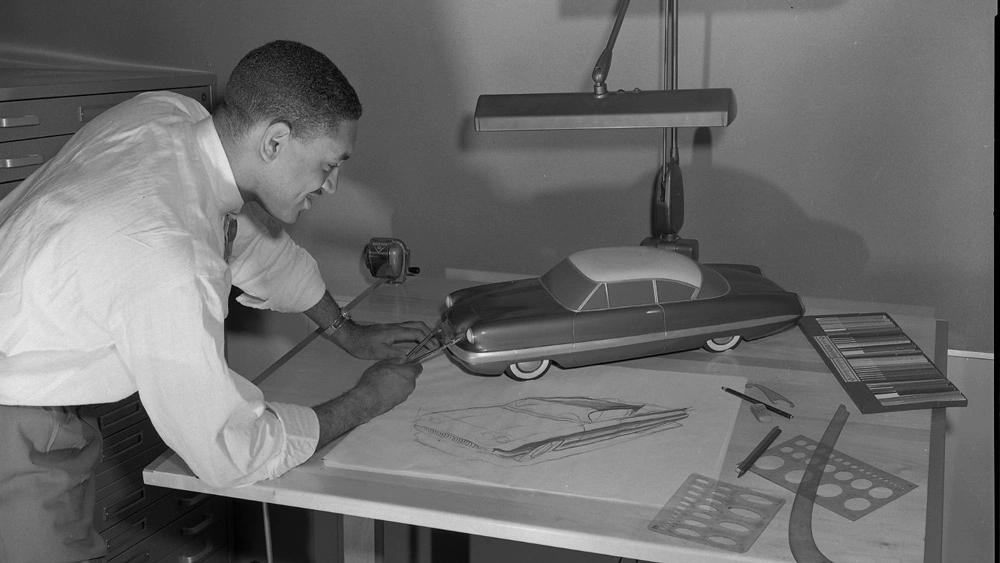 To commemorate Black History Month, Robb Report is publishing a four-part series highlighting Black designers, thinkers, and other creators whose pioneering work has shaped the luxury sector. This is installment two.

In the 1960s, automotive design thrust exuberant sheet metal against a backdrop of social and political turbulence, with star-spangled steeds like Ford’s Bronco, Mustang, Thunderbird, and GT40 searing themselves into the national psyche. Their unmistakable shapes are recognizable to generations of enthusiasts, but few are aware that the man who contributed to these icons was Brooklyn-born designer McKinley Thompson Jr. Even fewer know he is considered to be among the industry’s first Black designers, an outlier in the otherwise homogenous microcosm of Motor City in that era.

Ford designer Christopher Young, also a person of color, likens Thompson’s experience to those of the unsung heroes in the 2016 film Hidden Figures, which profiles the team of Black female mathematicians who were pivotal during NASA’s nascent space program. Their story was unknown to many in the nation until the movie was made, and Thompson’s contributions need more illumination as well. Even Young, who is 48, was not aware of Thompson until relatively recently. “I’m sure he went through a lot,” says Young, “but I’m grateful that he pioneered the way.” 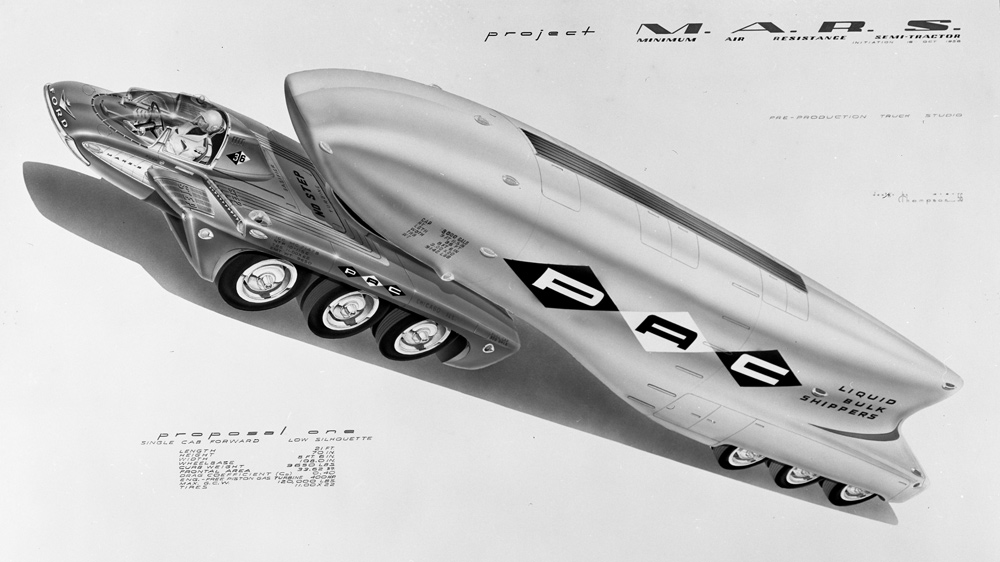 One of McKinley Thompson’s renderings of a futuristic Ford truck concept, circa 1956.

How did an ambitious Black automotive designer rise through the ranks of a largely exclusionary corporate culture? As with many super-achievers, his focus was galvanized early in life. As told to the Henry Ford museum in 2001, Thompson’s vision was forged by an unforgettable moment when, as a 12-year-old boy growing up in Queens, he spotted a 1934 Chrysler DeSoto Airflow at a stoplight. The heavens seemed to part at that moment, literally and figuratively. “There were patchy clouds in the sky, and it just so happened that the clouds opened up for the sunshine to come through . . . I was never so impressed with anything in all my life. I knew that that’s what I wanted to do in life—I want[ed] to be an automobile designer.” 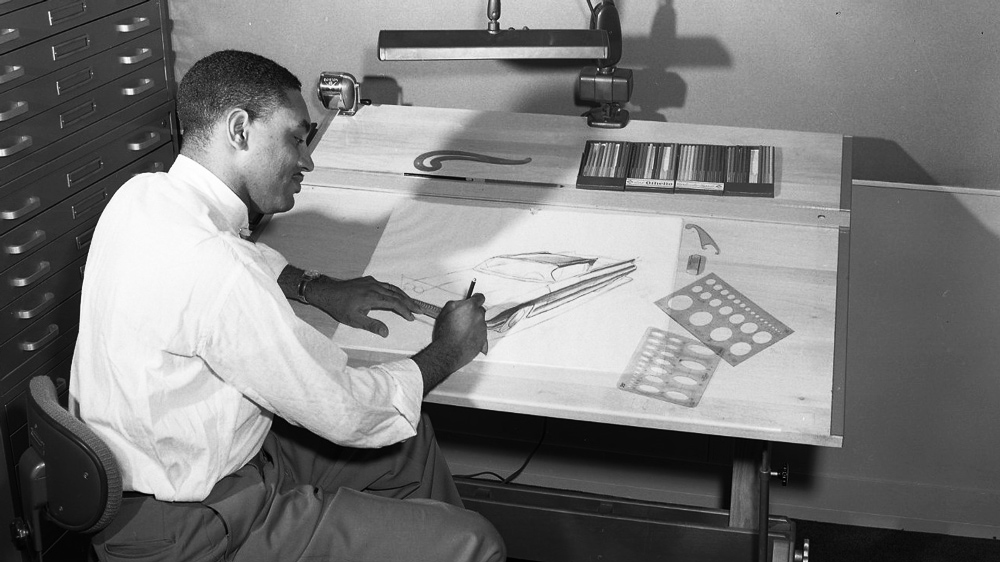 Automotive designer McKinley Thompson at the drawing board for Ford.

Life, however, had other plans—at least initially. Thompson trained as an engineering layout coordinator, serving in the Army Signal Corps in World War II, a division of the military that developed intelligence and communications technologies. The dream of designing cars was still deferred by the time he turned 30 years of age. But the opportunity arose from an unlikely source: a contest sponsored by Motor Trend magazine, which awarded four scholarships to the Art Center College of Design in Pasadena, Calif. Upon becoming the first Black person to graduate from the school’s Transportation Design Department in 1956, the 34-year-old landed his dream job within Ford’s legendary Advanced Design Studio, where early assignments included work on groundbreaking concepts like the Gyron, a fantastically styled, gyroscopically stabilized two-wheeler.

Thompson, known simply as “Mac” to friends and colleagues, had a keen eye for the future, as evident in the design that won him the Art Center scholarship, a turbine car concept that featured a reinforced plastic body. It also surfaced in a sketch of an open-air 4×4 concept, dated July 24, 1963, which eventually became the Ford Bronco. Lauded for its then-audacious configuration, which positioned the wheels at far corners of the vehicle and incorporated a boxy, yet somehow naïve attitude, the Bronco launched a 30-year run that saw over 1.1 million examples sold. Decades later, Young would contribute to the 21st-century rebirth of the rugged off-roader, closing a circle of sorts with Thompson, who passed away in 2006. 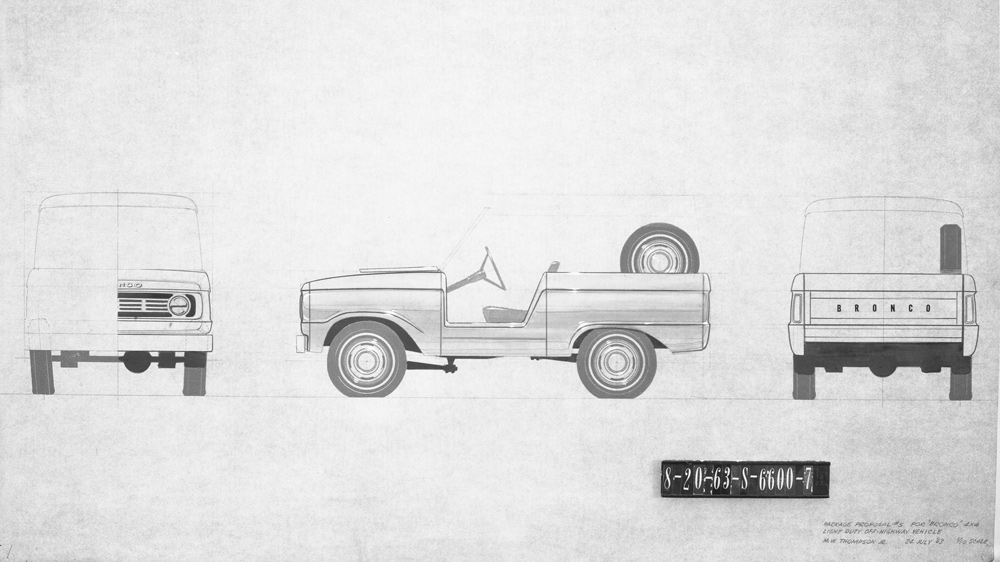 Some of Thompson’s early sketches of the original Ford Bronco, dated July 24, 1963.

While people of color experienced unprecedented challenges in the 1950s and 1960s, launching the Civil Rights Movement which sought to end racial injustice and ban segregation, there was a certain safe haven found in creative circles like the automotive design. Freeman Thomas, a veteran designer responsible for cars including the new VW Beetle, Audi TT, and Dodge Tomahawk concept, likens the ethos of design studios to that of musicians. “When you’re working as a team, it’s like being in a band,” he explains. “Everyone is colorblind and wants the same things. It’s about working together.”

Alex Tremulis, who hired Thompson into Ford’s Advanced Design studio, was the proverbial bandleader with a vision for next-level collaboration. About Tremulis, Thomas notes: “He chose only the most creative designers, and created this incredible environment.” Thomas would know; he led Ford’s Advanced Design studio in Irvine, Calif., and is now CEO of the revitalized Meyers Manx nameplate. 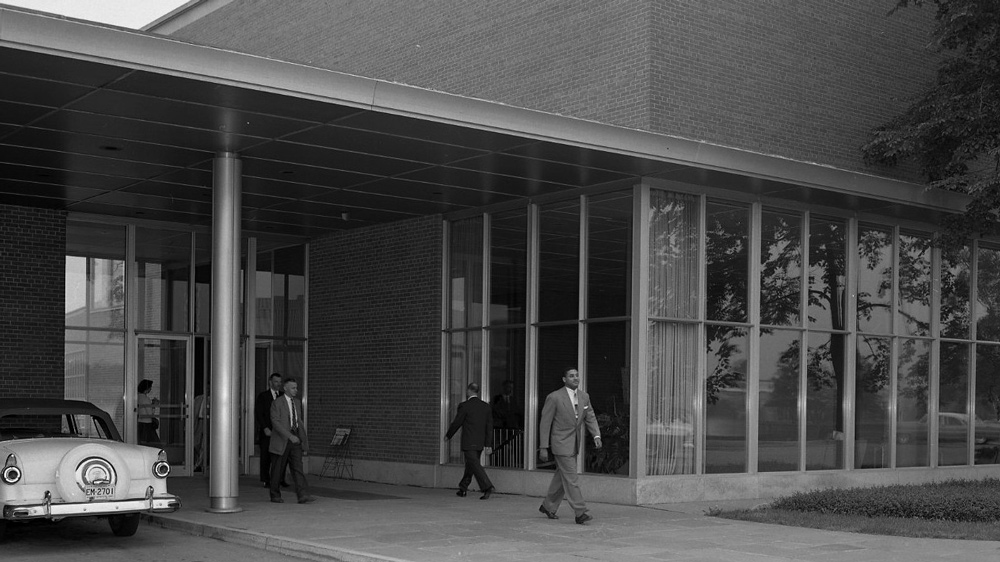 John Clinard, who has worked at Ford since 1972, says, “Automotive enthusiasm transcends race and, particularly in that era, anybody with a great idea was heard.” Reflecting on a period in American history marred by social and political unrest that has resurfaced in recent months can be unsettling. But commonality eclipses differences. Innovators like McKinley Thompson offer powerful reminders that the ties that bind us are stronger than the forces that threaten to tear us apart.