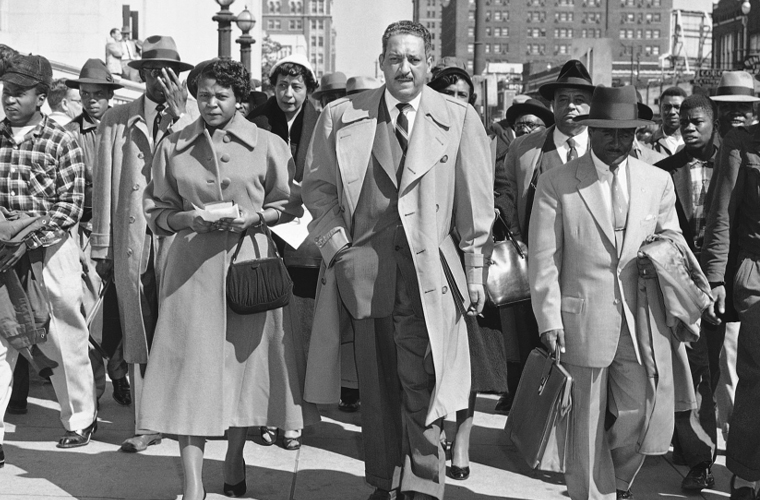 NAACP v. Alabama (357 U.S. 449) was the landmark case in which the U.S. Supreme Court formally recognized the freedom of association as a right protected by the First Amendment. The 1958 decision, a victory for the National Association for the Advancement of Colored People (NAACP), overturned an Alabama court ruling that had restrained the organization from operating in the state and led to its eventual return to Alabama in 1964.

Unlike its guarantees for religion, speech, press, and assembly, the First Amendment does not specifically list freedom of association as a right that cannot be abridged. Social and legal observers have long argued, however, that just as an individual has the right to express his or her own views, so too does that individual have the right to associate with others who share the same opinions. NAACP v. Alabama arose out of a 1956 lawsuit filed against the NAACP by Alabama attorney general John M. Patterson, who claimed that the organization had harmed the citizens of Alabama by promoting, among other things, the Montgomery Bus Boycott and the admission of Autherine Lucy to the University of Alabama. Patterson believed that the resulting negative publicity that accompanied these events in the national media had damaged the state’s reputation.

According to Patterson, the organization’s activities in Alabama were not only troublesome, but they were also illegal because the NAACP had failed to meet the basic qualifications for doing business in the state. Alabama law required that an out-of-state company wishing to do business in Alabama had to file a copy of its corporate charter with state officials, establish a place of business, and designate an agent to act on its behalf. Founded in 1909 in New York, the NAACP opened its first affiliate offices in Alabama in 1918 and established a regional office there in 1951. NAACP officials admitted during a lower federal court proceeding that they had never sought to comply with the qualifying requirement because they thought their organization was exempt given the non-commercial nature of its activities.

The state judge who heard the case ordered the NAACP to immediately cease its operations in the state pending a hearing to determine whether or not it was truly exempt from the requirements of the law. He subsequently ordered the NAACP to produce a number of records relative to its operations in Alabama, including the names and addresses of its members. The NAACP’s initial refusal to turn over any records left the group in contempt of court with a fine of $10,000. The judge offered to reduce or even suspend the fine if the records were relinquished within five days but stated that he would increase the fine to $100,000 if the group did not comply.

The NAACP did, in fact, produce many of the requested records within the five-day period but refused to turn over its membership lists. In doing so, it became subject to not only the higher fine but also to another Alabama law that basically halted all legal proceedings, including the hearing regarding the NAACP’s activities in the state, until the contempt order was discharged. After the Alabama Supreme Court twice refused to review the lower court decision, the U.S. Supreme Court took the case, handing down its ruling on June 30, 1958.

Writing for a unanimous court in NAACP v. Alabama, Justice John Marshall Harlan II declared, “This Court has recognized the vital relationship between freedom to associate and privacy in one’s associations. . . .” He went on to discuss the practical effect of compelling organizations to disclose their membership lists. In the case of the NAACP, according to Harlan, the organization proved that making known its members in the past exposed them to “economic reprisal, loss of employment, the threat of physical coercion, and other manifestations of physical hostility.” With those outcomes expected to recur, the court believed that forcing the NAACP to comply with the state court’s ruling would likely hinder it and its members from organizing and advocating their beliefs.

The court added that compelling the disclosure of the NAACP’s membership might also encourage some individuals to leave the organization and discourage others from joining. In one sense, the court’s ruling, in this case, was very narrow. The ruling technically only overturned the contempt order and the $100,000 fine against the NAACP. Five more years and several more appeals to the Supreme Court were necessary to determine the legality of the NAACP’s operations in Alabama. In a broader sense, however, the freedom of association announced by the court, in this case, became a critical component in the NAACP’s efforts to end racial discrimination in Alabama.