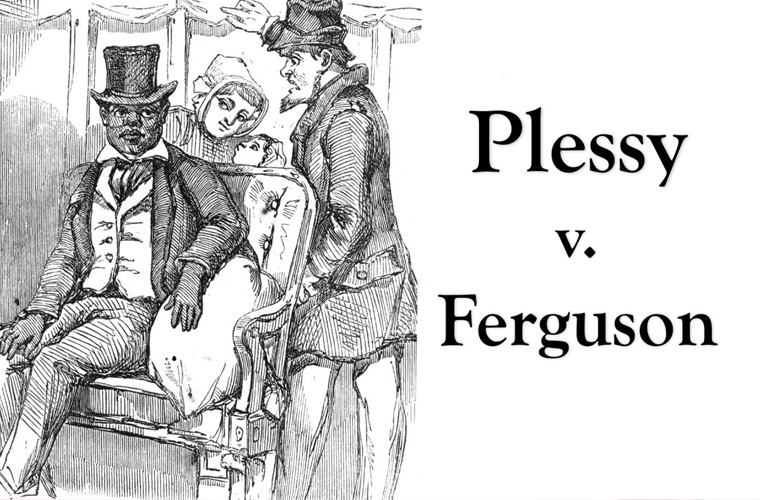 Plessy v. Ferguson was a landmark 1896 U.S. Supreme Court decision that upheld the constitutionality of racial segregation under the “separate but equal” doctrine. The case stemmed from an 1892 incident in which African-American train passenger Homer Plessy refused to sit in a car for blacks. Rejecting Plessy’s argument that his constitutional rights were violated, the Supreme Court ruled that a law that “implies merely a legal distinction” between whites and blacks was not unconstitutional. As a result, restrictive Jim Crow legislation and separate public accommodations based on race became commonplace.

After the Compromise of 1877 led to the withdrawal of federal troops from the South, Democrats consolidated control of state legislatures throughout the region, effectively marking the end of Reconstruction. Southern blacks saw the promise of equality under the law embodied by the 13th Amendment, 14th Amendment, and 15th Amendment to the Constitution receding quickly, and a return to disenfranchisement and other disadvantages, as white supremacy reasserted itself across the South.

As historian C. Vann Woodward pointed out in a 1964 article about Plessy v. Ferguson, white and black Southerners mixed relatively freely until the 1880s, when state legislatures passed the first laws requiring railroads to provide separate cars for “Negro” or “colored” passengers. Florida became the first state to mandate segregated railroad cars in 1887, followed in quick succession by Mississippi, Texas, Louisiana, and other states by the end of the century.

As Southern blacks witnessed with horror the dawn of the Jim Crow era, members of the black community in New Orleans decided to mount a resistance. At the heart of the case that became Plessy v. Ferguson was a law passed in Louisiana in 1890 “providing for separate railway carriages for the white and colored races.” It stipulated that all passenger railways had to provide these separate cars, which should be equal in facilities.

Homer Adolph Plessy, who agreed to be the plaintiff in the case aimed at testing the law’s constitutionality, was of mixed race; he described himself as “seven-eighths Caucasian and one-eighth African blood.” On June 7, 1892, Plessy bought a ticket on a train from New Orleans bound for Covington, Louisiana, and took a vacant seat in a whites-only car. After refusing to leave the car at the conductor’s insistence, he was arrested and jailed.

Convicted by a New Orleans court of violating the 1890 law, Plessy filed a petition against the presiding judge, Hon. John H. Ferguson claimed that the law violated the Equal Protection Clause of the 14th Amendment. Over the next few years, segregation and black disenfranchisement picked up the pace in the South and were more than tolerated by the North. Congress defeated a bill that would have given federal protection to elections in 1892 and nullified a number of Reconstruction laws on the books.

Then, on May 18, 1896, the Supreme Court delivered its verdict in Plessy v. Ferguson. In declaring separate-but-equal facilities constitutional on intrastate railroads, the Court ruled that the protections of the 14th Amendment applied only to political and civil rights (like voting and jury service), not “social rights” (sitting in the railroad car of your choice).

In its ruling, the Court denied that segregated railroad cars for blacks were necessarily inferior. “We consider the underlying fallacy of Plessy’s argument,” Justice Henry Brown wrote, “to consist in the assumption that the enforced separation of the two races stamps the colored race with a badge of inferiority. If this is so, it is not by reason of anything found in the act, but solely because the colored race chooses to put that construction upon it.”

Alone in the minority was Justice John Marshall Harlan, a former slaveholder from Kentucky. Harlan had opposed emancipation and civil rights for freed slaves during the Reconstruction era – but changed his position due to his outrage over the actions of white supremacist groups like the Ku Klux Klan.

Harlan argued in his dissent that segregation ran counter to the constitutional principle of equality under the law: “The arbitrary separation of citizens on the basis of race, while they are on a public highway, is a badge of servitude wholly inconsistent with the civil freedom and the equality before the law established by the Constitution,” he wrote. “It cannot be justified upon any legal grounds.” The Plessy v. Ferguson verdict enshrined the doctrine of “separate but equal” as a constitutional justification for segregation, ensuring the survival of the Jim Crow South for the next half-century.

Intrastate railroads were among many segregated public facilities the verdict sanctioned; others included buses, hotels, theaters, swimming pools, and schools. By the time of the 1899 case Cummings v. Board of Education, even Harlan appeared to agree that segregated public schools did not violate the Constitution. It would not be until the landmark case Brown v. Board of Education in 1954, at the dawn of the civil rights movement, that the majority of the Supreme Court would essentially concur with Harlan’s opinion in Plessy v. Ferguson.

Writing the majority opinion in that 1954 case, Chief Justice Earl Warren wrote that “the doctrine of ‘separate but equal has no place” in public education, calling segregated schools “inherently unequal,” and declaring that the plaintiffs in the Brown case were being “deprived of the equal protection of the laws guaranteed by the 14th Amendment.