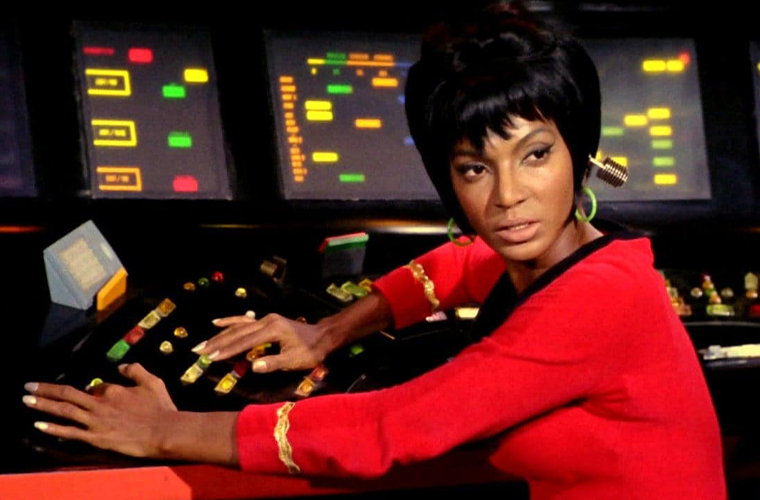 Actress Nichelle Nichols was born on December 28, 1932 in Robbins, Illinois near Chicago. Her father, Samuel Earl Nichols, was a factory worker who also served as the mayor of Robbins and as its chief magistrate. Her mother, Lishia Mae (Parks) Nichols, was a homemaker. As a child, Nichols’ family moved to Chicago where she studied dance at the Chicago Ballet.

During the late 1940s, Nichols was discovered by jazz legend Duke Ellington and toured with both Ellington and Lionel Hampton as a lead singer and dancer. Her acting career began in the film Porgy and Bess (1959); and her first television role was on “The Lieutenant” (1964). Nichols went on to record two albums, including “Down to Earth” (1968), and “Out of This World” (1991).

In 1966, Nichols was cast as Lieutenant Commander Uhura in Star Trek, which marked one of the first times that an African American actress was portrayed a non-stereotypical role on television. Nichols went on to appear as Uhura numerous times in the Star Trek movie and television series, including Star Trek: The Motion Picture (1979), Star Trek II: The Wrath of Khan (1982), Star Trek III: The Search for Spock (1984), Star Trek IV: The Voyage Home (1986), , Star Trek V: The Final Frontier, Paramount (1989), Star Trek VI: The Undiscovered Country (1991). She was also cast as Ruana in two Tarzan films: Tarzan’s Jungle Rebellion (1967) and Tarzan’s Deadly Silence (1970).

In 1975, Nichols established Women in Motion, Inc., a company that produced educational materials using music as a teaching tool and was expanded to become an astronaut recruitment tool after Nichols won a grant from the National Aeronautics and Space Administration (NASA). This resulted in thousands of women and minorities applying to NASA’s space program, such as Sally Ride, Judith Resnik, Ronald McNair, and Ellison Onizuka. In addition to her autobiography Beyond Uhura: Star Trek and Other Memories (1994), Nichols is co-author of Saturn’s Child (1995), and a contributor to publications of the National Space Institute.

In October of 1984, Nichols was presented with NASA’s Public Service Award for her many efforts towards integrating the U.S. space program. She was honored with a star on the Hollywood Walk of Fame in 1992, and became the first African American actress to place her hand prints in front of Hollywood’s Grauman’s Chinese Theater, along with the rest of the Star Trek cast. Nichols was elected as an honorary member of Alpha Kappa Alpha Sorority, Inc.; and, on June 8, 2010, she received an Honorary Doctorate Degree from Los Angeles Mission College. Nichelle Nichols died on July 30, 2022