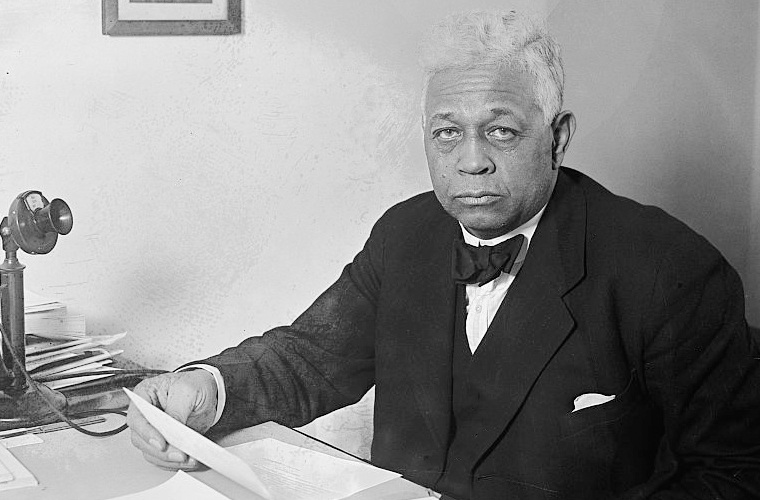 A child of the early post-reconstruction south, Oscar DePriest was born in Florence, Alabama on March 9, 1871. In 1878 his family moved to Salina, Kansas. Sometime in the late 1880s, DePriest moved to Chicago, Illinois where he found work as a house painter and decorator. DePriest created his own contracting business and became active in local civic affairs. DePriest’s organizational skills and his affable and engaging personality caught the eye of Republican Party leaders who eventually nominated him for Cook County commissioner in 1904. He won the election and served two terms in this position.

While in office DePriest worked as a real estate broker and amassed considerable wealth by moving black families into previously all-white neighborhoods, a practice is later known as blockbusting. He also continued to rise in Republican Party politics and in 1915 he became Chicago’s first black alderman.

DePriest soon became known as an avid defender of black civil rights and a progressive on labor issues. He also developed a reputation as a corrupt politician. In 1917 he was indicted for bribery and accused of protecting South Side gamblers. DePriest, however, was acquitted at his trial. For the next decade, he would continue to run for public office with varying degrees of success. Finally, in 1928 DePriest was elected to represent the First Congressional District of Illinois. He became the first African American Congressman since North Carolina’s George H. White left Washington, D.C. in 1901 and the first black congressman ever elected outside the South. As the sole early 20th Century black Congressman, DePriest soon became a political symbol for much of African America.

DePriest was as popular among African Americans for his high-profile challenges of racial practices as for his legislation. He once told an Alabama Senator that he was “not big enough to prevent” DePriest from dining in the Senate restaurant. On another occasion he defended the right of Howard University students to eat in the House restaurant, eventually taking the cause to the floor of the House. He also became involved in a public controversy with Republican President Herbert Hoover when First Lady Louann Hoover refused to invite DePriest’s wife, Jessie Williams DePriest, to the White House to have tea with the spouses of other Republican Congressmen. After DePriest publicized the snub, Mrs. Hoover invited Mrs. DePriest to the White House in a highly symbolic event that marked the first time an African American woman had ever been entertained by a First Lady in the official residence of the President.

Although DePriest prided himself as a social liberal and fiscal conservative, his latter views seemed increasingly out of step with the needs of the Depression-ravaged South Side district he represented. DePriest managed to hold on to his seat in the Franklin D. Roosevelt landslide in 1932 but in 1934 he lost the election to Democrat Arthur Mitchell in a contest that signaled both the popularity of the New Deal Programs in Chicago and the movement of African Americans from the Republican to Democratic Party. DePriest returned full-time to his real estate business. He staged a brief political comeback when he served as a Chicago alderman between 1943 and 1947. Oscar DePriest died in Chicago on May 12, 1951.