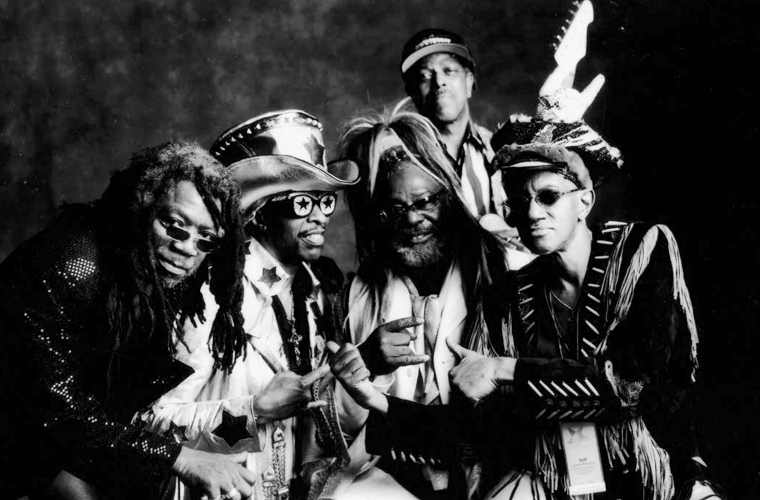 The band combined the hard rock of Jimi Hendrix, the funky rhythms of James Brown, and the showstopping style of Sly and the Family Stone to fashion an outrageous tribal funk experience. P-Funk emphasized the aesthetics of funk as a means of self-fulfillment; to “give up the funk” meant to achieve transcendence.

Organized and produced by Clinton, the original Parliaments began as a doo-wop quintet based in Plainfield. The group’s first charting single, “(I Wanna) Testify,” in 1967 led to their first tour, but legal problems that arose with the demise of their record company resulted in the loss of the group’s name. Performing throughout the northeastern United States and recording in Detroit, the group began to emphasize its backing band, Funkadelic. Led by bassist Nelson, guitarist Hazel, drummer Fulwood, and classically trained keyboardist Worrell, Funkadelic incorporated the influence of amplified, psychedelic rock into its distinctive sound.

By 1970 Clinton was producing albums for both the renamed Parliament and Funkadelic—essentially the same entity recording for different labels. In the process, he recruited key new performers: Collins on bass, Wesley on trombone, and Parker on saxophone (all from James Brown’s band the JBs), along with drummer Brailey, vocalist Cooper, lead guitarist Hampton, and vocalist-guitarists Shider and Goins. Success came in 1976 with the release of Parliament’s album Mothership Connection and the single “Give Up the Funk (Tear the Roof Off the Sucker),” which earned a gold record. Other hit singles followed, including “Flash Light” (1977) by Parliament, “One Nation Under a Groove” (1978) by Funkadelic, and “Atomic Dog” (1982) by Clinton.

P-Funk reached its peak in the late 1970s, sporting a massive stage act (with more than 40 performers) that showcased Clinton’s visionary album concepts, Collins’s spectacular bass effects, and Worrell’s synthesizer innovations. However, by the early 1980s, the large overhead and multifaceted legal identity of the group led to a collapse of the enterprise.

P-Funk defined the dance music of its time and influenced a range of styles from hard rock to house music. The P-Funk catalog is among the most sampled by rap music producers. Parliament-Funkadelic was inducted into the Rock and Roll Hall of Fame in 1997.