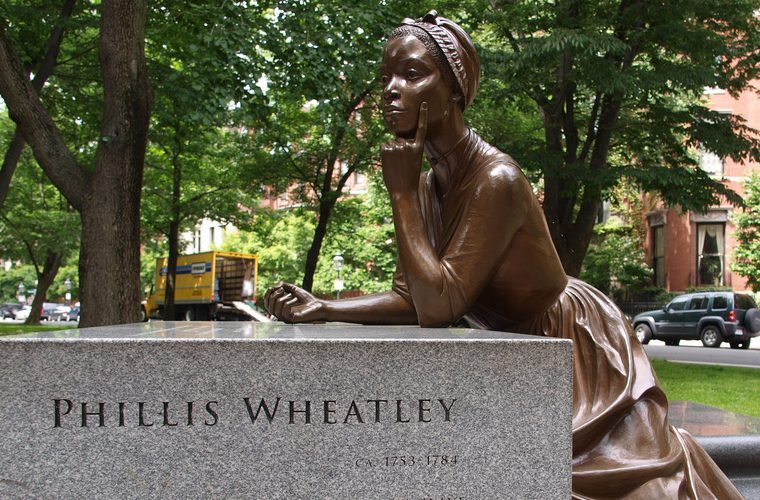 A slave for much of her life, poet Phillis Wheatley (1753? – 1784) was the first published black American author and the second published American woman author.  Several women nourished her career, including her owners/mistresses Susanna and Mary Wheatley, her friend Obour Tanner, and in England the writer Selina Hastings, Countess of Huntingdon,

At a young age, Phillis was stolen from Africa by slave-traders and brought to Massachusetts.  In 1761 she was purchased in Boston by tailor John Wheatley, with his wife Susannah, and 18-year old twins Mary and Nathaniel.  Susannah named Phillis after the slave ship on which she had been transported and estimated her age at about seven because she was losing her baby teeth. In a later poem, Phillis identified the Gambia as the land of her birth.

Because of their Puritan religion, the Wheatleys—and many other slave owners in New England—regarded slaves as part of the family, and allowed them to read, write and learn trades.  After witnessing Phillis writing on the walls, Mary began to tutor her. Within a year and a half, Phillis could read the Bible, and she completely mastered English in four years.  She then moved on to Latin, translating and embellishing a tale from Ovid’s Metamorphoses, which was eventually published.  At age fourteen Phillis wrote her first poem, To the University of Cambridge.

Because of her writing talent and her poor health, the Wheatleys assigned Phillis light household duties and encouraged her poetry.  She gained attention in Boston and England literary circles with her first published poem On the Death of the Rev. Mr. George Whitefield (1770).  Although slaves were not usually baptized in the church, on August 18, 1771, she was baptized at Old South Meeting House, a church which likely encouraged her revolutionary politics.  Phillis also likely participated in a singing school operated by William Billings, America’s first full-time composer-choirmaster.

Wheatley’s writing was greatly influenced by religious teachings, personal experiences and historical events.  Many of her poems were written on the occasion of births and deaths.  Some biographers point to her use of natural imagery, in such poems as On Imagination, as a reference to her African heritage.  Although she made subtle protests against slavery in her poetry (such as On Being Brought from Africa to America), Phillis’s most powerful objections to bondage appeared in her letters.  In a 1774 letter, she wrote: “in every human Breast, God has implanted a Principle, which we call Love of Freedom; it is impatient of Oppression, and pants for Deliverance.”

In 1772 Boston printing companies refused to publish Phillis’s first book of poetry because of her race and her patriotic politics.  John Wheatley sent the manuscript to the London bookseller Archibald Bell, who showed to the Countess of Huntingdon, Selina Hastings.  At the same time, the Wheatleys’ family physician recommended that Phillis remedy her poor health by accompanying Nathaniel on a sea voyage to England.  Upon meeting Phillis, Bell and Hastings published Poems on Various Subjects, Religious and Moral (1773), making Phillis a literary celebrity in London.

Shortly after Phillis returned to Massachusetts, her mistress Susannah died on March 3, 1774. Phillis grieved greatly, writing to a friend, “let us imagine the loss of a parent, sister, or brother, the tenderness of all these were united in her.”  John Wheatley set Phillis free at this time.

In late 1775 on a visit to her black woman friend Obour Tanner in Rhode Island, Phillis wrote a poem about George Washington and sent it to him. Upon his request, she met with him in Cambridge.  During this time Phillis also met fellow patriot Benjamin Franklin, over the objections of staunch loyalists John and Nathaniel Wheatley.

In March 1778 John Wheatley died at the age of 72.  One month later Phillis married John Peters, a Boston grocer and free black that had been a merchant, lawyer, and physician. However, Peters disdained any work beneath his self-perceived dignity and soon drove the family into poverty.  After being unable to publish a second book because of racism and the disruption of the revolution, Phillis began doing heavy work at a boarding house.  She had already lost two children to serious illness.  On December 5, 1784, Phillis died in Boston at the age of 31.  Her third child died shortly thereafter, and both were buried at an unknown location.

At the time of her death, Phillis Wheatley was collecting another volume of poems to be dedicated to Benjamin Franklin. However, the manuscript was borrowed and John Peters was unable to recover it.