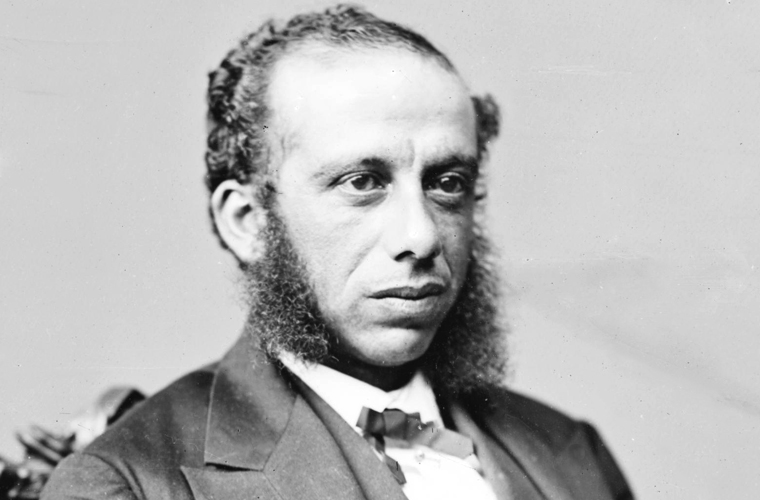 A wealthy resident of Charleston, South Carolina, Robert De Large won election to the U.S. House of Representatives as an ally of the scandal-ridden administration of Republican Governor Robert Scott. Though he maintained a personal political alliance with Scott, De Large was constantly at odds with the state Republican Party and rarely defended the corrupt state government. “I am free to admit,” De Large noted on the House Floor while advocating for victims of racial violence in the South, “that neither the Republicans of my State nor the Democrats of that State can shake their garments and say that they had no hand in bringing about this condition of affairs.” A protracted contested election, in which De Large’s lack of political capital, prickly personality, and failing health conspired against him, cut short the young politician’s career.

Robert Carlos De Large was born on March 15, 1842, in Aiken, South Carolina. Although some records indicate De Large was born a slave, he likely was the offspring of free mulatto parents. De Large’s father was a tailor, and his Haitian mother was a cloak maker. The De Large family owned slaves and, as members of the free mulatto elite, were afforded opportunities denied their darker–skinned neighbors. Robert De Large was educated at a North Carolina primary school and attended Wood High School in Charleston, South Carolina. He later married and had a daughter, Victoria. De Large was a tailor and a farmer before gaining lucrative employment with the Confederate Navy during the Civil War. Perhaps regretting the source of his financial windfall, De Large later donated most of his wartime earnings to the Republican Party. Nevertheless, by 1870 he had amassed a fortune that exceeded $6,500. He moved within Charleston’s highest circles and joined the Brown Fellowship Society, an exclusive organization for mullatos.

After the war, De Large worked for the Republican state government as an agent in the Freedmen’s Bureau. He became an organizer for the South Carolina Republican Party, serving on important committees at several state conventions. He chaired the credentials committee at the 1865 Colored People’s Convention at Charleston’s Zion Church. At the 1867 South Carolina Republican Convention, he chaired the platform committee, and he served on the committee on franchise and elections at the state’s 1868 constitutional convention. Among African–American politicians of the era, De Large was comparatively conservative. He advocated mandatory literacy testing for voters but opposed compulsory education while supporting state-funded and integrated schools. He did favor some more radical measures, however, arguing that the government should penalize ex-Confederates by retaining their property and disfranchising them. In 1868, De Large won his first elected office, serving in the state house of representatives where he chaired the ways and means committee. He also served on a board for the mentally ill and was a member of the state sinking fund commission. In 1870, seeking a black appointee, the legislature chose De Large as land commissioner. In his quest to help South Carolina’s poor, De Large oversaw the sale and transfer of almost 2,000 small tracts of land to be paid for over a maximum of eight years, but his tenure on the land commission was discredited by allegations of fraud. Political opponents suspected that De Large skimmed money from the commission to help finance his congressional campaign, but he was never charged with a crime.

In 1870, De Large set his sights on a congressional district representing Charleston and the southeastern portion of the state. He secured the Republican nomination over incumbent scalawag Christopher Bowen, a former Confederate soldier and one of Governor Scott’s most formidable political enemies. According to a leading historian, De Large maintained a personal friendship with the embattled governor, although he was often at odds with Scott’s supporters. De Large refused to defend white South Carolina Republicans against charges of corruption and often publicly chided those connected with Scott’s administration for their unscrupulous activities. Yet Scott continued to support De Large throughout his political career, primarily because of their friendship.

Christopher Bowen challenged De Large in the 1870 general election, running as an Independent Republican. Having lost favor with the black majority (68 percent of the district’s population) due to the influence of Bowen’s allies, De Large was ahead by only a slender margin (fewer than 1,000 votes out of more than 32,000 cast) despite considerable political and financial support from Governor Scott. Bowen challenged the election results, but De Large was sworn into the 42nd Congress (1871–1873) when it convened on March 4, 1871, and assigned to the Committee on Manufactures.

De Large’s legislative agenda as a freshman Member lacked continuity, principally because of the large workload created by Bowen’s challenge. Early in his term, De Large unsuccessfully offered an amendment to provide $20,000 to rebuild a Charleston orphanage. He also supported a bill providing amnesty to former Confederates but felt loyal black and white southerners should be protected from intimidation and terror. Arguing in favor of a bill to curb the activities of the Ku Klux Klan in April 1871, De Large referred to intolerable conditions throughout the South that required action from Congress. “The naked facts stare us in the face, that this condition of affairs does exist, and that it is necessary for the strong arm of the law to interpose and protect the people in their lives, liberty, and property,” he noted. However, De Large was emphatic that his Charleston district had no reported cases of “outlawry” but admitted that “until within the last few months no one upon the face of God’s earth could have convinced me that a secret organization existed in my State for the purpose of committing murder, arson, and other outrages.”

De Large’s unvarnished comments on the House Floor about local party corruption caused him to run afoul of state Republicans. Responding to a speech by Democrat Samuel Cox of New York—in which Cox accused black politicians of fueling the corruption in South Carolina’s government—De Large insisted that black South Carolina politicians were guilty only of trusting corrupt white Republicans. “While there may have been extravagance and corruption resulting from the placing of improper men in official positions,” De Large declared, “these evils have been brought about by the men identified with the race to which the gentleman from New York belongs, and not by our race.” Republicans outside South Carolina praised De Large’s speech—the Chicago Tribune said it showed “fearlessness and frankness”—but white political leaders inside South Carolina were infuriated by De Large’s accusations. White party leadership suspected he was trying to create a political party that would alienate blacks from the Republican Party. De Large had reportedly told a Charleston crowd, “I hold that my race has always been Republican for necessity only,” during his 1870 election campaign. Though he denied rumors he planned to change parties, De Large’s alliance with black nationalist Martin R. Delany, who had abandoned the Republican Party, fueled such speculation.

De Large participated sparingly in House Floor debate during the second session, as he was occupied defending his seat. The House Committee on Elections began consideration of Christopher Bowen’s challenge to his election in December 1871, and De Large took a leave of absence in April 1872 to prepare his defense.

Bowen’s sensationalized bigamy trial—his political enemies accused him of marrying a third wife without having legally separated from his first and second wives—focused national attention on the case and damaged Bowen’s chances of successfully contesting De Large’s election. Nevertheless, Bowen accused De Large supporters of stuffing ballot boxes with false votes and was backed by white South Carolina Republicans. The Chicago Tribune observed wryly, “It really seems that the only way a South Carolina politician can keep out of State Prison or in Congress is by proving all the rest to be bigger scoundrels than himself.” Despite Bowen’s political problems, De Large had few political allies. He had developed a less–than–favorable reputation with his stubborn, elitist, and temperamental antics, including a fistfight in front of the state assembly in 1869. Even fellow black lawmakers offered stinging judgments. South Carolina Representative Robert Elliott derided De Large for his small stature and outsized ego, calling him a “pygmy who is trying to play the part of a giant.”Left to mount his own defense, De Large accused Bowen of bribing a lawyer to keep exonerating evidence from the Committee on Elections. The case was further complicated when De Large’s health failed in the summer of 1872. Black South Carolina Representative Joseph Rainey pleaded on the House Floor for a delay in the case, but the committee reported that the many abuses and irregularities during the election made determining a victory impossible, and on January 24, 1873, declared the seat vacant for the rest of the 42nd Congress, set to adjourn in March. The full House agreed with the committee’s findings.

The rigors of defending his seat in the 42nd Congress took a toll on De Large’s fragile health and left him few options other than retirement. Black politician Alonzo Ransier won his seat. De Large returned to the state capital in Columbia and later moved to Charleston after Governor Scott appointed him magistrate of that city. He died of tuberculosis shortly thereafter on February 14, 1874, at the age of 31. Despite De Large’s difficult relationship with South Carolina Republicans, city magistrates statewide closed their offices on the day of his funeral to show their respect.