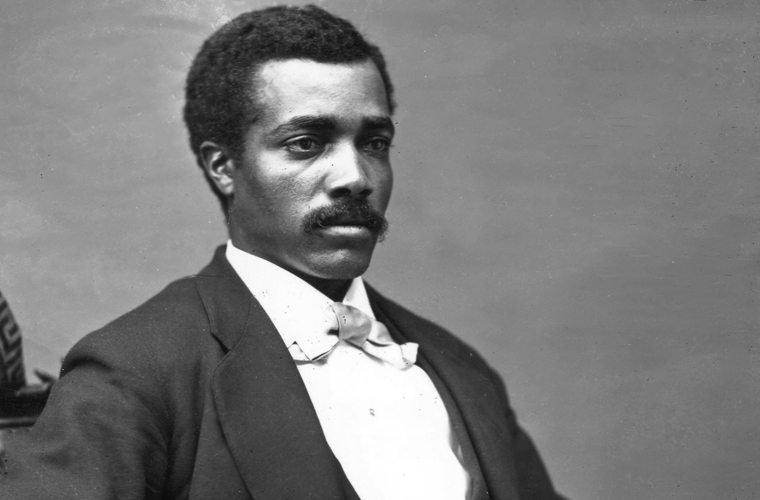 Josiah Thomas Walls was born into slavery in Winchester, Virginia, on December 30, 1842. He was suspected to be the son of his master, Dr. John Walls, and maintained contact with him throughout his life. When the Civil War broke out, Walls was forced to be the private servant of a Confederate artilleryman until he was captured by Union soldiers in May 1862. Emancipated by his Union captors, Walls briefly attended the county normal school in Harrisburg, Pennsylvania. By July 1863, Josiah Walls was serving in the Union Army as part of the 3rd Infantry Regiment of United States Colored Troops (USCT) based in Philadelphia. His regiment moved to Union-occupied northern Florida in February 1864. The following June, he transferred to the 35th Regiment USCT, where he served as the first sergeant and artillery instructor. While living in Picolota, Florida, Walls met and married Helen Fergueson, with whom he had one daughter, Nellie. He was discharged in October 1865 but decided to stay in Florida, working at a sawmill on the Suwannee River and, later, as a teacher with the Freedmen’s Bureau in Gainesville. By 1868, Walls had saved enough money to buy a 60–acre farm outside the city.

One of the few educated black men in Reconstruction–Era Florida, Walls was drawn to political opportunities available after the war. He began his career by representing north–central Florida’s Alachua County in the 1868 Florida constitutional convention. That same year, Walls ran a successful campaign for state assemblyman. The following fall, he was elected to the state Senate and took his seat as one of five freedmen in the 24–man chamber in January 1869. Josiah Walls attended the Southern States Convention of Colored Men in 1871 in Columbia, South Carolina.

After gaining traction in 1867, the Florida Republican Party disintegrated into factions controlled by scalawags and carpetbaggers—each group fighting for the loyalty of a large constituency of freedmen. The disorganized GOP faced another grim situation when their nominating convention met in August 1870. The three previous years would be remembered as the apex of anti-black violence in the state, orchestrated by the well–organized Jacksonville branches of the Ku Klux Klan. In the face of such unrestrained intimidation, Florida freedmen were widely expected to avoid the polls on Election Day. Fearing conservative Democrats would capture the election in the absence of the black vote, state GOP party leaders—a group made up entirely of white men from the scalawag and carpetbagger factions—agreed that nominating a black man to the state’s lone At-Large seat in the U.S. House of Representatives would renew black voters’ courage and faith in the Republican Party. Passing over the incumbent, former Union soldier Representative Charles Hamilton, the state convention delegates advanced the names of their favorite black candidates. Fierce competition between the nominees led to unruly debate as well as attempts to cast fraudulent votes, and almost resulted in rioting. Walls’ reputation as an independent politician who would not fall under the control of a single faction gave him the edge, and the convention selected him for the party’s nomination on the 11th ballot. The narrow victory was not encouraging for Walls. In the general election, he would confront not only Democratic opposition but also the doubts of his own party.

Walls faced former slave owner and Confederate veteran Silas L. Niblack in the general election. Niblack immediately attacked Walls’s capabilities, arguing that a former slave was not educated enough to serve in Congress. Walls countered these charges by challenging his opponent to debate and speaking at political rallies throughout northern Florida (the most populous section of the state). The campaign was violent; a would-be assassin’s bullet missed Walls by inches at a Gainesville rally, and Election Day was tumultuous. As one Clay County observer noted, Florida had been “turned upside down with politics and the election.” Walls emerged victorious, taking just 627 more votes than Niblack out of the more than 24,000 cast. After presenting his credentials on March 4, 1871, he was immediately sworn into the 42nd Congress (1871–1873) and given a seat on the Committee on the Militia.

Niblack quickly contested the election. He provided solid evidence that the canvassers who rejected Democratic ballots in at least eight counties throughout the state were not legally allowed to do so; their job had been limited to counting votes. Walls claimed that he had lost more votes due to voter intimidation by the Ku Klux Klan in several northeastern counties, but he had little tangible evidence to support this claim.8 Walls was in office for nearly two years before the House Committee on Elections ruled on his case. The Republican majority declared Niblack the winner on January 29, 1873—a rare case in which the committee decided with the candidate from the minority party. Despite his loss, Walls’s congressional career was not over. In November 1872, he had won one of the two Florida At-Large seats in the 43rd Congress (1873–1875). In the four-way race, the top–two vote-getters won a seat. Walls was just 34 votes shy of carpetbagger Republican William Purman. Niblack, running as a Conservative, was third. Walls returned to Congress when it convened in December 1873, receiving an additional assignment: to the Committee on Expenditures in the Navy Department.

Walls spent much of the 42nd and 43rd Congresses advancing the political and economic interests of his Florida constituents. Even Jacksonville’s Democratic Florida Union praised Walls’s efforts on behalf of the state, declaring, “Mr. Walls adds his mite to what has gone before and does it well.” He affectionately referred to Florida as “my own sunny state,” in an attempt to promote the potential of his new home for tourism and farming. Walls presented resolutions for statewide internal improvements including the construction of telegraph lines, customhouses, courthouses, and post offices. He sought funding to improve Florida’s harbors and rivers and to create land-grant state agricultural college. In an 1872 tariff bill, Walls also fought to protect Florida’s orchards from foreign competition. Most of Walls’s measures failed to make it out of committee, but he had more success passing private bills (those submitted for the benefit of an individual). He managed to gain pensions for Seminole War veterans who fought several battles against Native Americans in Florida throughout the early 19th century.

Walls feared the cause of public education would languish if it were left to the states. During the 43rd Congress, he enthusiastically supported a measure to establish a national education fund financed by the sale of public land. Walls addressed this issue in his first major floor speech on February 3, 1872: “I believe that the national Government is the guardian of the liberties of all its subjects,” Walls said. “Can [African Americans] protect their liberties without education; and can they be educated under the present condition of society in the States where they were when freed? Can this be done without the aid, assistance, and supervision of the General Government? No, sir, it cannot.” The bill passed with amendments protecting a state’s right to segregated education and granting states greater control over the distribution of federal funds, but the money was never appropriated. Walls’ support for education was further frustrated when the Civil Rights Bill—a battered piece of legislation seeking to eliminate discrimination in public accommodations, first introduced in 1870—came to a vote in February 1875. Opponents managed to excise a clause calling for equal educational opportunities just before the measure came to a vote. Walls was so displeased, he abstained from voting on the final bill on February 5, 1875. Submitting a speech to the Congressional Record Appendix just one month after the civil rights vote, Walls assessed the future of the South as Reconstruction began to deteriorate: “I reluctantly confess, after so many years of concessions that unless partisan and sectional feeling shall lose more of its rancor in the future than has been experienced in the past, fundamental law will be disregarded, overthrown, and trampled under foot, and a complete reign of terror and anarchy will rule supreme.”

For the 1874 campaign, Florida was split into two congressional districts, and Walls ran in a district covering the eastern half of the peninsula. Nearly the entire population of the new district, which was more than half black, lived between Walls’s home in the north-central Florida and Jacksonville, on the Atlantic Coast. The state Republican Party remained fractured, and an economic depression further endangered its grip on the state government. Walls returned to Florida after the 43rd Congress to maximize his personal wealth and to muster local political strength for the coming election. He succeeded in both goals. Using his congressional salary, Walls purchased a cotton plantation formerly owned by Confederates. That same year, he was admitted to the Florida bar (legal training was not required in some rural states) and bought the Gainesville New Era newspaper. Walls used the New Era to campaign for his renomination. In his first editorial, Walls promised to focus on internal improvements and to address the “wants and interests of the people of color,” loosely defined as education, thrift, and industry. His local popularity soared, and district Republicans nominated him on the first ballot in August 1874.

In the general election, Walls faced Conservative candidate Jesse J. Finley, a Tennessee native and pre–Civil War member of the Whig Party. Voters divided almost entirely along racial lines; Walls topped Finley by a slim margin of 371 votes out of nearly 17,000 cast, taking 51 percent. He was sworn into the 44th Congress and assigned to the Committee on Mileage.

Once again Walls was confronted by a challenge to his seat. Finley contested the election, claiming that ballots from several precincts where Walls resided in Alachua County had been miscounted. Finley supporters also claimed that other Alachua County votes were illegal because the eligibility oath was executed improperly (Florida law required this oath from voters whose names did not appear on the precinct’s list). Finley also accused Walls’s black political ally W. U. Saunders of impersonating a federal marshal at one of the polling places to protect and encourage black voters. Furthermore, Finley supporters suspected Walls’s votes in one Columbia County precinct had been tampered with by GOP state senate candidate E. G. Johnson. With Democrats now in power in the House, the Committee on Elections reported 8 to 3 against Walls. As the debate moved to the House Floor, Democratic Speaker Michael Kerr of Indiana allocated time to Members during the two–day discussion. Not one of Walls’s six black colleagues was allowed to speak, although Walls briefly took the floor in his own defense. On April 19, 1876, the House adopted the committee report, 135 to 84, with 71 abstentions (including Representatives Robert Smalls of South Carolina and Charles Nash of Louisiana). Walls returned to Florida a week later and, in August 1876, Republican Horatio Bisbee defeated his attempt at renomination.

In November 1876, Walls won a seat in the Florida state senate, where he championed his cause of compulsory public education. Ultimately frustrated by the futility of Republican politics after the collapse of Reconstruction, he took a permanent leave of absence in February 1879. The opportunity to face his old foe Bisbee for the Republican nomination to a Florida U.S. House seat lured him back into politics in 1884. He lost and then ran unsuccessfully in the general election as an Independent candidate. In 1890, Walls lost another bid for the state senate. In 1885, his wife, Helen Fergueson Walls, died and Josiah Walls married her young cousin, Ella Angeline Gass. His successful farm was destroyed when his crops froze in February 1895. Walls subsequently took charge of the farm at Florida Normal College (now Florida A&M University), until his death in Tallahassee on May 15, 1905. Josiah Walls had fallen into such obscurity, no Florida newspaper published his obituary.