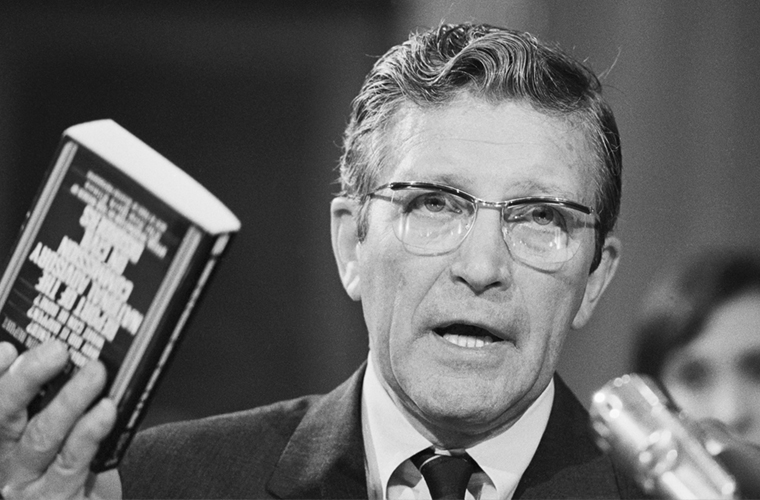 In 1967 amidst a surge of riots in American cities, President Lyndon B. Johnson organized a commission chaired by Illinois Governor Otto Kerner, Jr. to assess the sources of the violence. The Kerner Commission returned a 426-page report that raised basic questions about race relations in the United States.

What Was the Kerner Commission?
The Kerner Commission, the informal name of the National Advisory Commission on Civil Disorders, was a presidential select committee organized by President Lyndon B. Johnson. It was tasked with investigating uprisings in American inner cities that peaked in the summer of 1967. Led by Governor Otto Kerner, Jr. of Illinois, the commission produced what became known as the Kerner Report.

The Commission reported that despite the recent passage of the 1964 Civil Rights Act, Black Americans remained stymied by the same mechanisms of white racism that had dogged them for centuries. The Commission held that structural racism in the form of segregation, acceptance of inadequate housing, excuse-making for police brutality, and tacit approval of racial inequality had pushed many Black Americans to a breaking point.

6 Findings of the Kerner Commission Report
When organizing the National Advisory Commission on Civil Disorders, President Lyndon Johnson raised three key questions for the commissioners to tackle: “What happened? Why did it happen? What can be done to prevent it from happening again and again?” When the final report reached President Johnson’s desk on February 29, 1968, it offered several observations:

1. America was saddled with dire inequality. The Kerner Report did not mince words when it declared, “Our nation is moving toward two societies, one black, one white—separate and unequal.”

2. White racism remained a dominant force in America. Despite the relative liberalism of the 1960s marked by the passage of the Civil Rights Act and Voting Rights Act, the same racist forces that had sullied prior eras of American history remained strong. As the Commission summarized, “White racism is essentially responsible for the explosive mixture which has been accumulating in our cities since the end of World War II.”

3. The media had largely ignored the perspectives of non-white Americans. The Commission reported, “The press has too long basked in a white world looking out of it, if at all, with white men’s eyes and white perspective.”

4. Law enforcement operated with brutality. Racist police practices had pushed Black communities to a breaking point, with some turning to riot. Although sympathetic toward police officers, the Kerner Report stated that many Black people “believe that police brutality and harassment occur repeatedly” and noted that “no real sanctions are imposed on offending officers.”

5. Many changes should be implemented on a federal, state, and local level. The Kerner Commission urged decisive action to prevent further unrest. It pressed for mass construction projects to address inadequate housing conditions. It urged hiring more racially diverse police officers. It called for more aid initiatives to help people in poverty. On the whole, it challenged the country to end the de facto segregation that remained the norm at the time.

6. All Americans faced the consequences of inaction. As a summarizing warning, the Commission reported, “In the summer of 1967, we have seen in our cities a chain reaction of racial violence. If we are heedless, none of us shall escape the cons

The aftermath of the Kerner Commission Report
The effect of the report of the National Advisory Commission on Civil Disorders varied.

1. Presidential ambivalence: President Johnson took more actions for racial equality than any president of the twentieth century, yet he was concerned about a report that cast blame on white Americans—by far the largest voting bloc of the time period. Proud of his achievements with the Civil Rights Act and Voting Rights Act, Johnson was hesitant to take steps that would cause his political enemies to portray him as a radical. As such, he did not rush to take action on the committee’s recommendations.

2. Popularity with educated liberals: The Kerner Report was released as a book in 1968, and it became a bestseller. It did particularly well with college-educated liberals who were willing to accept white racism as a root cause of Black suffering.

3. Rejection by white people in general: The overall white population—particularly those who had not attended college—was skeptical of the idea that white society was to blame for Black disenfranchisement. This group had already grown wary of Johnson following the passage of his Civil Rights, Voting Rights, and Great Society initiatives, and the Kerner Report gave them one more reason to dislike him.

4. More suffering for the Black community: The Rev. Dr. Martin Luther King, Jr. called the Kerner Report a “physician’s warning of approaching death, with a prescription for life.” Yet little more than two months after its public release, King himself would be murdered by a white supremacist in Memphis, Tennessee. King’s murder would touch off a new round of rioting. Washington, DC saw the worst of this rioting, and many of the riots’ victims were Black Americans.

5. Blowback from the right: In the 1968 presidential election, Richard Nixon of California ran on the promise of “law and order” to tamp down on urban unrest. While many students, Black Power activists, and others saw Nixon’s pledge as thinly-veiled racism, it resonated with enough of the public that Nixon won the presidency. He later cruised to re-election in 1972 before the Watergate scandal ended his political career. For the next several decades, politicians downplayed racial strife and many of the Kerner Commission’s recommendations went unheeded.