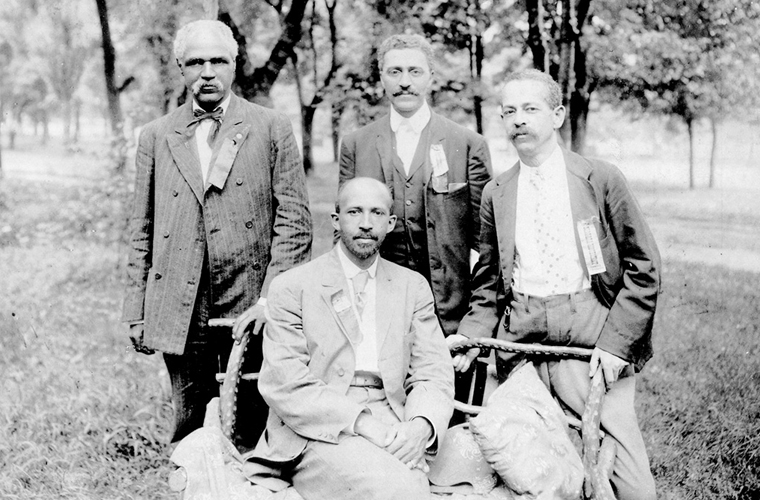 The Niagara Movement was a civil rights group organized by W.E.B. DuBois and William Monroe Trotter in July 1905.  After being denied admittance to hotels in Buffalo, New York, the group of 29 business owners, teachers, and clergy, who comprised the initial meeting, gathered near Niagara Falls in Ontario, Canada. The group’s name was derived from their meeting location.

The principles behind the Niagara Movement were largely in opposition to Booker T. Washington’s philosophy of Accommodationism.  Trotter, the editor of the Boston Guardian, had publicly reprimanded Washington at a Boston, Massachusetts meeting in 1903.  In The Souls of Black Folk (1903), DuBois had also condemned Washington for his lowered expectations for African Americans.  The Niagara Movement drafted a “Declaration of Principles,” part of which stated: “We refuse to allow the impression to remain that the Negro-American assents to inferiority, is submissive under oppression and apologetic before insults.”

The Niagara Movement attempted to bring about legal change, addressing the issues of crime, economics, religion, health, and education.  The Movement stood apart from other black organizations at the time because of its powerful, unequivocal demand for equal rights.  The Niagara Movement forcefully demanded equal economic and educational opportunity as well as the vote for black men and women.  Members of the Niagara movement sent a powerful message to the entire country through their condemnation of racial discrimination and their call for an end to segregation.

While the movement had grown to include to 170 members in 34 states by 1906, it also encountered difficulties.  W.E.B. DuBois supported the inclusion of women in the Niagara Movement, William Monroe Trotter did not.  Trotter left the movement in 1908 to start his own group, the Negro-American Political League.

The Niagara Movement met annually until 1908.  In that year a major race riot broke out in Springfield, Illinois.  Eight blacks were killed and over 2,000 African Americans fled the city.  Symbolically important because it was the first northern race riot in four decades and because it was in the hometown of Abraham Lincoln, black and white activists, including members of the Niagara Movement, felt a new more powerful, interracial organization was now needed to combat racism.  Out of this concern, the National Association for the Advancement of Colored People (NAACP) was formed.  The Niagara Movement was considered the precursor to the NAACP and many of its members, such as W.E.B. DuBois, were among the new organization’s founders.