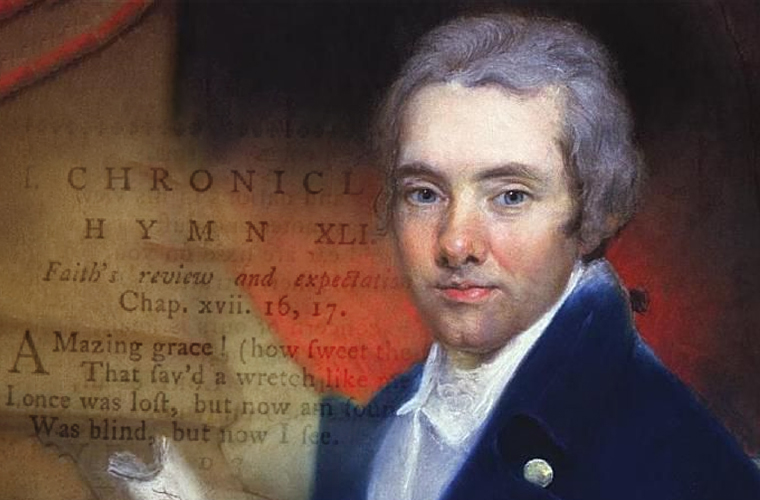 “Amazing Grace” is probably the most beloved hymn of the last two centuries. The soaring spiritual describing profound religious elation is estimated to be performed 10 million times annually and has appeared on over 11,000 albums. It was referenced in Harriet Beecher Stowe’s anti-slavery novel Uncle Tom’s Cabin and had a surge of popularity during two of nation’s greatest crises: the Civil War and the Vietnam War. Between 1970 and 1972, Judy Collins’ recording spent 67 weeks on the chart and peaked at number 5. Aretha Franklin, Ray Charles, Johnny Cash, Willie Nelson, and Elvis are among the many artists to record the song. Recently, President Obama burst into the familiar tune during the memorial service for Reverend Clementa Pinckney, a victim of a heinous church shooting in Charleston, South Carolina.

Ironically, this stirring song, closely associated with the African-American community, was written by a former slave trader, John Newton. This unlikely authorship forms the basis of Amazing Grace, the new Broadway musical (written by Broadway first-timer Christopher Smith, a former Philadelphia policeman, and playwright Arthur Giron) which tells Newton’s life story from his early days as a licentious libertine in the British navy to his religious conversion and taking up the abolitionist cause. But the real story behind the somewhat sentimental musical told in Newton’s autobiography reveals a more complex and ambiguous history.

Newton was born in 1725 in London to a Puritan mother who died two weeks before his seventh birthday, and a stern sea-captain father who took him to sea at age 11. After many voyages and a reckless youth of drinking, Newton was impressed into the British navy. After attempting to desert, he received eight dozen lashes and was reduced to the rank of common seaman.

While later serving on the Pegasus, a slave ship, Newton did not get along with the crew who left him in West Africa with Amos Clowe, a slave trader. Clowe gave Newton to his wife Princess Peye, an African royal who treated him vilely as she did her other slaves. On stage, Newton’s African adventures and enslavement are a bit more flashy with the ship going down, a thrilling underwater rescue of Newton by his loyal retainer Thomas, and an implied love affair between Newton and the Princess.

The stage version has John’s father leading a rescue party to save his son from the calculating Princess, but in actuality, the enterprise was undertaken by a sea captain asked by the senior Newton to look for the missing John. (In the show, the elder Newton is wounded during the battle for his son’s freedom and later has a tearful deathbed scene with John on board ship.)

During the voyage home, the ship was caught in a horrendous storm off the coast of Ireland and almost sank. Newton prayed to God and the cargo miraculously shifted to fill a hole in the ship’s hull and the vessel drifted to safety. Newton took this as a sign from the Almighty and marked it as his conversion to Christianity. He did not radically change his ways at once, his total reformation was more gradual. “I cannot consider myself to have been a believer in the full sense of the word, until a considerable time afterward,” he later wrote. He did begin reading the Bible at this point and began to view his captives with a more sympathetic view.

In the musical, John abjures slavery immediately after his shipboard epiphany and sails to Barbados to search for and buy the freedom of Thomas. After returning to England, Newton and his sweetheart Mary Catlett dramatically confront the Prince of Wales and urge him to abolish the cruel practice. In real life, Newton continued to sell his fellow human beings, making three voyages as the captain of two different slave vessels, The Duke of Argyle and the African. He suffered a stroke in 1754 and retired, but continued to invest in the business. In 1764, he was ordained as an Anglican priest and wrote 280 hymns to accompany his services. He wrote the words for “Amazing Grace” in 1772 (In 1835, William Walker put the words to the popular tune “New Britain”)

It was not until 1788, 34 years after leaving it that he renounced his former slaving profession by publishing a blazing pamphlet called “Thoughts Upon the Slave Trade.” The tract described the horrific conditions on slave ships and Newton apologized for making a public statement so many years after participating in the trade: “It will always be a subject of humiliating reflection to me, that I was once an active instrument in a business at which my heart now shudders.” The pamphlet was so popular it was reprinted several times and sent to every member of Parliament. Under the leadership of MP William Wilberforce, the English civil government outlawed slavery in Great Britain in 1807 and Newton lived to see it, dying in December of that year. The passage of the Slave Trade Act is depicted in the 2006 film, also called Amazing Grace, starring Albert Finney as Newton and Ioan Gruffud as Wilberforce.