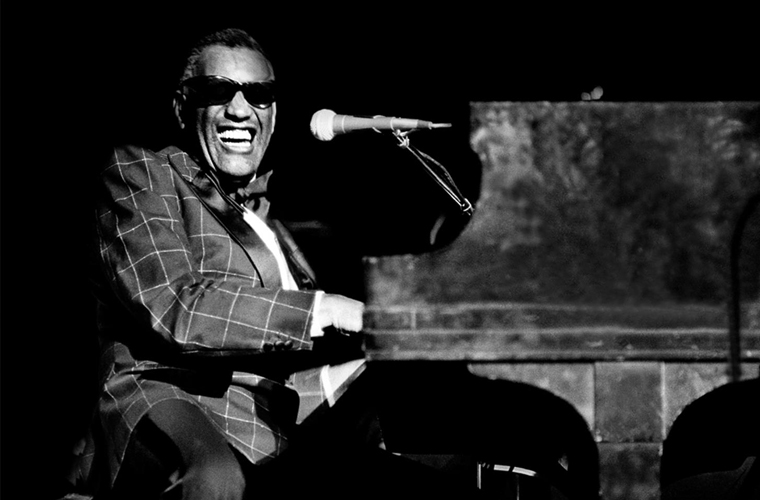 When Charles was an infant his family moved to Greenville, Florida, and he began his musical career at age five on a piano in a neighborhood café. He began to go blind at six, possibly from glaucoma and had completely lost his sight by age seven. He attended the St. Augustine School for the Deaf and Blind, where he concentrated on musical studies, but left school at age 15 to play the piano professionally after his mother died from cancer (his father had died when the boy was 10).

Charles built a remarkable career based on the immediacy of emotion in his performances. After emerging as a blues and jazz pianist indebted to Nat King Cole’s style in the late 1940s, Charles recorded the boogie-woogie classic “Mess Around” and the novelty song “It Should’ve Been Me” in 1952–53. His arrangement for Guitar Slim’s “The Things That I Used to Do” became a blues million-seller in 1953. By 1954 Charles had created a successful combination of blues and gospel influences and signed on with Atlantic Records. Propelled by Charles’s distinctive raspy voice, “I’ve Got a Woman” and “Hallelujah I Love You So” became hit records. “What’d I Say” led the rhythm and blues sales charts in 1959 and was Charles’s own first million-seller.

Charles’s rhythmic piano playing and band arranging revived the “funky” quality of jazz, but he also recorded in many other musical genres. He entered the pop market with the best-sellers “Georgia on My Mind” (1960) and “Hit the Road, Jack” (1961). His album Modern Sounds in Country and Western Music (1962) sold more than a million copies, as did its single “I Can’t Stop Loving You.” Thereafter his music emphasized jazz standards and renditions of pop and show tunes.

From 1955 Charles toured extensively in the United States and elsewhere with his own big band and a gospel-style female backup quartet called the Raeletts. He also appeared on television and worked in films such as Ballad in Blue (1964) and The Blues Brothers (1980) as a featured act and soundtrack composer. He formed his own custom recording labels, Tangerine in 1962 and Crossover Records in 1973. The recipient of many national and international awards, he received 13 Grammy Awards, including a lifetime achievement award in 1987. In 1986 Charles was inducted into the Rock and Roll Hall of Fame and received a Kennedy Center Honor. He published an autobiography, Brother Ray: Ray Charles’ Own Story (1978), written with David Ritz. He was the subject of the acclaimed biopic Ray (2004), which starred Jamie Foxx as Charles in an Academy Award-winning performance.