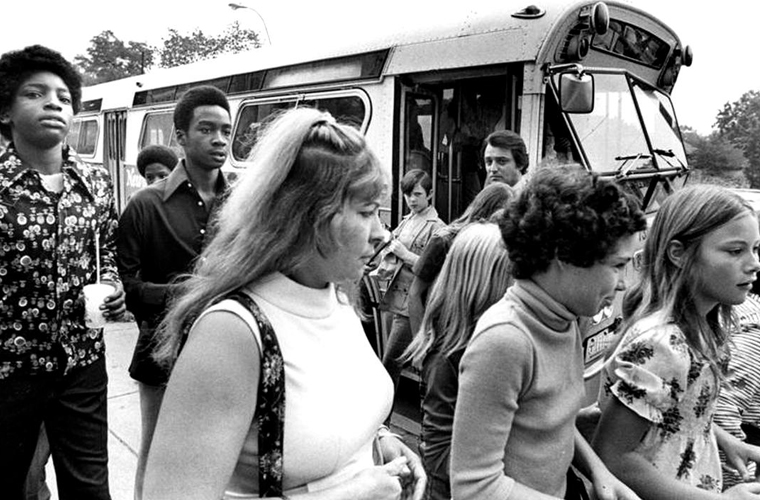 In the summer of 1974, South Boston began its ride toward becoming a war zone.

In 1974, Federal District Court Judge W. Arthur Garrity ruled that the Boston School Committee had deliberately segregated the city’s schools, creating one system for Blacks and another for Whites — separate, unequal, and unconstitutional.

And there was hardly a soul in South Boston who accepted the idea that the remedy to achieve racial balance and desegregate schools was busing. Unrest grew in the streets of Southie as some 18,000 Black and White students were ordered to take buses to schools outside of their neighborhoods.

Anti-busing demonstrations grew larger and louder as White parents in South Boston refused to send their children to nearby Black schools in Dorchester. The buses carrying the Black students from Dorchester were pelted by rocks as South Boston High School became a battlefield, while Boston Tactical Police Force regiments worked brutally and unsuccessfully to keep the peace inside the beleaguered school’s walls. The iconic photo of a White teen, Joe Rakes, attacking a Black man with the American flag said it all. Nothing was sacred. Racial violence was the rule of the land.

Members of the National Socialist White People’s Party dressed as Nazi storm troopers strategizing to oppose school integration in Boston, 1974. Karen Weeks Rakes, who eventually married Joe Rakes, was a sophomore at South Boston High School when busing began. “I remember how the state troopers were all lined up, inside and outside classrooms, making me wonder if I were in school or a war zone,” she says. “When one of our students, Michael Faith, was stabbed, the school was closed for a month. When we came back, there were metal detectors at the doors and we had to stand in long lines before we could even get into the school.”

Busing unrest was not the only force at work menacing the streets of Southie. The crime world was having its own war after the 1965 release of future Irish Mob boss James “Whitey” Bulger from Alcatraz. He’d served nine years for bank robbery, only to return to South Boston, where he had grown up in the housing projects. His ascent to the top of the criminal world began thanks to a feud between two gangs: The Mullens and the Killeens.

Who were the Mullens and the Killeens? Here’s your scorecard: The Mullens, an Irish-American gang operating in South Boston, got its name from the gang’s home base in Joseph Mullen Square at O and East Second Street. Their criminal activities included racketeering, armed robbery, auto theft, burglary, extortion, loansharking, illegal gambling, and murder. Their allies included the Winter Hill Gang of Somerville, north of Boston, which also attracted mobsters of predominantly Irish and Italian descent.

Things got dicey in 1971, when Donald Killeen’s younger brother, Kenneth, bit off the nose of Mickey Dwyer.

Winter Hill hit its peak starting in 1965, under the rule of James Buddy McLean and Howie Winter, until the takeover led by Bulger in 1979. In the 1970s, the gang was proficient at murdering rival mobsters in order to take over their rackets. By 1979, however, Howie Winter and the rest of the Somerville crew were all sent to prison for fixing horse races, leaving Bulger as one of the new leaders of the Winter Hill gang.

Meanwhile, the Irish-American Killeen brothers, Donald, Kenneth, George, and Edward, ran the bookmaking and loansharking in Southie. It was inevitable they would soon butt heads. Things got dicey in 1971, when Donald Killeen’s younger brother, Kenneth, bit off the nose of Mickey Dwyer, a member of the Mullen gang, during an argument at the Transit, a local watering hole. Shortly after the nose incident, Mullen members Paulie McGonagle, Francis (Buddy) Leonard, Tommy King, and Dennis (Buddy) Roache went to the Transit, the Killeen gang’s main base of operations, to confront the Killeens, who had already left. The presence of the Mullens at the Killeen’s headquarters was viewed as a direct challenge by Donald Killeen.

The long list of assassinations followed for several weeks after the Transit incident but escalated when Killeen enforcers Bulger and Billy O’Sullivan killed Donald McGonagle — not himself a gang member — by mistake.

As described by Bulger’s longtime lieutenant Kevin Weeks in his book BRUTAL: The Untold Story of My Life Inside Whitey Bulger’s Irish Mob, McGonagle’s death was a wrong place, wrong time situation. Bulger allegedly drove up beside Mullen member Paulie McGonagle and shouted his name. When McGonagle turned, Bulger shot him — just as he realized that it was Paulie’s brother, Donald. “Donald was the most likable of the McGonagle brothers, the only one who wasn’t involved in anything,” Weeks writes. “Jimmy drove straight to Billy O’Sullivan’s house on Savin Hill Avenue and told Billy O., who was at the stove cooking, ‘I shot the wrong one. I shot Donald.’ Billy looked up from the stove and said, ‘Don’t worry about it. He wasn’t healthy anyway. He smoked. He would have gotten lung cancer. How do you want your pork chops?’”

Surrounded by police, Black students board a bus at South Boston High School on Sept. 12, 1974, the first day of school under the new busing system put in place to desegregate Boston Public Schools. The system was met with strong resistance from many city residents.

Donald’s brother, Paulie McGonagle — an actual mobster — vowed revenge and, according to Mullen member Patrick Nee, personally murdered O’Sullivan. But Bulger came out on top after a Mullen gang enforcer shot Killeen gang mob boss Donald Killeen in 1972. The leadership of the Killeen faction then landed on Bulger, who was in hiding on Cape Cod. Nee arranged for their dispute to be mediated by leaders of other crime families, and after a sit-down, the gangs joined forces with Howie Winter of the Winter Hill gang as the overall boss. From 1973 on, he would control the rackets in South Boston, murdering rivals and taking out enemies until he went on the run in 1994.

Ironically, Bulger, rather than recruit talent from the enraged Southie high school kids who were relishing fighting in the streets to preserve their city’s integrity, reportedly did all he could to quell the local hooligans from causing more anti-busing turmoil. Many said it was because Whitey had no desire to have a continued federal government presence in the streets while he was building up his own crime operation. Still, the chaos in Southie helped Bulger enlist the services of one of his future lieutenants, a recent graduate of Southie who’d been hired to help keep order in the school’s corridors. Bulger offered Kevin Weeks a lot more money than the school was paying him, and a key criminal arrangement that was to last for 25 years began.

Karen Weeks Rakes, who was also Kevin Weeks’ sister, was grateful that her parents were able to get her out of the busing unrest in the ’70s, but she regrets how many students were not so lucky. “Lots of kids, practically a whole generation of them, simply dropped out and never got a high school education,” she says. “That was a crime.”