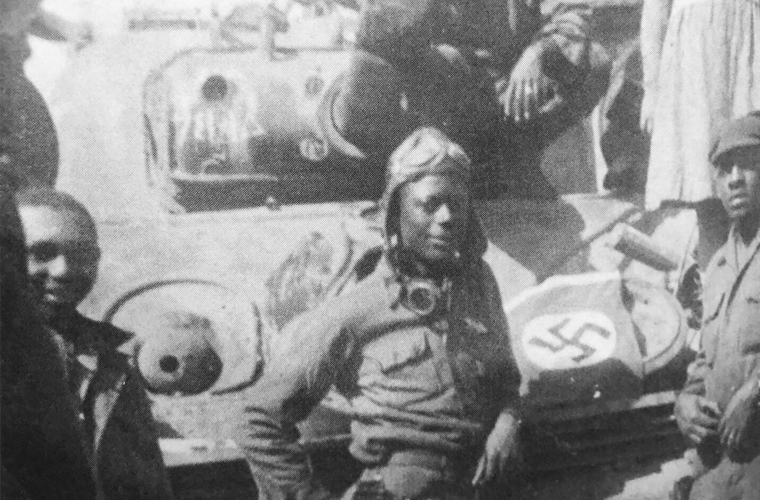 He’s 95 now, and many of his Army comrades are gone. That makes retired Cpl. James W. Baldwin one of the last living black liberators, the African American soldiers who rolled into Holland in 1945 to fight the Nazis and helped free the Dutch from German occupation.

Baldwin still remembers that push in the final months of World War II. He fired an 81mm mortar gun at Nazi troops, who had a stranglehold on Holland during the war. Thousands of Dutch Jews had been rounded up and sent to concentration camps. The country had been ravaged by the horrors of genocide, hunger, and starvation.

“We took 23 cities in three days,” recalled Baldwin, who fought with the U.S. Army’s all-black 784th Tank Battalion. “We were really moving. We were taking the cities, meaning killing Germans, and running them out. We came in and freed them. We liberated them. To know I had a role in the liberation of Holland means a lot.”

Last week in Washington, the Embassy of the Netherlands honored Baldwin and hundreds of other black soldiers as part of its commemoration of the 75th anniversary of liberation.

“The citizens of the Kingdom of the Netherlands express their sincere appreciation and gratitude for your sacrifice, courage, and willingness to fight for freedom while enduring the hardships of war,” the embassy wrote in a certificate of appreciation presented to Baldwin. “… Seventy-five years later, the footprints of courageous men like you are still found in our thriving economy, our stable government, and in our hearts and minds. Freedom sways in the wind while our flag flutters in peace. We will never forget.”

The liberation of Holland, which had been invaded by the Nazis in 1940, began after thousands of Allied troops landed at Normandy on June 6, 1944. The Allied forces drove German troops from France and Belgium. By September 1944, the Allies arrived in the Netherlands.

“When the fighting ended, Europe broke free of Nazi occupation, and thousands and thousands of soldiers had died, including Americans — 8,291 buried in the cemetery in Margraten,” said Commodore Paul Herber, the embassy’s defense attache. “In many ways, the cemetery is to the Netherlands what Arlington National Cemetery is to the United States. It is hallowed grounds. One cannot walk through Margraten without feeling the sacrifices American soldiers made to free Europe and the Netherlands.”

Dutch families have adopted each grave at Netherlands American Cemetery in Margraten, making sure it is tended.

Every year, these families lay flowers on the graves. “They pay respect and honor soldiers’ sacrifices,” Herber said. “Many Dutch families have connected with the soldiers’ families. They’ve developed bonds and forged friendships across the Atlantic Ocean.”

In 2009, the Netherlands began trying to correct that oversight. Historians in the Netherlands and in the United States began work on a black liberators project by trying to find descendants and relatives of the 172 who gave their lives to defeat the Nazis.

“We are determined to find each and every one of the families,” said Ric Murphy, national vice president for the history of the Afro-American Historical and Genealogical Society. “When you think about these men who went into World War II, came from the segregated South, predominantly, many of them went into battle so they could be treated like men, and come out with certain dignities. They went to a foreign land to fight a foreign war to liberate foreign people. And many of them who survived came back to a segregated South, to an environment where they, themselves, were not treated as free men.”

But, Murphy said, some of the men who came home never talked about the war, never shared stories with their families.

Researchers working on the black liberator’s project have found families of 24 black soldiers, including LaVonne Taliaferro-Bunch, whose great-uncle Lynwood Taliaferro was killed in the Netherlands in May 31, 1945.

“His body rests in the Netherlands at the Margraten Cemetery,” Herber said. “For many, this is an unknown story — not only here but in the Netherlands. We want everyone to know the Netherlands has not forgotten the efforts of these heroes. We will continue these efforts and find the descendants of those who paid the ultimate sacrifice for our liberation.”

In 2015, Baldwin received a letter from G.H. Beusker in the Netherlands. Baldwin’s battalion had liberated the town of Venlo on March 1, 1945.

“My mother, who was 9, was looking out a window and saw the first Afro-American soldiers slowly coming down the street, close to the houses,” Beusker wrote. “At the time she had already been hiding for weeks, with the rest of her family in the house of an aunt.”

Beusker remembers the British shelling the German troops on the “Venlo side” of the River Meuse. “The bridge and the Luftwaffe base east of the town were bombed repeatedly in 1944 by the Allies,” Beusker wrote. Eventually, the Germans blew up the bridge in November 1944. “Those bombings have claimed many civilian casualties, but never have I heard grievances by the generation that experienced the war against the allies. Only gratitude.”