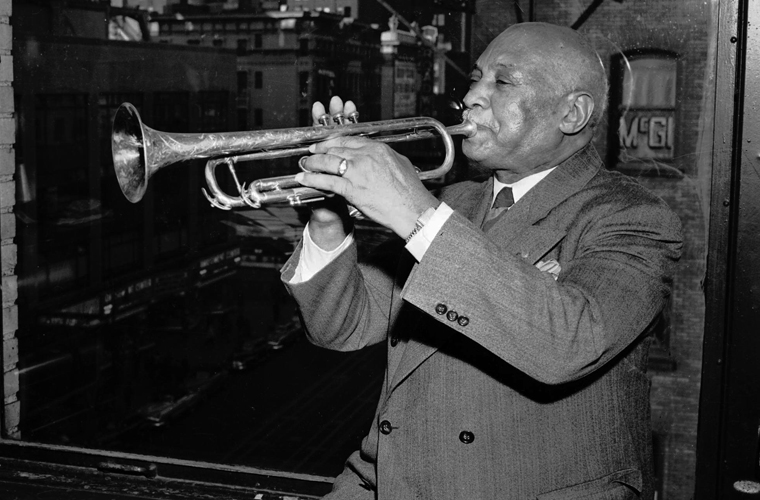 William Christopher Handy was born on November 16, 1873, in Florence, Alabama. He grew up in a log cabin that his grandfather had built on what is now called College Street. As a young child, he displayed a keen interest in music and his intuitive ear could catalog the musical notes of songbirds, the whistles from nearby river boats, and even the rhythms of the Tennessee River. However, musical talent, especially the playing of musical instruments, was frowned upon by his family and church.

Despite Handy’s lack of encouragement, he longed to own a guitar that he had seen in a local shop window and he secretly saved the money he made by picking berries and nuts and making lye soap. When he had finally saved enough money to buy the guitar, he proudly brought it home to his shocked and dismayed family. Handy’s father made him take the guitar back and exchange it for a dictionary.

Handy joined a local blues band as a teenager, but he kept this fact a secret from his parents. He purchased a cornet from a fellow band member and spent every free minute practicing it. An exceptional student in school, he placed near the top of his class. In September of 1892, Handy traveled to Birmingham to take a teaching exam, which he passed easily. He obtained a teaching job in Birmingham but soon learned that the teaching profession paid poorly. He quit the position and found work at a pipe works plant in nearby Bessemer.

During his free time, he organized a small string orchestra and taught musicians how to read notes. He formed a quartet called the “Lauzetta Quartet”. When the group read about the upcoming World’s Fair in Chicago, they decided to attend. The trip to Chicago was long and arduous. To pay their way, group members performed odd jobs along the way. They finally arrived in Chicago only to learn that the World’s Fair had been postponed for a year. The group then headed to St. Louis but working conditions there proved to be very bad. The Laurzetta Quartet disbanded and Handy subsequently left St. Louis for Evansville, Indiana.

In Evansville, Handy’s luck changed dramatically. He joined a successful band that performed throughout the neighboring cities and states. While performing at a barbecue in Henderson, Kentucky, he met Elizabeth Price, and they married shortly afterward (on July 19, 1896).

Handy received a letter from a musician friend in August of 1896, inviting him to join a minstrel group called “Mahara’s Minstrels.” He saw this as a great opportunity even though minstrel groups (traveling bands that roamed from city to city) were not highly regarded. Handy and his new wife Elizabeth traveled to Chicago where Handy took the job with Mahara’s Minstrels at a salary of $6 per week. The three-year minstrel tour took them throughout the southwestern states of Texas and Oklahoma, across the Southeast through Tennessee and Georgia, and south to Florida and eventually to Cuba. Life on the road was not an easy way to make a living and Elizabeth especially grew weary of it. Following their return from Cuba, the group headed north again, stopping along the way for a performance in Huntsville, Alabama. Handy decided to stay in Florence with his family for a much-needed rest.

While in Florence, Elizabeth gave birth to the first of six children (a daughter named Lucille) on June 29, 1900, in Florence. During this time, Handy was approached by W.H. Councill, President of Agricultural and Mechanical College in Normal, Alabama, about a teaching position. The university was one of two black colleges in the state of Alabama at the time (the other being Tuskegee University). Handy accepted the offer and became a faculty member in September of that year.

He was soon disheartened to discover that American music was often cast aside by the college and instead emphasized inferior foreign music considered to be “classical”. It also became apparent that Handy was being underpaid and he could make much more money touring with the minstrel group. After a dispute with President Councill, Handy resigned his position and rejoined the Mahara Minstrels to tour states in the Midwest and Pacific Northwest. In 1903, he received an offer to direct a black band called the Knights of Pythias in Clarksdale, Mississippi. This job proved to be very rewarding and Handy remained there for six years.

In 1909, Handy and his band moved to Memphis, Tennessee where they established their headquarters on the famous Beale Street. Handy’s years of observing the reactions of white people to native black music as well as his own study of the music, habits, and attitudes of his race, began to affect his music sparking the beginnings of what would later be called “the blues.” The first composition of this type was a campaign song that Handy composed for E. H. Crump, a Memphis candidate for mayor who was running on a reform platform. The song, “Mr. Crump,” was later titled “Memphis Blues” and became very popular.

“Memphis Blues” was such a huge success that Handy published it in 1912. Although he sold the rights to the song for a mere $100, his musical style had been asserted and in 1914, at the age of 40, he published his most famous composition, “St. Louis Blues.” Handy began to write and publish prolifically and his popularity soared. He opened his own publishing business and worked steadily throughout the 1920s and 1930s despite problems with his vision. His eyes had been sensitive since childhood and the heavy demands of his career took their toll on his vision. In 1943, he lost his balance and fell from a subway station which caused him to go totally blind.

In addition to composing, Handy worked laboriously at compiling blues tunes which he published in a book called Blues: An Anthology in 1926. He later published Negro Authors And Composers of the United States (1935), and Unsung Americans Sung (1944). His biography, Father of the Blues was published in 1941.

Handy’s wife, Elizabeth, died in 1937. Handy later married Irma Louise Logan in 1954 at the age of 80. He suffered a stroke one year later and was confined to a wheelchair. Still, a very popular figure, Handy’s 84th birthday party was held at the Waldorf-Astoria with more than 800 people attending.

He died on March 28, 1958, of acute bronchial pneumonia at the age of 84. He was buried in Woodlawn Cemetery, Bronx, New York with many notables attending the funeral service and an estimated 150,000 people along the funeral route.