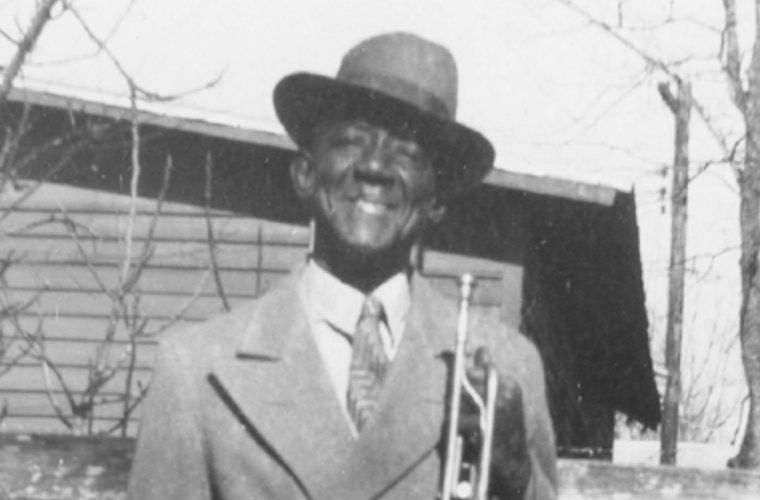 William Geary “Bunk” Johnson, pioneering jazz trumpeter; b. New Orleans, La., Dec. 27, 1889(not 1879; confirmed by censuses); d. New Iberia, La., July 7, 1949. Bunk’s father had known slavery, and his mother was an Indian of the Black Creek tribe. Bunk married twice, he raised a very large family, and his second wife, Maude, was the sister of George Baquet. Bunk began playing cornet during early childhood, later he studied with “Professor” Wallace Cutchey of New Orleans Univ. During the 1890s he worked with Adam Olivier’s Orch., later played in bands led by Buddy Bolden and Bob Russell. By 1900 he had begun touring and visited Mexico with P. G. Loral’s Circus Band; he traveled extensively in the early 1900s with McCabe’s Minstrels, Hagenback’s and Wallace’s Circus, visiting N.Y. in 1903 and San Francisco in 1905. (Bunk also claimed to have worked in England about this time.) In between trips he returned regularly to New Orleans. He is said to have worked regularly on liners sailing to the Orient, Australia, and Europe.

He eventually settled in New Orleans in 1910 and worked with Frankie Dusen’s Eagle Band and Billy Marrero’s Superior Band. He also resumed playing dates with the Old Excelsior, Allen’s Brass Band, etc. Bunk worked in Alexandria, La., with Clarence Williams and played regular dates at cabarets in New Orleans including a spell at Pete Lala’s. Bunk left New Orleans c. 1914, taught for a while in Mandeville, then worked with various bands in Baton Rouge, Boga-lusa, and Lake Charles. He then left La. to resume touring with minstrel shows and circus bands. Johnson later played in theatre orchestras, and then toured with Dee Johnson’s Band (c. 1927-29). He settled temporarily in Tex. (1930), then worked with Sam Price at the Yellow Front Cafe in Kansas City, Mo. (c. 1930). He moved back to La., worked with the Imperial Band in Lake Charles (pianist Nellie Lutcher was in the band), Gus Fortinet’s Band in New Iberia, the Yelping Hound Band in Crow-ley, and with trumpeter Evan Thomas’s Black Eagle Band in November 1931. Thomas was stabbed to death by John Guillory while playing at a dance in Rayne. Unconfirmed reports say that Johnson’s trumpet was damaged in the skirmish. Johnson continued gigging and played a one-nighter with Paul Barnes in 1933.

Eventually, Johnson lost all his teeth to pyorrhea and had to stop playing. He settled in New Iberia and did various day jobs, including caretaking and driving a truck and trailer for sugar and rice companies. He also undertook paid engagements as a whistler at local fairgrounds. In early 1939 he was contacted by William Russel and Frederic Ramsey Jr. after Louis Armstrong and Clarence Williams mentioned Johnson during research interviews for the book jazzmen. From May 1940-July 1941, Johnson was employed as a music teacher by the Works Progress Administration; the teaching schedule (which involved 118 pupils) prevented his taking part in a 1940 recording session in New Orleans. A plan to record with Earl Hines and Sidney Bechet failed to materialize, so Rex Stewart did the session. Johnson began gigging with local bands, moved into New Orleans temporarily, and played one date with Allen’s Brass Band.

In June 1942, Johnson issued his first recordings. He returned to New Iberia to do haulage work before leaving for Calif. He played his first concert in San Francisco on April 12, 1943. Along with doing day work in a drugstore, he also gigged with Baker Millian and played Sunday afternoon sessions at the C.I.O. Hall with Lu Watters’s sidemen (July 1943-January 1944). Johnson played one date with Kid Ory and recorded for World Transcription Service just before leaving Calif. (July 1944). He returned to La. where he did more recordings; also playing dates in Opelousas with a band led by pianist Tex Parker.

Johnson played at the New Orleans Jazz Foundation Concert in January 1945. He then moved to N.Y. in March 1945, playing one date at Jimmy Ryan’s prior to working with Sidney Bechet’s Band at Savoy Cafe, Boston, from March 12, 1945. Johnson left the band in April (temporarily replaced by Pete Bocage, whose place was soon taken by Johnny Windhurst) to return to La. There he organized a band for residency at Stuyvesant Casino, N.Y. (Sept. 28, 1945-Jan. 12, 1946), and again led at Stuyvesant Casino (April 10-31-May 1946). The unit disbanded and Bunk returned to New Iberia and played dates as a guest star, including two concerts in Chicago in the fall of 1946. He worked in and around Chicago from April until June 1947. Johnson played concerts at the N.Y. Town Hall in the autumn of 1947, played gigs at Caravan Ballroom, N.Y.C., then organized his own band (aided by Harold Drob, a former G.I.), using N.Y. musicians. He made his last recordings in December 1947, then returned to his home in New Iberia. In late 1948 he suffered a stroke that paralyzed his left arm; for the rest of his life, he was semi-invalid.