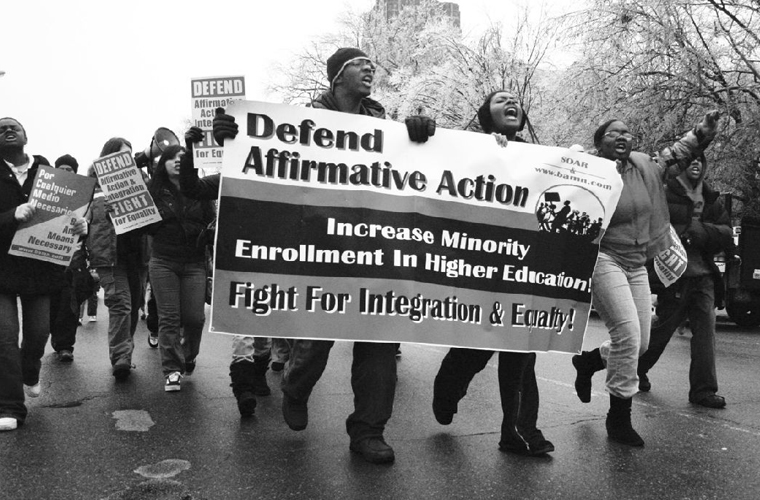 Affirmative action, in the United States, an active effort to improve employment or educational opportunities for members of minority groups and for women. Affirmative action began as a government remedy to the effects of long-standing discrimination against such groups and has consisted of policies, programs, and procedures that give preferences to minorities and women in job hiring, admission to institutions of higher education, the awarding of government contracts, and other social benefits. The typical criteria for affirmative action are race, disability, gender, ethnic origin, and age.

Affirmative action was initiated by the administration of President Lyndon Johnson (1963–69) in order to improve opportunities for African Americans while civil rights legislation was dismantling the legal basis for discrimination. The federal government began to institute affirmative action policies under the landmark Civil Rights Act of 1964 and an executive order in 1965. Businesses receiving federal funds were prohibited from using aptitude tests and other criteria that tended to discriminate against African Americans. Affirmative action programs were monitored by the Office of Federal Contract Compliance and the Equal Employment Opportunity Commission (EEOC). Subsequently, affirmative action was broadened to cover women and Native Americans, Hispanics, and other minorities and was extended to colleges and universities and state and federal agencies.

By the late 1970s, the use of racial quotas and minority set-asides led to court challenges of affirmative action as a form of “reverse discrimination.” The first major challenge was Regents of the University of California v. Bakke (1978), in which theU.S. Supreme Court ruled (5–4) that quotas may not be used to reserve places for minority applicants if white applicants are denied a chance to compete for those places. Although the court outlawed quota programs, it allowed colleges to use race as a factor in making college admissions decisions. Two years later a fragmented court upheld a 1977 federal law requiring that 10 percent of funds for public works be allotted to qualified minority contractors.

The Supreme Court began to impose significant restrictions on race-based affirmative action in 1989. In several decisions that year, the court gave greater weight to claims of reverse discrimination, outlawed the use of minority set-asides in cases where prior racial discrimination could not be proved and placed limits on the use of racial preferences by states that were stricter than those it applied to the federal government. In Adarand Constructors v. Pena (1995), the court ruled that federal affirmative action programs were unconstitutional unless they fulfilled a “compelling governmental interest.”

Opposition to affirmative action in California culminated in the passage in 1996 of the California Civil Rights Initiative (Proposition 209), which prohibited all government agencies and institutions from giving preferential treatment to individuals on the basis of their race or sex. The Supreme Court effectively upheld the constitutionality of Proposition 209 in November 1997 by refusing to hear a challenge to its enforcement. Legislation similar to Proposition 209 was subsequently proposed in other states and was passed in Washington in 1998. The Supreme Court also upheld a lower-court ruling that struck down as unconstitutional the University of Texas’s affirmative action program, arguing in Hopwood v. University of Texas Law School (1996) that there was no compelling state interest to warrant using race as a factor in admissions decisions. Afterward, there were further legislative and electoral challenges to affirmative action in many parts of the country. In the Bollinger decisions (2003), two landmark rulings involving admissions to the University of Michigan and its law school, the Supreme Court reaffirmed the constitutionality of affirmative action (Grutter v. Bollinger), though it ruled that race could not be the preeminent factor in such decisions as it struck down the university’s undergraduate admissions policy that awarded points to students on the basis of race (Gratz v. Bollinger).

Ten years later, in Fisher v. The University of Texas at Austin, the Supreme Court vacated and remanded an appeals court decision that had rejected a challenge to an affirmative action program modeled on the one approved in Gratz, finding that the lower court had not subjected the program to strict scrutiny, the most-demanding form of judicial review. After the appeals court upheld the program a second time, the Supreme Court affirmed that decision (2016), determining that strict scrutiny had been satisfied.