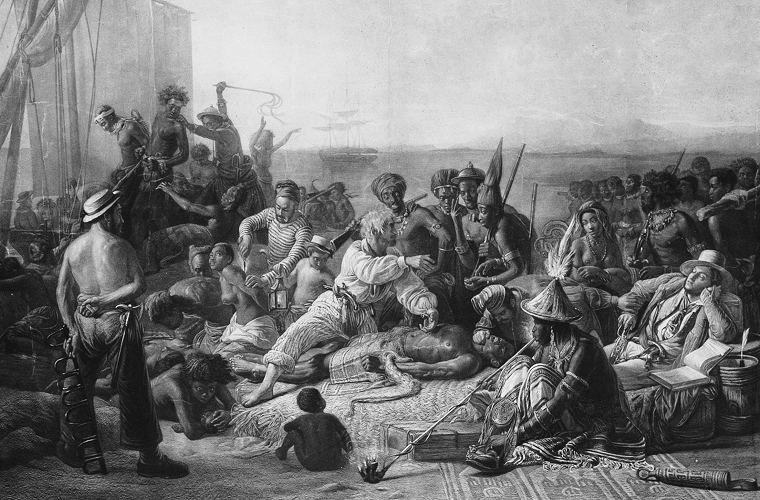 During the fifteenth and sixteenth centuries, European traders started to get involved in the Slave Trade. European traders had previously been interested in African nations and kingdoms, such as Ghana and Mali, due to their sophisticated trading networks. Traders then wanted to trade in human beings.

They took enslaved people from western Africa to Europe and the Americas. At first, this was on quite a small scale but the Slave Trade grew during the seventeenth and eighteenth centuries, as European countries conquered many of the Caribbean islands and much of North and South America.

Europeans who settled in the Americas were lured by the idea of owning their own land and were reluctant to work for others. Convicts from Britain were sent to work on the plantations but there were never enough so, to satisfy the tremendous demand for labor, planters purchased slaves.

Slavery changed when Europeans became involved, as it led to generation after generation of peoples being taken from their homelands and enslaved forever. It led to people being legally defined as chattel slaves.

A chattel slave is an enslaved person who is owned forever and whose children and children’s children are automatically enslaved. Chattel slaves are individuals treated as complete, property to be bought and sold. Chattel slavery was supported and made legal by European governments and monarchs. This type of enslavement was practiced in European colonies from the sixteenth century onwards.

How were they enslaved?
The principal methods of enslaving Africans were warfare, raiding, and kidnapping, though people were enslaved through judicial processes, debt and, in regions with unstable rainfall levels, drought famine. The degree of violence involved in enslaving people varied between regions and through time. Warfare was a common source of slaves in Senegambia, the Gold Coast, the Slave Coast (Bight of Benin) and Angola. Raiding and kidnapping seemed to have predominated in the Bight of Biafra, from where Equiano was exported.

Although some of the enslaved were forced to travel long distances to reach the coast, the costs of moving slaves, including the risk of deaths, meant that the homeland of the majority of enslaved Africans, who were taken away by the British, lay within a few hundred kilometers of the Atlantic coast.

Slave forts were established all along the coast of West Africa, to house captured Africans in holding pens (barracoons) awaiting transport. They were equipped with up to a hundred guns and cannons to defend European interests on the coast, by keeping competitors at bay. There were approximately 80 castles dotted along the slave-trading coast. The forts had the same basic design, with narrow windowless stone dungeons for captured Africans and fine European residences.

The largest of these forts was Elmina, in modern day Ghana. The fort had been fought over by the Portuguese, the Dutch and finally the British.  At the height of the trade, Elmina housed 400 company personnel, including the company director, as well as 300 ‘castle slaves’. The whole commerce surrounding the Slave Trade had created a town outside the castle, of about 1000 Africans.

In other cases, the enslaved Africans have kept on board the ships, until sufficient numbers were captured, waiting perhaps for months in cramped conditions, before setting sail.

The ethnic groups of the enslaved Africans
The British traders covered the West African coast from Senegal in the north to the Congo in the south, occasionally venturing to take slaves from South-East Africa in present-day Mozambique.

Some areas or venues on African Atlantic coast were more attractive to traders looking for the supply of enslaved people than others. This attractiveness was dependant on the level of support from the local chieftains rather than geographical barriers or the demography of local populations. Where there was cooperation it was easier to maintain order and efficiency in the process of the trade.

African rulers who were willing to supply enslaved Africans became very rich and powerful. They became well armed with guns from Europe. The numbers of wars increased and they became more violent because of the Europian guns and weapons. Many Africans died for every enslaved person who was eventually sold.

The enslaved Africans comprised a mixture of ethnic groups. However after 1660, two-thirds of Africans carried away by British ships came from just three regions – the Bight of Biafra, the Gold Coast, and Central Africa. Within the Bight of Biafra just two venues – Old Calabar on the Cross River and Bonny in the Niger Delta – supplied the great majority of slaves entering British ships. Overall, Igbos from the Bight of Biafra constituted probably the largest single ethnic group of enslaved Africans entering the British Slave Trade, followed by Akan from the Gold Coast and Bantu from central Africa.