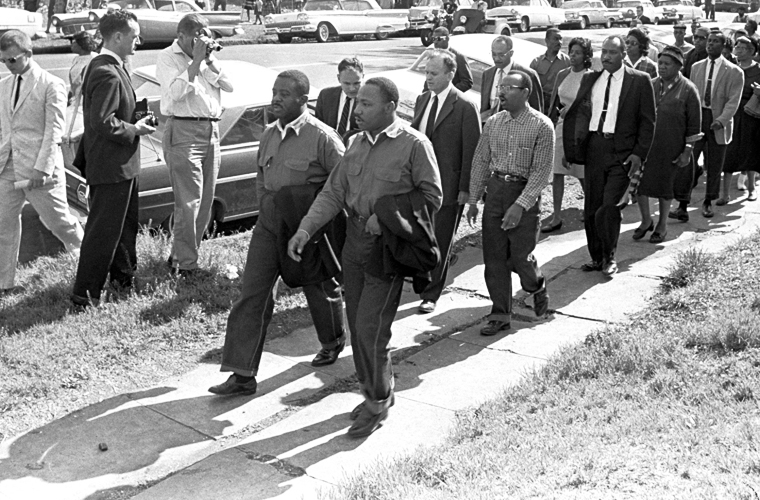 The Birmingham Campaign was a movement led in early 1963 by the Southern Christian Leadership Conference (SCLC) which sought to bring national attention to the efforts of local Black leaders to desegregate public facilities in Birmingham, Alabama. The campaign was led by Dr. Martin Luther King Jr. and Reverends James Bevel and Fred Shuttlesworth, among others.

In April 1963, King and the Southern Christian Leadership Conference (SCLC) joined Birmingham’s local campaign organized by Rev. Shuttlesworth and his group, the Alabama Christian Movement for Human Rights (ACMHR). The goal of the local campaign was to attack the city’s segregation system by putting pressure on Birmingham’s merchants during the Easter season, the second-biggest shopping season of the year. When that campaign stalled, the ACMHR asked SCLC to help.

The campaign was originally scheduled to begin in early March 1963 but was postponed until April. On April 3, 1963, it was launched with mass meetings, lunch counter sit-ins, a march on city hall, and a boycott of downtown merchants. King spoke to Birmingham’s Black citizens about nonviolence and its methods and appealed for volunteers. When Birmingham’s residents enthusiastically responded, the campaign’s actions expanded to kneel-ins at churches, sit-ins at the library, and a march on the county courthouse to register voters.

On April 10, 1963, the city government obtained a state court injunction against the protests. After the debate, campaign leaders decided to disobey the court order. King contemplated whether he and Ralph Abernathy—SCLC’s second-in-command—should be arrested. King decided that he must risk jail. On Good Friday, April 12, 1963, King was arrested in Birmingham after violating the anti-protest injunction and was placed in solitary confinement. During this time, he wrote “Letter from Birmingham Jail” on the margins of the Birmingham News, in reaction to a statement published by eight Birmingham clergymen condemning the protests.

King asked his jailers for permission to call his wife, Coretta Scott King, who at the time was home in Atlanta, recovering from the birth of their fourth child, Bernice King. They denied the request. After Mrs. King shared her concern about her husband’s safety with the Kennedy administration, Birmingham officials permitted King to call home. He was released on bail on April 20, 1963.

On May 2, 1963, more than one thousand African American students attempted to march into downtown Birmingham where hundreds were arrested. The following day, Public Safety Commissioner Eugene “Bull” Connor directed local police and fire departments to use force to halt the demonstrations. In the next few days’ images of children being blasted by high-pressure fire hoses, clubbed by police officers, and attacked by dogs appeared on television and in newspapers, sparking international outrage.

Attorney General Robert Kennedy sent Burke Marshall, his chief civil rights assistant, to negotiate between the Black citizens and Birmingham city business leadership. The business leaders sought a moratorium on street protests as an act of good faith before any settlement could be declared. Marshall encouraged the campaign leaders to halt demonstrations and accept this interim compromise. King and the other leaders agreed on May 8, 1963, and called off further demonstrations. On May 10, 1963, King and Fred Shuttlesworth announced an agreement with the city of Birmingham to desegregate lunch counters, restrooms, drinking fountains, and department store fitting rooms within ninety days, to hire Blacks in stores as salesmen and clerks, and to release of hundreds of jail protesters on bond.

Their victory, however, was met by violence. On May 11, 1963, a bomb damaged the Gaston Motel where King and SCLC members were staying. The next day, the home of King’s brother and Birmingham resident, Alfred Daniel King, was bombed. Four months later on September 15, 1963, Ku Klux Klan (KKK) members bombed Birmingham’s Sixteen Street Baptist Church which had been the staging center for many of the spring demonstrations. Four young Black girls—Addie Mae Collins, Cynthia Wesley, Carole Robertson, and Carol Denise McNair—were killed. Martin Luther King Jr. delivered the eulogy at their funeral on September 18, 1963. Nonetheless, Birmingham was considered one of the most successful campaigns of the civil rights era.