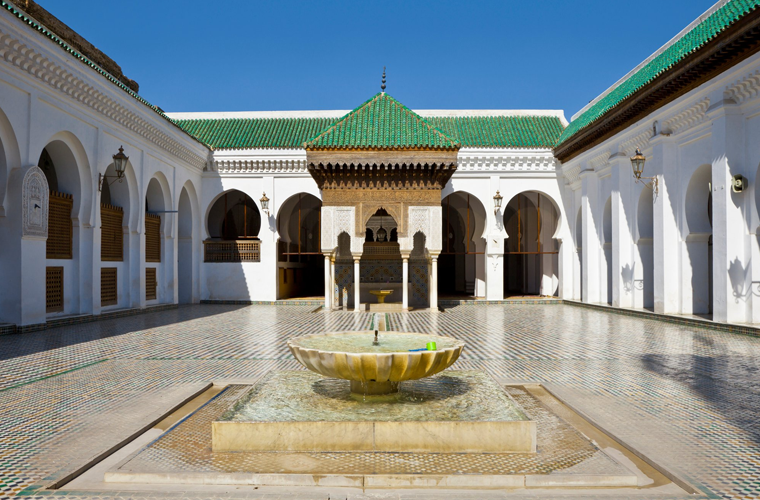 The story of Al Qarawiyyin University in Fez dates back to the 9th century when a wealthy family who left their original city Al kairouan (Tunisia) settled in Fez.

Taroudant – The story of Al Qarawiyyin University in Fez dates back to the 9th century when a wealthy family who left their original city Al kairouan (Tunisia) settled in Fez.

After the death of the family’s father, Mohamed Ben Abdullah Al Fihri, who was a successful merchant, his only two daughters Meriam and Fatima inherited his gigantic fortune.

According to Dr. Abdelhadi Tazi, in his doctoral proposal, Fatima, known as Ummou Al Banin, meaning mothers of the children, dedicated her wealth with the approval of the Idrissi king Yahya I to build the mosque for her community. Being a pious woman, Fatima made an oath to keep fasting until the construction of the mosque was completed and made her first prayer in the mosque as an act of gratitude, and thankfulness to the Almighty.

Dating back to 859, the Al Qarawiyyin University is no doubt older than Egypt’s Azhar University (970) and its European counterparts: the University of Oxford, which is regarded as the oldest university in the English-speaking world (roughly founded in 1096), and the University of Bologna (founded approximately in 1088).

The historic university of Fez is actually recognized by the Guinness Book of World Records as the oldest degree-granting university in the world. Moreover, UNESCO considers Qarawiyyin to have been a university since its founding.

Originally founded as a mosque, with an associated mosque school (madrasa) for the purpose of providing a place for the community to practice their religious rituals in comfort, the place of worship soon developed other functions. It became a place of religious instruction and Quran memorization, Arabic grammar, mathematics, music, chemistry, Islamic legislation, Sufism, medicines, astronomy, as well to study political debate and lessons focusing mainly on the natural sciences.

The mosque later set up the rest of its urban infrastructure. It was surrounded by places of lodging, businesses, “Hamams” – steam rooms, schools, etc. many of which still function properly today.

After the construction of the mosque, the scholars of Fez were able to make it a better place for education and scientific research that attracted many students from different parts of the world. Thanks to the successive dynasties that governed the city of Fez, Al Qarawiyyin mosque was expanded until it became the largest in Africa, with a capacity of 22,000 worshipers, and turned into a scientific center advancing the prestigious educational centers in Cordoba and Baghdad.

In the Middle Ages, the University of Al Qarawiyyin played a significant role in the mediation of culture and knowledge between Muslims and Europeans. In the fourteenth century, 8000 students from the Maghreb and Egypt were trained in Fez. The university also played an important role in spreading the teachings of Maliki School, one of four Sunni Islamic sects, which has adopted the doctrine of Imam Malik ibn Anas, in all the regions of North Africa.

The university was under the patronage of the Governor of Morocco and only the sultan could appoint teachers. However, the students were allowed to choose their teachers and curricula. Many famous scientists from the Islamic world namely Ibn Khaldun (founder of sociology) and some European scientists have studied at this university. In the West, the most famous alumnus is probably Pope Sylvester II, who made known in Europe Arab numbers, culture, and sciences including mathematics and astronomy.

During the colonial period, serious political decision-making, like allegiance, colonial resistance and war, and peace, was made in the form of a petition signed by Al Qarawiyyin scholars. The university took on a position of resistance and defiance to the colonizers. That was why the French occupiers to Morocco then called Al Qarawiyyin the “dark house.” More than that, the endowments of Al Qarawiyyin were considered a reserve for supporting Morocco in the face of any economic crisis emergency.

Among the most fascinating traditions of the university was the “caliph of one hour.” On the eve of spring, Al Qarawiyyin would organize a party like a carnival where students chose among themselves a governor for a week, from Friday to Friday. The elected student had the privilege to meet with the real king for an hour and had the right to discuss political and religious affairs as well as communicate his own thoughts openly with the king with no fear of oppression.

Since its foundation, Al Qarawiyyin has served as one of the leading spiritual and educational centers of the Muslim world. Its financial independence has been a strong advantage, for it has helped the university keep the same high-quality services in spite of weary times and harsh events that had shaken the stability of Morocco.