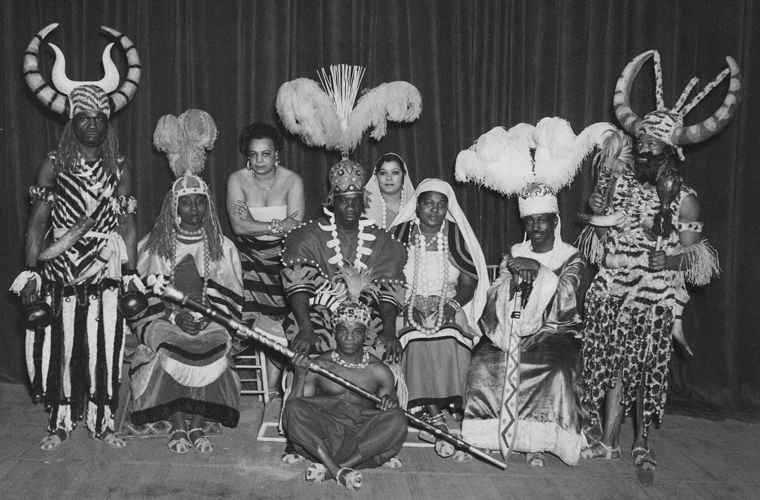 Formed by Abram Hill, Frederick O’Neal, and other actors in Harlem, New York in 1940, the American Negro Theatre (ANT) was an outgrowth of the illustrious Negro Unit of the Federal Theatre Project in Harlem. Active between 1940 and the mid-1950s, it was governed by four goals: to develop a permanent acting company trained in the arts and crafts of the theatre that also reflected the special gifts, talents, and attributes of African Americans; to produce plays that honestly and with integrity interpreted, illuminated, and criticized contemporary black life and the concerns of the black people (and particularly the Harlem community); to maintain an affiliation with, and provide leadership for, other black theatre groups throughout the nation; and to utilize its resources to develop racial pride in the theatre, rather than racial apathy. The earliest elected officers included Hill (chairman, artistic director, and resident playwright), O’Neal (assistant chairman, company manager) and John O’Shaughnessy. The major technicians were Perry Watkins, Charles Sebree, and Roger Furman, set designers; and George Lewis, lighting technician.

For five years (1940-1945), the theatre was housed in the basement of the Harlem Branch of the New York Public Library, known as the Harlem Library Little Theatre and specially renovated for the group. In 1945, ANT was forced to move from to the Elks Lodge at 15 West 126th Street, then known as the American Negro Theatre Playhouse. It later became the home of the Elks Community Theatre. ANT moved again in 1950, to a loft on West 125th Street, its last residence before the theatre closed.

ANT’s program was divided into three categories: stage production and a training and radio program. Stage productions included On Striver’s Row by Abram Hill (September 1940), Natural Man by Theodore Browne (May 1941), On Striver’s Row, the musical version by Hill (March 1941), Three is a Family by Phoebe and Henry Ephron (November 1943), which transferred to Broadway (April 1944), Anna Lucasta by Philip Yourdan, adapted by Abram Hill (June 194), Garden of Time by Owen Dodson (March 1945), Henri Christophe by Dan Hammersmith (June 1945), Home is the Hunter by Samuel Kootz (January 1946), On Striver’s Row by Abram Hill, (revived in February 1946), Angel Street by Patrick Hamilton (July 1946), Juno and the Paycock by Sean O’Casey (July 1946), You Can’t Take It with You by Moss Hart and George Kaufman (August 1946), The Peacemaker by Kurt Unkelbach (November 1946), Tin Top Valley by Walter Carroll (March 1947), The Later Christopher Bean by Sidney Howard (July 1947), Rope by Eugene O’Neill (July 1947), The Show Off  by George Kelly (August 1947), Rain by John Colton and Clemence Randolph (December 1947), The Washington Years by Nat Sherman (March 1948); Sojourner Truth by Katherine G. Chaplin (April 1949), Almost Faithful by Harry Wagstaff Gribble (June 1948), Riders to the Sea by John Millington Synge, and Freight by Kenneth White (February 1949). The play that brought ANT the most recognition, however, was Anna Lucasta. It opened at The Harlem Library Theatre, but Broadway producers were anxious to move it downtown because of its commercial appeal. The show ran on Broadway for 957 performances before it toured throughout the country and later abroad in London, England. The success of Anna on Broadway had a two-fold effect on the company. It caused the demise of ANT because it departed from the company’s community roots and resulted in the loss of its founder Hill, who resigned due to the shift in goals and ideology.

The last category was a weekly series of radio programs presented from 1945 to 1946, entitled “New World A-Coming”. The format was a weekly half-hour dramatic program. These programs ranged from William Shakespeare’s Romeo and Juliet and Charles Dickens’s Scrooge to Arthur Laurent’s The Face and Paul Lipschutz’s The Last Page. Operatic productions included Pagliacci, H.M.S. Pinafore, Rigoletto, and The Barber of Seville. The company also presented operatic productions on Sunday afternoons on Station WNEW.