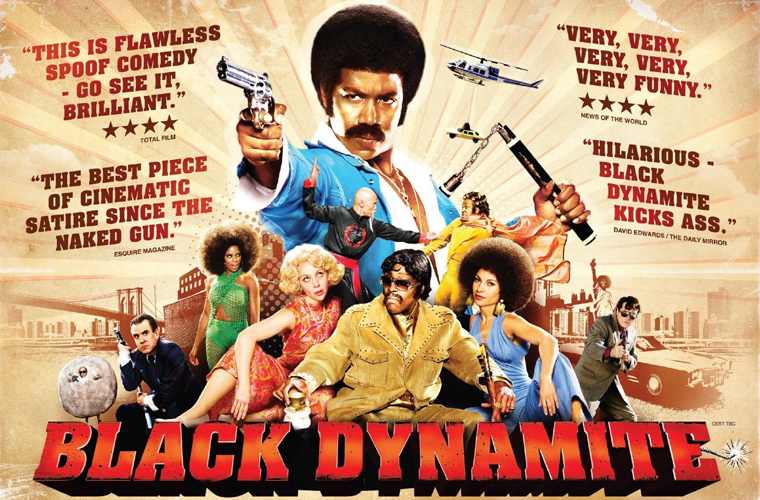 Blaxploitation is a term coined in the early 1970s to refer to black action films that were aimed at black audiences. Featuring African-American actors in lead roles and often having anti-establishment plots, the films were frequently condemned for stereotypical characterization and glorification of violence. Critics of the films saw them as morally bankrupt and as portraying black actors in the most negative way. However, not everyone in the black community agreed as they provided black audiences with cinematic heroes up on the silver screen in a more honest portrayal of urban life unseen in most Hollywood pictures prior to that time.

It is important to note that Blaxploitation arose at a critical juncture for the Hollywood film industry. The 1960s were a turbulent time in American race relations, and the civil rights movement exploded into the national consciousness. As the decade wore on, cries of “Black Power” were heard from the ghettos across America, and it became increasingly difficult for Hollywood studios to ignore black society. While black political activists battled in the courtrooms and the streets for the end of segregation, for voting rights, and for equal rights, black filmmakers and actors began to infiltrate Hollywood.

By the late 1960s, the major Hollywood studios were still reeling from the profound effects of a two-decade-old Justice Department lawsuit that involved their profitable theater monopolies. Combined with the insurgence of television, and the drop in audience popularity for “The Musical” the film industry was losing millions of dollars, forcing many to face the distinct prospect of bankruptcy.

The civil rights movement and some bad luck for Hollywood studios would come together at just the right moment and Blaxploitation would be born.

Shot on a minuscule budget in little more than two weeks, the film and its provocative depiction of a black man fighting the system, and winning, understandably struck a chord with African-American audiences around the country. That the film was “rated X by an all-white jury” only helped the film and by the end of 1971, Sweetback had grossed $10 million, a huge success for the era.

Sweet Sweetback may have been credited with kicking off the genre, but MGM’s release of Shaft, a few months later, probably set a more precise blueprint for all the movies that would follow. Making Shaft was a huge gamble for MGM, a once prestigious studio (Gone With the Wind and The Wizard of Oz) that had fallen on incredibly dire times. Taking a risk, they hired Gordon Parks, who had been the first black mainstream Hollywood director with The Learning Tree (1969) to direct Richard Roundtree in the movie that would ultimately rescue MGM from financial ruin and receive an Oscar for Isaac Hayes’ enduring score. Shaft provided audiences with a sexy, practically omnipotent hero, in the style of a “Black James Bond”, and his precarious balancing act between the white world and the ghetto. Viewers ate it up and the film quickly grossed $12 million.

The success of Sweet Sweetback and Shaft came just as Hollywood fully realized the power of the black ticket-buying public, which accounted for more than thirty percent of the box office in major cities and quickly seized upon the potential profitability of the new formula.

1972 saw the proliferation of Blaxploitation films, most notably the independently produced Super Fly. Directed by Gordon Parks Jr. and aided by the best-selling soundtrack by Curtis Mayfield, Super Fly took living “the life” (a term used to describe an urban existence which revolves around drugs, sex, pimps, gambling and guns) to the extreme by making a cocaine drug dealer (Ron O’Neal) its protagonist and center of focus.

Through 1976, an estimated 200 Blaxploitation feature films were produced with the range of stories as varied as mainstream action films. However, action, gratuitous violence, and guns were the underlying element in all of them and most used a black versus white dichotomy as the defining element. Every available genre was plundered in an attempt to re-hash old movie plots and ideas.

Notwithstanding, the weaknesses of cliché -ridden, and low budget formula movies themselves, the Blaxploitation era did succeed in creating its own stars. Ex-football players like Jim Brown and Fred “The Hammer” Williamson fit the bill perfectly. It wasn’t all macho, misogynistic posturing either. The voluptuous Amazonian figures of Pam Grier and Tamara Dobson led the female charge as a gun-toting’, revenge seeking, super-mamas who flaunted their sexuality with hard-hitting films like Coffy, Foxy Brown and Cleopatra Jones.

The one consistent ingredient underneath it all was the brilliant music, which, whether coming from James Brown, Marvin Gaye, Curtis Mayfield or Isaac Hayes, added an element of depth and sophistication.

Blaxploitation movies proved that black actors possessed a strong box-office appeal and despite many of the films being written, directed, and produced by white Hollywood, black audiences finally saw the recognition African American actors, directors and writers deserved, and fought for, since the early days of silent film.

But, by the mid-1970s a backlash against Blaxploitation began to bloom. The studios received considerable criticism from black pressure groups, including the NAACP, for the negative stereotypes featured in most of the genre’s movies that were eroding the positive role models and reinforcing white prejudices about black culture. Audiences had also tired of the industry’s cheap, endless re-workings of the crime-action-ghetto formula. Within a year production pretty much stopped dead, ironically putting the black actors and technicians who had fought so hard to get into the movie business back out of work. The boom was over and Blaxploitation’s popularity declined as quickly as it rose.

In retrospect, Blaxploitation and the legacy it left behind have been acknowledged as a positive contribution to African American film history. The emergence of young black actors like Eddie Murphy in the early 1980s assisted with the assimilation of black culture into the conventional Hollywood movie. Since then, a succession of black actors and directors (among them Denzel Washington, Samuel L Jackson, Will Smith, Laurence Fishburne, Angela Bassett, Halle Berry, Spike Lee, John Singleton, Bill Duke, Robert Townsend, Mario Van Peebles) have succeeded in establishing themselves as big box-office draws, confirming that the achievements of their antecedents like Fred Williamson, Richard Roundtree, and Pam Grier were not in vain.