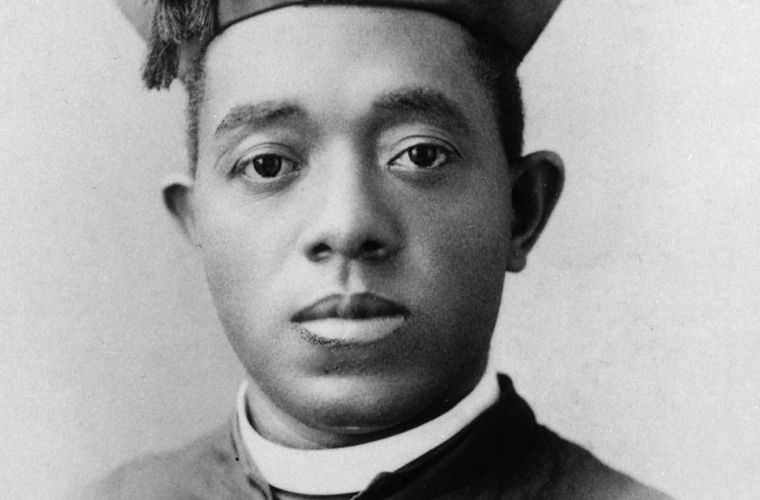 Tolton was born into slavery. His parents, Peter Paul and Martha Jane (née Chisley) Tolton, were baptized Catholics who had been granted permission to wed by the neighboring Catholic families who owned them. At the outbreak of the American Civil War, Tolton’s father escaped slavery to join the Union army and was subsequently killed in battle. Soon after Peter Paul’s escape, Tolton’s mother fled with her three children at night and, aided by a handful of Union soldiers, crossed the Mississippi River to Illinois. They soon settled in the town of Quincy, where they joined a Catholic church whose congregation was largely constituted by German immigrants.

Tolton was encouraged by his mother to pursue an education. When he attempted to enter local schools, however, he faced harassment and discrimination by classmates and their parents, and his education in both public and private schools was limited. Discussions with his pastor, Father Peter McGirr, inspired Tolton to consider entering the priesthood, yet no American seminary would admit a black student. Tolton was therefore tutored privately by local priests until St. Francis Solanus College (now Quincy University) admitted him in 1878 as a special student. In 1880, with the support of McGirr and other priests in Quincy, Tolton began to study for the priesthood at the Urban College of the Sacred Congregation de Propaganda Fide in Rome. After six years of study, Tolton was ordained a priest on April 24, 1886.

Although there had been speculation that he would be sent on a mission to Africa, Tolton was assigned to the United States. He returned to the United States in July 1886, delivering his first mass at St. Benedict the Moor, a largely black church in New York City, before returning to his hometown of Quincy as pastor at the mainly black St. Joseph Church. In Quincy Tolton became such a popular preacher that he attracted some members of local white—mostly German or Irish—congregations; he therefore also faced discrimination from other local priests, who resented what they perceived as competition.

The St. Augustine Society, an African American Catholic charitable organization, contacted Tolton about moving to Chicago to help its members found a congregation. In late 1889 Rome granted Tolton a transfer to Chicago, where he not only became the city’s first African American priest but also was granted jurisdiction by the archbishop over all of Chicago’s black Catholics. In the beginning, he ministered to a black congregation that met in the basement of Old St. Mary’s Church. Through the combined efforts of Tolton and the St. Augustine Society, as well as a private gift, enough money was raised to build most of the structure for a church building, and in 1893 Tolton held mass in the new St. Monica Church on Chicago’s South Side. Tolton soon developed a national reputation as a minister and as a public speaker, yet he devoted the majority of the remainder of his life to his congregants, most of whom lived in poverty, and to the completion of St. Monica Church. He died shortly after succumbing to heatstroke.