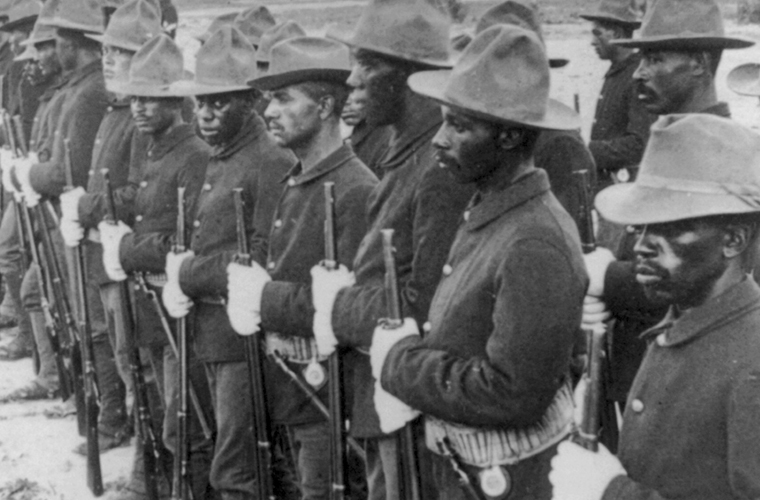 Buffalo soldier, a nickname given to members of African American cavalry regiments of the U.S. Army who served in the western United States from 1867 to 1896, mainly fighting Indians on the frontier. The nickname was given by the Indians, but its significance is uncertain. 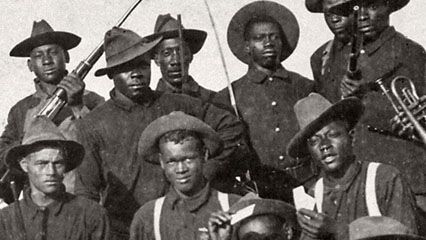 An 1866 law authorized the U.S. Army to form cavalry and infantry regiments of black men; the resulting units were the 9th and 10th cavalries and the 38th through 41st infantries (these four were later reduced to the 24th and 25th infantries, which often fought alongside the cavalry regiments). The law required their officers to be white.

The 10th Cavalry, originally headquartered at Fort Leavenworth, Kansas, was commanded by Colonel Benjamin Grierson; his men were provided with aged horses, deteriorating equipment, and inadequate supplies of ammunition. Their duties included escorting stagecoaches, trains, and work parties and policing cattle rustlers and illegal traders who sold guns and liquor to the Indians, but their principal mission was to control the Indians of the Plains and Southwest. After the Red River Indian War (1874–75) the 10th Cavalry was transferred to Texas, where the 9th Cavalry, commanded by Colonel Edward Hatch, had long been based. 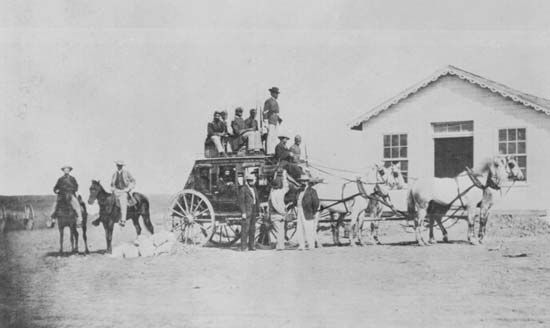 The combined forces fought outlaws and Indians who often conducted raids and robberies from sanctuaries in Mexico. They carried out a campaign against the Apache, who were resisting relocation and confinement on reservations. After numerous battles with Victorio and his Apache band, the soldiers managed to subdue them in 1880. While the 10th Cavalry continued in action against the remaining Apache for another decade, the 9th was sent to Indian Territory (later Oklahoma) to deal with whites who were illegally settling on Indian lands. In 1892–96, after Grierson’s retirement, the 10th Cavalry relocated to Montana Territory with orders to round up and deport the Cree Indians to Canada. 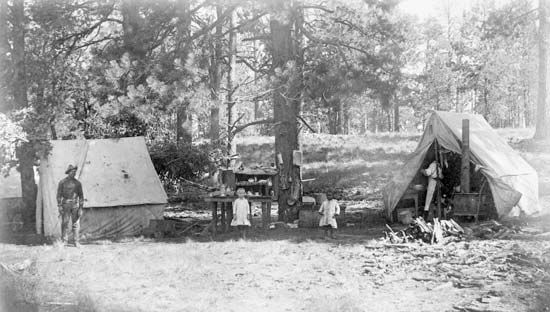 The buffalo soldiers were noted for their courage and discipline. Drunkenness, an especially widespread problem in the army, was rare among them; in a period when nearly a third of white army enlistees deserted, the black soldiers had the U.S. Army’s lowest desertion and court-martial rates. In nearly 30 years of frontier service, buffalo soldiers took part in almost 200 major and minor engagements. From 1870 to 1890, 14 buffalo soldiers were awarded medals of honor, the army’s highest award for bravery. The 9th and 10th cavalries later distinguished themselves by their fighting in the Spanish-American War and in the 1916 Mexican campaign. One of the 10th Cavalry’s officers was John J. Pershing, whose nickname Black Jack reflected his advocacy of black troops. 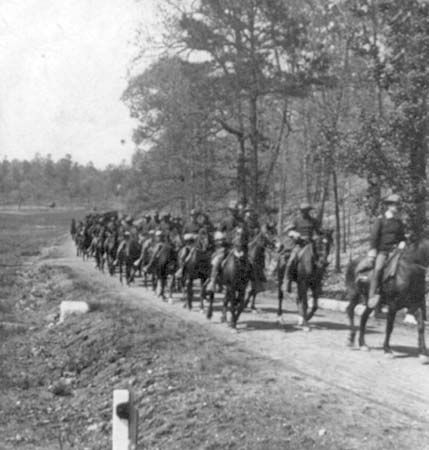