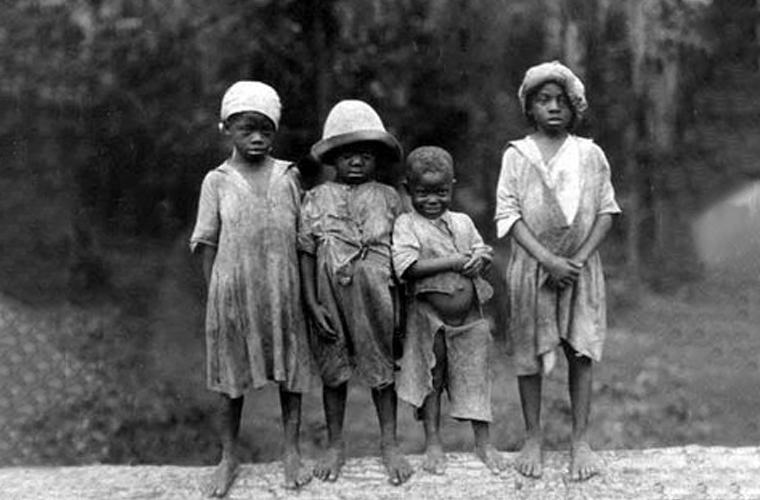 Slaves were not supplied with a lot of clothing. They were barely supplied with one item that was decent enough to wear. If slaves were hired out, they usually received more clothing at this time; two suits, one pair of shoes, and one blanket. However, this was not a general rule; it could vary from plantation to plantation. On many plantations, it was common for children under 10 or 12-years-old to go naked. Boys transitioned to breeches, or short pants, and then to long pants. Girls later wore adult dresses when they began to menstruate. Plain leather shoes and sometimes hats were also included in allotments.

The material of the clothing was coarse and far from being comfortable and warm. Shoes that were given to the slaves usually last only a few weeks. Slaves were required to keep their own clothes clean. If slaves washed their clothing items it was after working all day in the field, and then they were required to wash the clothing at a stream. Afterward, they would build a fire and dry them; and in some instances, slaves wore their clothes until they were worn off, without washing.

On some plantations, slaves were allowed to make baskets, brooms, and other items to sell. They could sell the items to buy Sunday suits. Plantation slave owners did not give slaves mittens or stockings. By the nineteenth century, and with the rise of cotton production, materials such as jean cloth became more common and allowed owners to provide slaves clothing that was untailored and ready-made. The most common practice was to distribute clothes in twice-a-year allotments.

Many slave women continued the West African tradition of donning head wraps—often brightly colored textiles that were wrapped repeatedly and completely around the head, covering the hair, and secured with techniques involving knots or tuckings. Men, children, and babies also wore head wraps at times.