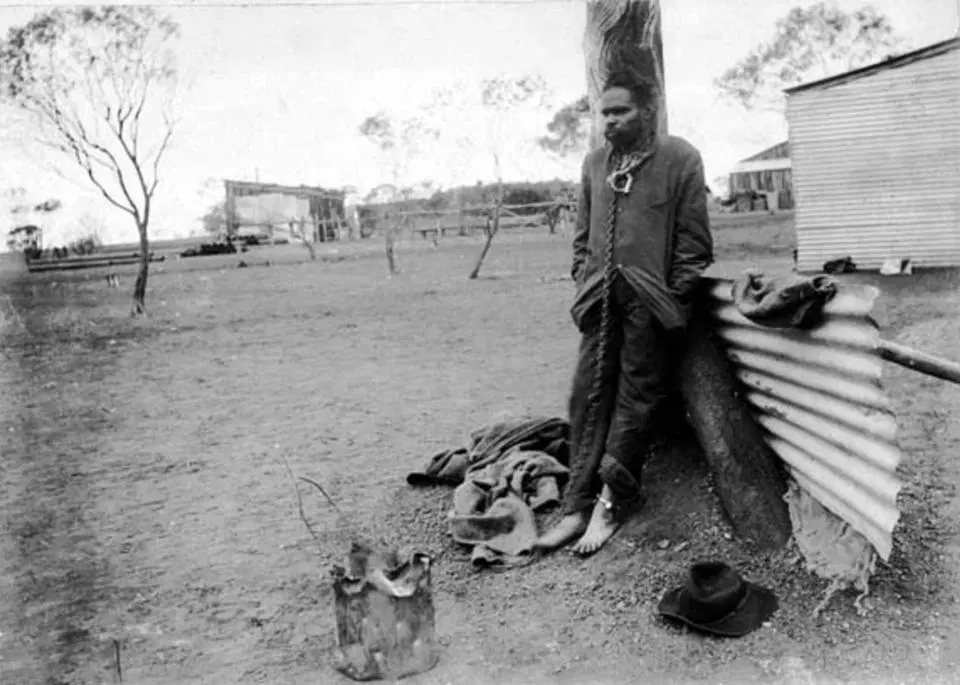 HAUNTING photographs reveal the disturbing abuse of aboriginal people less than a century ago — a reminder of the dark past of oppression they suffered at the hands of the white population.

Indigenous Australian men and boys are cruelly shackled together with heavy neck chains on the way to stifling jails and back-breaking work parties.

The pictures were taken in the 19th and early 20th century when incarceration was used as a tool to weaken the aboriginal people in Australia.

They were often arrested for petty crimes such as stealing cattle and police were paid more for each indigenous prisoner they brought in.

Neck chains and other restraints were a common form of punishment for indigenous Australians at the turn of the 20th century.

Aboriginal prisoners remained chained from their arrival in the jails – except in times of sickness – for years at a time.

Prisoners shackled by the neck were also forced to work on the roads and railways for up to eight hours a day.

It was not until the 1940s that the use of neck chains on Aboriginal prisoners was phased out.

They were still used informally in some areas until the 1960s.

The shocking pictures emerged today on the tenth anniversary of the adoption of the United Nations Declaration on the Rights of Indigenous Peoples.

The landmark international agreement was intended to tackle the discrimination and human rights violations against the 370 million indigenous people living in more than 70 countries.

It was adopted by the General Assembly on September 13, 2007, with 144 countries voting in favor.

The four nations that voted against it were Australia, Canada, New Zealand, and the United States. Eleven countries abstained.

Last year Canada officially removed its objector status to UNDRIP, and the other three objectors have, to various degrees, changed their position.

The declaration is not legally binding but the UN believes it reflects the commitments of member states to eliminate human rights violations against indigenous people.