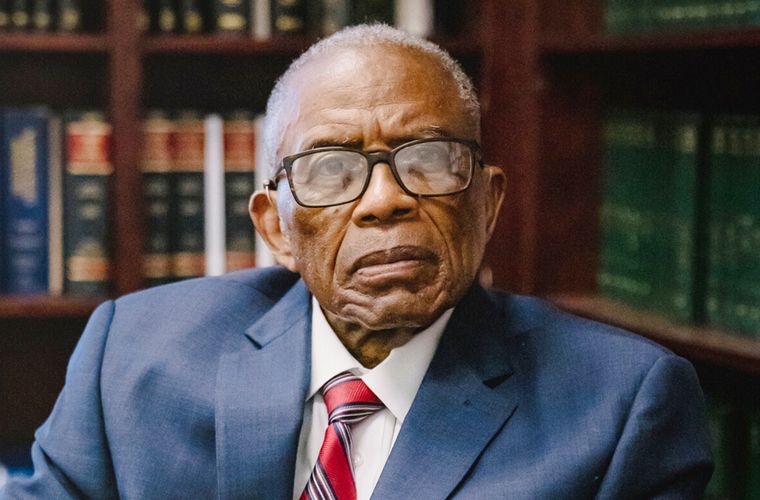 Enthusiastic, energetic, and out of law school for less than a year, he began a dynamic civil rights career in 1954. His first civil rights case was a representation of Claudette Colvin, a 15-year-old African American high school student who refused to give up her seat on a city bus in Montgomery, Alabama, in March 1955. In December 1955 he represented Mrs. Rosa Parks who was arrested because she refused to give up her seat on a bus to a white man, igniting the Montgomery Bus Boycott, City of Montgomery v. Rosa Parks. He was Dr. Martin Luther King, Jr.’s first civil rights attorney.

As an author, Gray wrote Bus Ride to Justice first released in 1995, Revised Edition released in 2013, was previewed at the Jimmy Carter Center and broadcast on C-Span Book TV. Upon receipt of a copy, President Barack Obama wrote in a letter to Gray, “Today, we stand on the shoulders of giants who helped move us toward a more perfect Union, and I appreciate your sharing your story.” The Tuskegee Syphilis Study was released in May 1998. He also wrote The Sullivan Case: A Direct Product of the Civil Rights Movement, a review for Case Western Reserve Law Review.

In 1997 Gray encouraged the President of the United States to make an official apology to the participants of the Tuskegee Syphilis Study. The participants also requested a memorial in their honor. The apology was made at the White House in May of that year. Gray was the moving force in the establishment of the Tuskegee Human and Civil Rights Multicultural Center, Tuskegee, Alabama. A 501(c)3 Corporation, it serves as a memorial to the Study participants and educates the public on contributions in the field of human and civil rights by Native Americans, Americans of African s of European descent. It also strives to educate on the role Tuskegee-Macon County played in the Civil Rights Movement.

Gray filed suits that integrated all state institutions of higher learning in the State of Alabama, and 104 of the then 121 elementary and secondary school systems in the state, Lee v. Macon. He was counsel in preserving and protecting the rights of persons involved in the infamous Tuskegee Syphilis Study in 1972, the case of Pollard v. the United States of America. In July of 1993, he argued on behalf of Alabama State University, in the higher education case, John F. Knight, Jr. v. the State of Alabama, et. al., U.S. District Court for the Eleventh Circuit. The court held in that case that there are still vestiges of racial discrimination in higher education in Alabama.

The list of civil rights cases that Mr. Gray won can be found in most constitutional law textbooks. Among them are included:

Williams v. Wallace, decided in 1965, was a class action suit brought by African Americans against Governor Wallace and the State of Alabama and resulted in the court ordering Governor Wallace and the State of Alabama to protect marchers as they walked from Selma to Montgomery, Alabama to present grievances as a result of being unable to vote. The publicity of these actions led to the enactment of the Voting Rights Act of 1965.

Mitchell v. Johnson, decided in 1966, was one of the first civil actions brought to remedy the systematic exclusion of blacks from jury service.

Gray has lectured on local, state, national, and international levels. He was Practitioner-In-Residence at Pepperdine University; lecturer at Case Western Reserve University, School of Law; Tenneco Distinguished Speaker, University of Houston; guest lecturer for the Harvard Law Forum Speaker Series, Harvard Law School, and facilitator for the Federal Executive Institute, Charlottesville, Virginia, and the University of Hull, United Kingdom. In 2000, Gray was appointed to the Charles Hamilton Houston Chair in Law at The North Carolina Central University School of Law.

One of the first African Americans to serve in the Alabama Legislature since reconstruction, he served from 1970-1974. He received the Capitol Press Corps Award for Best Orator in the House of Representatives in 1972 and was a member of the National Society of State Legislators from 1970-1974. His love and commitment to promoting the works of the National Bar Association gave him recognition as its 43rd President, 1985-86. He initiated the NBA Hall of Fame (becoming an inductee in August of 1995) and was the recipient of the Charles Hamilton Houston Medallion of Merit from the Washington Bar Association.

The recipient of numerous awards and honors, Miller Brewing Company selected him to appear in its 1989 calendar, Gallery of Greats, Black Attorneys: Counsels For The Cause. He was further recognized by Miller Brewing Company as the representative of all lawyers in the 1993 tenth edition, “Excellence Has Many Faces”. Miller has again recognized Mr. Gray in its 2000 Gallery of Greats Calendar, Pillars of the Past: Architects of the Future, as one of the three Black Attorneys: Counsels for the Cause.

Case Western Reserve University named Gray the Fletcher Reed Andrews Graduate of the Year in 1985 elected him to the Society of Benchers in 1986 and presented him the highest honor the law school bestows on one of its graduates, the Law School Centennial Medal, in September 1993. In 1996, the American Bar Association bestowed upon Mr. Gray its “Spirit of Excellence Award”, which celebrates the achievements of lawyers of color and their contributions to the legal profession. It also recognizes its commitment to paving the way to success for other lawyers of color and commemorates the rich diversity that lawyers of color bring to the legal profession and to society.

In 2003, Gray was awarded the Soaring Eagles Award from the Minority Caucus of the Association of Trial Lawyers of America, which symbolizes the struggle of lawyers of color as they pursue personal and professional excellence and success. In 2004, he was the recipient of Harvard University Law School’s highest award, the Charles Hamilton Houston Medallion as well as the recipient of the American Bar Association’s Thurgood Marshall Award, and in October the Sarah T. Hughes Civil Rights Award given by the Federal Bar Association. In 2005 he was inducted into the Alabama Academy of Honor.

He is the 2009 recipient of the American Association for Justice, Leonard E. Weinglass in Defense of Civil Liberties Award; and the National Bar Association, Vince Monroe Townsend, Jr. Legends Award. From the City of Montgomery in 2013, he was awarded the “Gifts of Giants Award”, in Celebration of Montgomery Bus Boycott Civil Rights Legends; Commendation by Alabama Governor Robert Bentley (2014); NBA Resolution naming the annual “Fred D. Gray Hall of Fame Award Luncheon”.

Gray is the first person of color elected as President of the Alabama State Bar Association and served as its 126th President for the year 2002-2003. As president, he was instrumental in the Board of Bar Commissioners initiating the Alabama Lawyers Hall of Fame. Inductions are now held annually.

An Alabama State University (ASU) graduate, Class of 1951, Gray has made substantial contributions to his alma mater. He was the first President of the National Alumni Association of ASU when it was reorganized in approximately 1964 and the first person of color to serve as General Counsel for Alabama State University. He was inducted into the National Black College Alumni Hall of Fame in 2003.

Under the ASU Trust for Excellence, he established an endowment trust in the name of his late wife, Bernice H. Gray, a 1956 graduate of ASU. He is a member of Omega Psi Phi Fraternity and Sigma Pi Phi Fraternity. An elder of the Tuskegee Church of Christ, Gray is married to Carol Porter of Cleveland, Ohio. He is the father of four, grandfather of six, and stepfather of three.