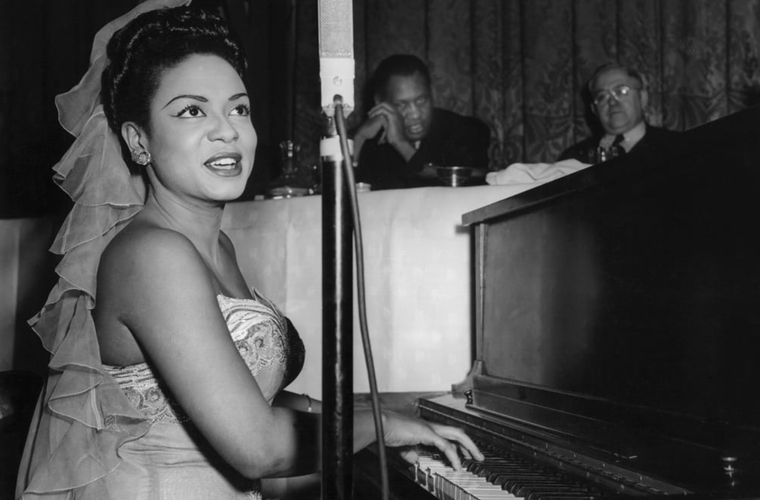 Hazel Scott was born in Port of Spain, Trinidad, and Tobago, on June 11, 1920. Her family was of African descent but was strongly shaped by British education; her father, R. Thomas Scott, was an English professor trained in Britain, and her mother, Alma Long Scott, was a skilled classical pianist. Hazel, who had perfect pitch, started playing the piano as a toddler. “One day my grandmother … was singing a tune, and I kept asking her to sing it again,” she recalled in an interview appearing in Arthur Taylor’s Notes and Tones: Musician-to-Musician Interviews. “Finally I knew I could play it. I remember the instant when I realized I could play. I was two and a half!” After the family moved to New York in 1924, settling in the African-American mecca of Harlem, Alma Scott sought out formal piano instruction for her talented daughter.

At age eight Hazel applied to study at the prestigious Julliard School of Music. Even though she was turned down because she was too young, she managed to attract the attention of a professor there, Paul Wagner, who said, according to the New York Times, “I am in the presence of a genius,” and agreed to give her lessons himself. Scott made her formal debut on November 24, 1933, in a classical recital in New York. By that time, she was comfortable being in front of an audience, because she held smaller performances when she lived in Trinidad and Tobago.

Scott’s father’s death the following year led to the addition of jazz to her musical repertoire. Her mother, who considered both vocalist Billie Holiday and pianist Teddy Wilson as friends, took a job performing on saxophone with an all-female band, the Harlem Harli- cans, headed by Lillian Hardin Armstrong (wife of Louis Armstrong), and soon she formed a similar band of her own called the American Creolians. Scott was soon pressed into service playing the piano and trumpet, and her talents were noticed as the band made the rounds in the dance halls of New York and in other cities. In 1936 Scott performed on radio’s Mutual Broadcasting System network and took a step up in the jazz world, appearing with the Count Basie Orchestra at the Roseland Dance Hall on Broadway in New York.

By that time, the solo piano style that became Scott’s trademark had begun to appear. Her shows often featured jazz treatments of classical music—something that was more common during the earlier eras of jazz than it would be in the modern era. She would begin with a virtuoso classical piano piece, typically by Franz Liszt or Sergei Rachmaninoff, playing it unaltered at first and then beginning to improvise. Scott’s grounding in classical technique gave her the ability to play extremely rapidly. Even though she was never at the forefront of jazz improvisation techniques, she easily mastered difficult piano styles such as boogie-woogie when they appeared, and she admired the work of the greatest jazz piano virtuoso of all: Art Tatum.

Scott also sang, with Billie Holiday as a strong influence, and her combination of vocal and keyboard skills enabled her not only to make the leap to the stage and then the movie screen, but also to avoid the demeaning maid roles to which African-American female performers were often restricted at the time. She made her Broadway debut in the musical Sing Out the News in 1939 (also appearing at the New York World’s Fair that year), after which she landed an ongoing gig at the swanky New York club Café Society. In the early 1940s, she moved to Hollywood. Scott appeared in films such as I Dood It, Something to Shout About, The Heat’s On, and Broadway Rhythm. In Rhapsody in Blue, a film biography of songwriter George Gershwin, she sang Gershwin’s “The Man I Love” in English and in impeccable French.

In 1945 Scott married U.S. Representative Adam Clayton Powell Jr., becoming, in the words of historian Donald Bogle in Primetime Blues: African Americans on Network Television, “half of a new kind of Negro couple: educated, cultured, political, outspoken; a modern woman who didn’t brook fools easily.” The marriage lasted until 1960 and produced a son, Adam Clayton Powell III. Scott made no compromises with prevailing racial restrictions; for example, she refused to perform for segregated audiences in the South. She also attempted to perform at Constitution Hall in Washington, D.C. but was unsuccessful: Despite the breaking of the color barrier thereby operatic soprano Marian Anderson in 1939, the hall was still not consistently open to African-American performers. 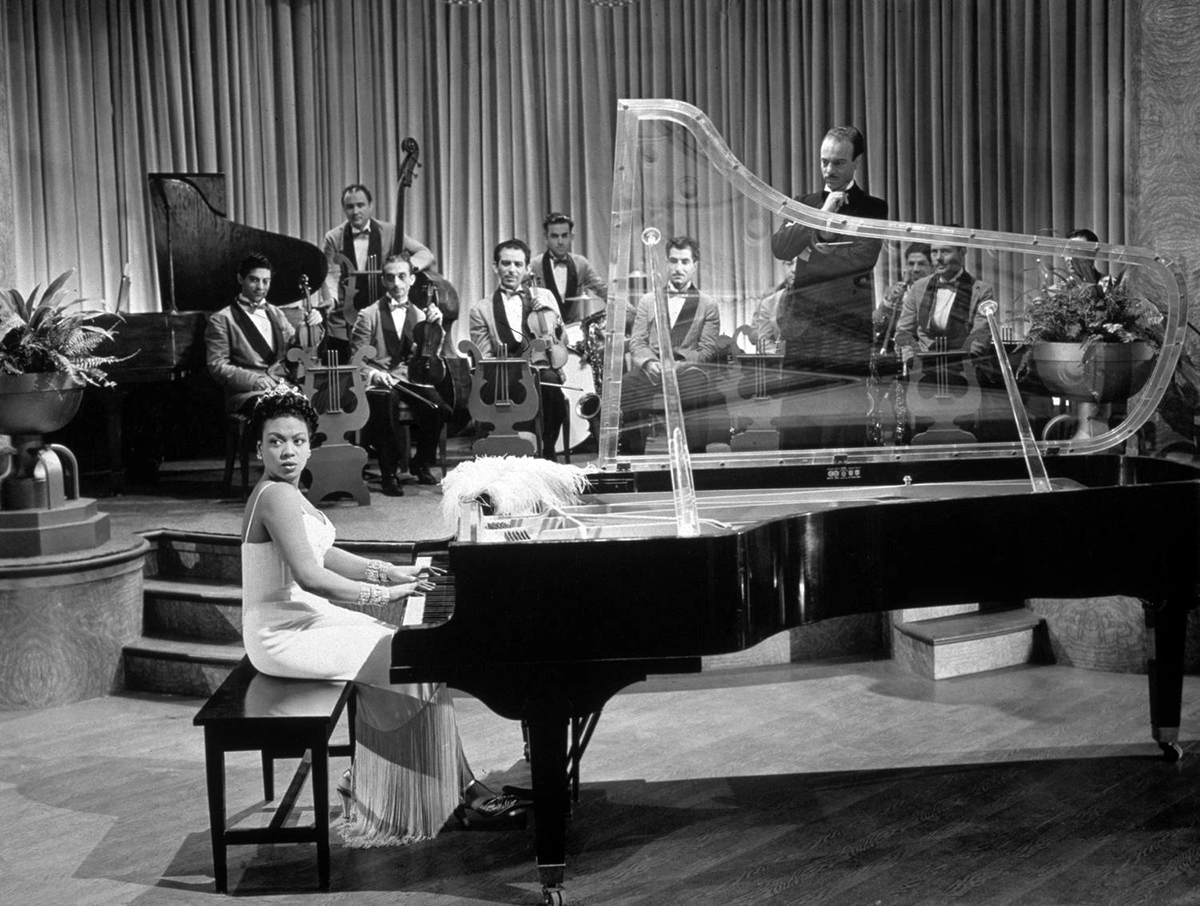 Scott took some time off following the birth of her son in 1946. When she was ready to return to performing, she seemed natural for the new medium of television with her multiple abilities, onscreen confidence, and classy image. In the spring of 1950, The Hazel Scott Show made its debut on the DuMont Television Network. The show wrote Bogle, “opened with the camera panning across an urban skyline, then revealing a set that was supposedly a room off the terrace of a posh penthouse. There sat the shimmering Scott at her piano, like an empress on her throne, presenting at every turn a vision of a woman of experience and sophistication.” Positive reviews came in, and Scott seemed on her way to a yet higher level of national renown.

Awards: Inducted into the Black Filmmakers Hall of Fame, 1978.

However, in June of 1950, she was named as a possible Communist sympathizer in the widely circulated pamphlet Red Channels, which was issued by the conservative periodical Counterattack. Scott defended herself, volunteering to appear before the U.S. House Un-American Activities Committee and stating that she was not a member of the Communist Party and (as quoted by Bogle) “have never entertained the idea of being one, and I never will.” She also charged Red Channels with promoting “guilt by listing” and called the publication “vile and un-American.”

Regardless, the damage was done. Major sponsors pulled their ads from her show, which was canceled in the fall of 1950. She issued several albums in the early 1950s but saw only modest success. Like many other performers who suffered during what became known as the blacklist era, Scott left the country for a time and settled in France with her son in 1957. She appeared in the French film Le Désordre et la nuit the following year. After her divorce from Powell in 1960, she was briefly married to Swiss comedian Ezio Bedin.

Scott returned to the United States in 1967 and was able to resume her television career, appearing on the African-American-oriented comedy series Julia, among other programs. She was a consistent fixture during the 1970s in New York clubs oriented toward older styles of jazz, and in 1972 she recorded the album Hazel Scott Live at the St. Regis Hotel. She was inducted into the Black Filmmakers Hall of Fame in 1978. Diagnosed with pancreatic cancer, Scott continued to perform almost until her death on October 2, 1981.