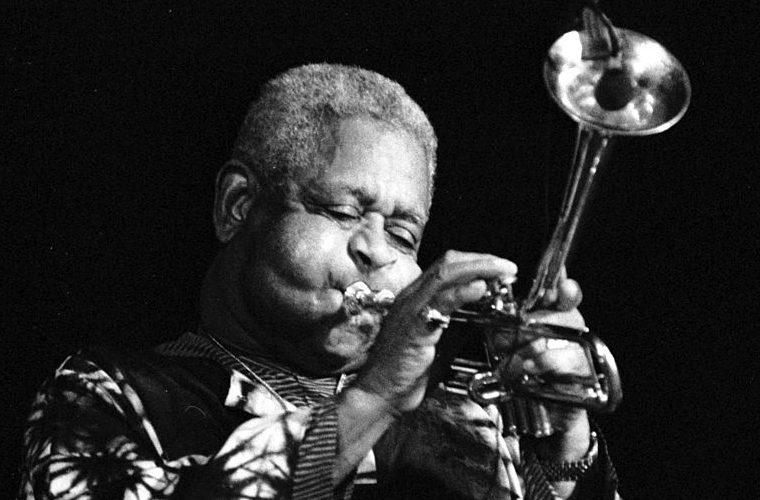 Gillespie’s father was a bricklayer and amateur bandleader who introduced his son to the basics of several instruments. After his father died in 1927, Gillespie taught himself the trumpet and trombone; for two years he attended the Laurinburg Institute in North Carolina, where he played in the band and took music classes. His first professional job was in Frankie Fairfax’s band in Philadelphia; his early style showed the strong influences of his idol, trumpeter Roy Eldridge. Gillespie’s penchant for clowning and capriciousness earned him the nickname Dizzy. In 1937 he was hired for Eldridge’s former position in the Teddy Hill Orchestra and made his recording debut on Hill’s version of “King Porter Stomp.”

In the late 1930s and early ’40s, Gillespie played in a number of bands, including those led by Cab Calloway, Ella Fitzgerald, Earl Hines, Duke Ellington, and Billy Eckstine. He also took part in many late-night jam sessions at Minton’s Playhouse, a New York City nightclub, and was among the club’s regulars who pioneered the bebop sound and style (others included Charlie Parker, Charlie Christian, Thelonious Monk, and Max Roach). In 1944 the first bebop recording session included Gillespie’s “Woody ’n’ You” and featured Gillespie and Coleman Hawkins. Ultimately, Charlie Parker and Gillespie were regarded as cofounders of the bebop movement; the two worked together in several small groups in the 1940s and early ’50s. Although Parker was easily irritated by Gillespie’s onstage antics, their musical relationship seemed to benefit from their personal friction and their competitive solos were inventive, even inspired.

Gillespie formed his own orchestra in the late 1940s, and it was considered to be one of the finest large jazz ensembles. Noted for complex arrangements and instrumental virtuosity, its repertoire was divided between the bop approach—from such arrangers as Tadd Dameron, John Lewis, George Russell, and Gillespie himself—and Afro-Cuban jazz (or, as Gillespie called it, “Cubop”)—in such numbers as “Manteca,” “Cubano Be,” and “Cubano Bop,” featuring conga drummer Chano Pozo. Gillespie formed other bands sporadically throughout the remainder of his career, but he played mostly in small groups from the 1950s onward.

To many, Gillespie ranks as the greatest jazz trumpeter of all time, with the possible exception of Louis Armstrong. He took the saxophone-influenced lines of Roy Eldridge and executed them faster, with greater ease and harmonic daring, playing his jagged melodies with abandon, reaching into the highest registers of the trumpet range, and improvising into precarious situations from which he seemed always to extricate himself. Gillespie helped popularize the interval of the augmented eleventh (flat fifth) as a characteristic sound in modern jazz, and he used certain stock phrases in his improvisations that became clichés when two generations of jazz musicians incorporated them into their own solos.

His late 1940s look—beret, horn-rim glasses, and goatee—became the unofficial “bebop uniform” and a precursor to the beatnik styles of the 1950s. Other personal trademarks included his bent-bell trumpet and his enormous puffy cheeks that ballooned when playing. Gillespie was also a noted composer whose songbook is a list of bebop’s greatest hits; “Salt Peanuts,” “Woody ’n’ You,” “Con Alma,” “Groovin’ High,” “Blue ’n’ Boogie,” and “A Night in Tunisia” all became jazz standards.

Although his most innovative period was over by the end of the 1950s, Gillespie continued to perform at the highest level. During the 1970s he made several big bands, small-group, and duet recordings (with such players as Oscar Peterson and Count Basie) that rank among his best work. As an active musical ambassador, Gillespie led several overseas tours sponsored by the U.S. State Department and traveled the world extensively, sharing his knowledge with younger players. During his last few years, he was the leader of the United Nations Orchestra, which featured such Gillespie protégés as Paquito D’Rivera and Arturo Sandoval. Gillespie’s memoirs, To Be, or Not…to Bop, were published in 1979.