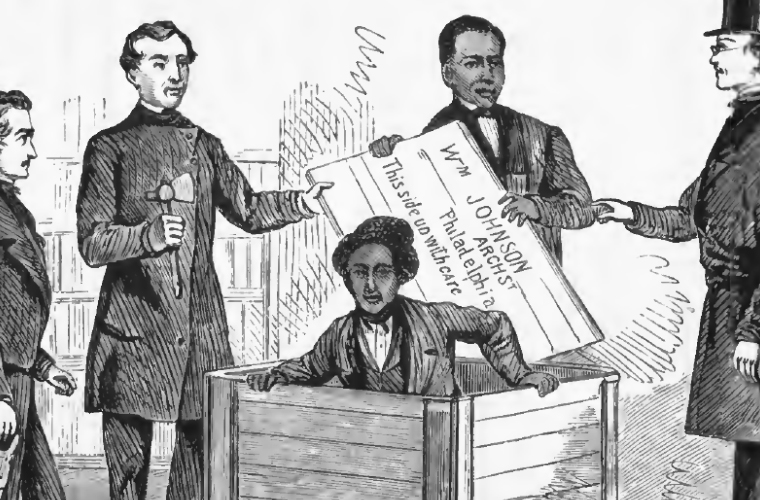 Henry Brown was a Virginia slave who worked on a tobacco plantation. In 1848, his world turned upside down when he heard the news that his pregnant wife and three children were being sold to a slave owner in North Carolina. Determined to reunite with them, he first sought to gain his own freedom. With the help of two men named Smith (no relation), he was boxed up and shipped via a private shipping company called Adams Express Company. His destination: the Philadelphia Anti-Slavery Society, where abolitionists were waiting to receive him.

On March 23, 1849, armed with his Christian faith and a small container of water and a few biscuits, he curled up into a wooden box that was 3 feet long x 2 feet 8 inches deep x 2 feet wide. With only a small hole to breathe through, Brown stayed cramped up in that box for 27 hours until he got to his final destination. When the abolitionists opened the box, a sweat-drenched Brown jumped out and exclaimed: “How do you do, Gentlemen?” With gratitude in his heart, he proceeded to sing a psalm and it was there that the abolitionists coined him Henry “Box” Brown.

Brown’s unthinkable journey to freedom was too irresistible to keep secret. Although various freedom fighters, including Frederick Douglass, tried to persuade Brown not to reveal his method of escape (so that other slave could follow suit), Brown saw an opportunity for himself and cashed in. With the help of friends, he eventually wrote two autobiographies and performed as an actor in Boston, retelling his amazing story, through antislavery panorama plays.

But once the Fugitive Slave Act was passed on August 30, 1850, Brown feared he’d lose his freedom all over again and be reinstated as a slave in Virginia. Not only that, but various abolitionists were embarrassed and upset that Brown didn’t purchase his family in North Carolina when he had an opportunity to do so. Considering these circumstances, Brown fled to England and performed there for the next 25 years. It was there he met his new wife and had a daughter and eventually became a magician, incorporating his family into his act. The last whereabouts of Brown and his new family was recorded in Ontario, Canada, where they performed a show on February 26, 1889. Some sources believe he died there in June 1897.

What makes Henry “Box” Brown’s story so interesting is not just the remarkable fact he shipped himself to freedom through a wooden box, but that he was also a man of dubious character. Brown turned away from his enslaved past — including his family — in order to carve out a completely new identity, using his imagination, creativity, and ingenuity to survive. His choices make for a very realistic, unsettling narrative that paints a picture of how desperate a human can be for freedom — of all kinds.