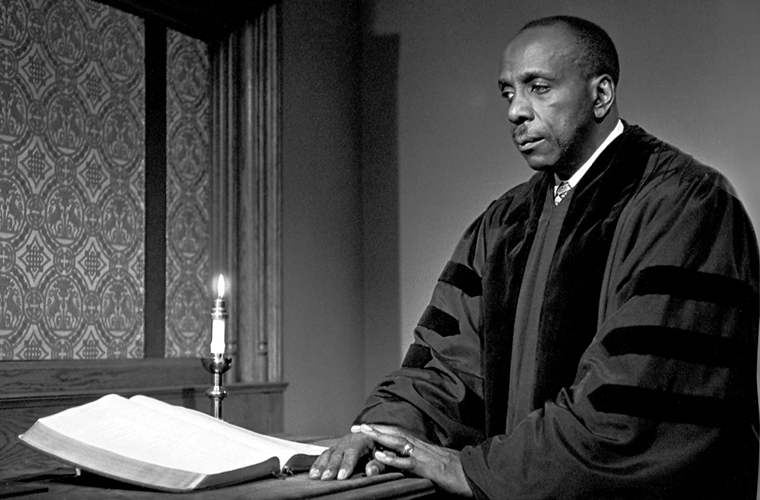 Thurman was the grandson of former slaves who stressed education as a means of overcoming racial discrimination. He graduated as valedictorian from Morehouse College, a predominantly black school, with a Bachelor of Arts in economics in 1923 and from Rochester Theological Seminary (now Colgate Rochester Crozer Divinity School) with a Bachelor of Divinity in 1926. He subsequently served as pastor of a Baptist church in Oberlin, Ohio, and pursued graduate course work in theology at Oberlin College.

In January 1929 Thurman resigned his pastorate in order to pursue a semester of directed graduate study at Haverford College. Studying with the Quaker theologian Rufus M. Jones, Thurman absorbed a deep sense of the need to cultivate one’s interior life—i.e., one’s personal relationship with God. That fall Thurman returned to Morehouse as a professor. In 1932 he became dean of Rankin Chapel at the prestigious and primarily black Howard University. A meeting in 1934 with Mohandas K. Gandhi instilled within Thurman an appreciation for the value of nonviolent resistance in combating racial inequality. He subsequently wed nonviolence and the appreciation he had gained from Jones for the inward personal relationship with God with a deeply religious sense of protest against institutionalized race-based segregation.

In 1944 he left Howard to help found the Church for the Fellowship of All Peoples (also known as Fellowship Church) in San Francisco, the first congregation in the United States that encouraged participation in its spiritual life regardless of religious or ethnic background. Thurman stayed there until 1953 when he assumed the deanship of Boston University’s Marsh Chapel. In his sermons and in his classes, he inspired Martin Luther King, Jr., and other students committed to social justice who would participate in the civil rights movement. He gained a broader following as a prolific author and the host of a popular Sunday morning television show.

Thurman retired from the university in 1965. He founded and directed the Howard Thurman Educational Trust, which provided funding for college students in need, and remained a prolific writer and a popular speaker until his death. Among his many books are Deep River (1945), Jesus and the Disinherited (1949), Meditations of the Heart (1953), The Creative Encounter (1954), The Inward Journey (1961), Disciplines of the Spirit (1963), and With Head and Heart: The Autobiography of Howard Thurman (1979).