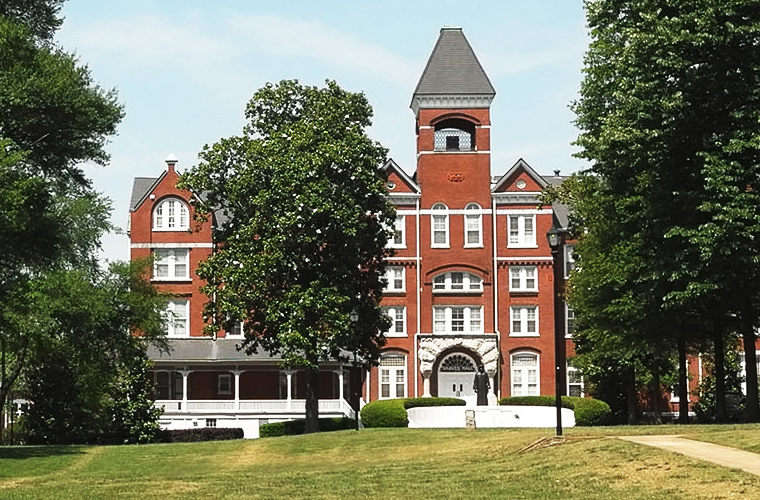 Morehouse College is one of ten historically Black colleges and universities in Georgia. Located a few miles from downtown Atlanta in the historic West End district, Morehouse is one of only five all-male colleges in the United States and the only one for African Americans.

Founded after the Civil War (1861-65) as a school for the training of preachers, Morehouse has become one of the most prestigious colleges for African Americans in the nation. In fall 2017 enrollment was approximately 2,200.

Augusta Institute
The college began as Augusta Institute, founded during Reconstruction in 1867 by William J. White and Richard C. Coulter, a former freedman. Located in Augusta, the school received support and sponsorship from the American Baptist Home Mission Society, an organization involved in the development of several colleges for Blacks during the nineteenth century. The first few years proved difficult for the school. Financial troubles plagued the institute and forced its temporary closure on several occasions. It also encountered trouble from the white population of Augusta. One of the school’s early leaders, the Reverend W. D. Siegfried, was forced out of the community after it became known that he had written a letter to a northern newspaper criticizing the treatment of Blacks by whites in the city.

In 1871, under the leadership of Joseph T. Robert, Augusta Institute began a period of stability. Still, the school’s location in Augusta hampered recruiting and fund-raising efforts, and in 1879 the institute relocated to Atlanta, the center of Black higher education in the South. The school became the Atlanta Baptist Seminary. The new Atlanta location at Elliott and West Hunter streets soon proved challenging; the site was adjacent to a railroad yard and a lumber mill, and the noise and smoke made teaching all but impossible. In 1885 the school moved to Atlanta’s West End neighborhood. The campus encompassed fourteen acres and contained remnants of the defensive positions occupied by Confederate soldiers during the Civil War.

Atlanta Baptist College
In 1897 the institution again changed its name, to the Atlanta Baptist College, and granted its first baccalaureate degrees. The school entered into a period of excellence and began to acquire the atmosphere of a true college, as numerous student organizations and athletic teams were founded. In 1906 John Hope assumed the presidency, becoming the first Black president of a college supported and controlled by white northerners. A native of Augusta, Hope was a graduate of Brown University in Rhode Island and had been a professor at Atlanta Baptist College since 1898. During his tenure, the college expanded its course offerings, increased the number of facilities, and earned a reputation for academic excellence.

Despite Hope’s success at fund-raising, the school struggled financially during the 1930s. Although other schools also experienced difficulties during the Great Depression, the situation became so critical at Morehouse that the Atlanta University Board of Trustees placed responsibility for Morehouse’s finances in the hands of administrators at Atlanta University and Spelman College. Morehouse experienced little growth in enrollment numbers but did manage, in large measure, to maintain the high academic standards implemented during Hope’s administration.

Benjamin Mays
Morehouse emerged from this dark period in 1940, when Benjamin Mays became the school’s sixth president (1940-67). During his twenty-seven-year tenure, Mays regained control of the college, and he enhanced its academic reputation. Holding a Ph.D. from the University of Chicago, Mays encouraged other faculty members to obtain their doctorates. He also encouraged students to question the established system of segregation that dominated the South during this time and to commit themselves to uplift their race. He expounded on his views during his Tuesday morning lectures, which Martin Luther King Jr., a Morehouse student from 1944 to 1948, often attended.

During the early 1960s, many Morehouse students became involved in the civil rights movement and often received encouragement and support from Mays. In March 1960 Morehouse students Julian Bond and Lonnie King helped organize the Committee on Appeal for Human Rights and participated in an eighteen-month campaign to desegregate the businesses and restaurants in downtown Atlanta. By the time of his retirement in 1967, Mays had helped rebuild Morehouse into a nationally recognized college with an excellent academic reputation and a strong financial foundation.

Morehouse Today
In 2017 the Morehouse College Board of Trustees named David A. Thomas as the school’s twelfth president. Thomas holds a Ph.D. from Yale University in New Haven, Connecticut, and served as the H. Naylor Fitzhugh Professor of Business Administration at Harvard Business School in Cambridge, Massachusetts, prior to his appointment at Morehouse.

Morehouse offers a dual-degree master’s program with the Georgia Institute of Technology in the natural sciences. In 1993 the school established the Center for International Studies, which was renamed the Andrew Young Center for International Affairs in March 1998 to honor Andrew Young, the prominent civil rights activist, and United Nations Ambassador. The school’s newest addition is the Center for Excellence in Science, Engineering, and Mathematics, built with the help of a $6.7 million grant from the U.S. Department of Defense. Morehouse has produced three Rhodes scholars (in 1993, 2001, and 2003), more than any other historically Black college.

In 2006 Morehouse acquired a collection of Martin Luther King Jr.’s papers, which include his acceptance speech for the Nobel Peace Prize and his “I Have a Dream” speech. The papers are housed in the Archives and Special Collections Department of the Robert W. Woodruff Library at the Atlanta University Center. In 2015 Morehouse announced that the papers would provide the basis for the Morehouse College King Collection Series on Civil and Human Rights, a collaborative book series published with the University of Georgia Press.