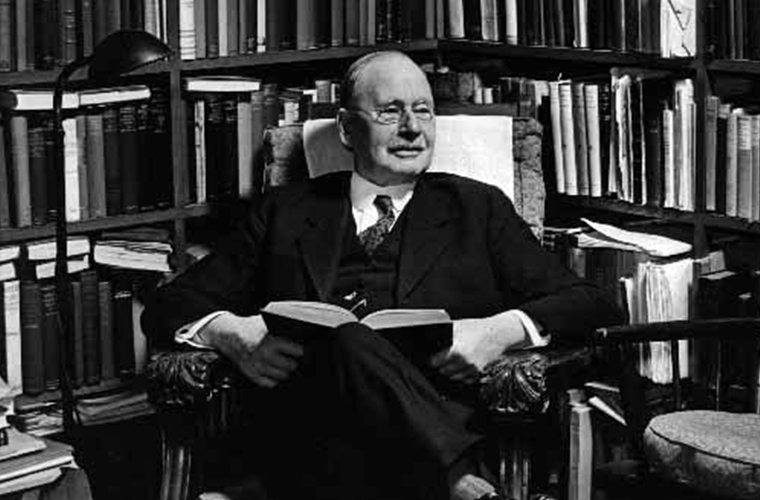 Rufus Jones was a highly influential American Quaker. He was one of the founders of the American Friends Service Committee and an instigator of the Quäkerspeisung feeding programme after the First World War. His influence enabled the two divisions of American Quakerism, which split in the mid 19th Century, to reunite after his death. Often described as a Quaker mystic, he was able to reconcile science and modern, liberal thinking with his Quakerism. He delivered the first Swarthmore Lecture in London in 1908 and is the only person ever to have given two, the second being in 1920.

Jones was born in Maine, USA, to an old Quaker family. His uncle and aunt, Eli and Sybil Jones established Friends Schools in Lebanon (then part of Syria) and Palestine. He attended the Providence Friends School in Rhode Island and Haverford College in Pennsylvania and, having obtained an MA from Harvard, returned to Haverford as a professor of Psychology and Philosophy.

Having learnt in the study of natural science that “the world was not made in six days and that man did not begin with Adam,” far from being troubled by the scientific evidence, he found, “his religious faith all the more secure when it marched with facts.”

The essays of Ralph Waldo Emerson introduced Jones to the idea of George Fox as “one of a great historical succession of mystics.” This revelation changed Jones’s conception of his family’s religion. From the writings of the early Quakers, Jones crystallised the concept of the ‘inner light,” an idea central in particular to modern liberal Quakerism. “The Inner Light is the doctrine that there is something Divine, ‘Something of God’ in the human soul,” he wrote. This inner light was something integral to the human condition, irrespective of a person’s religious conviction.

But Jones’ mysticism was always strongly coupled with a sense of responsibility towards the world at large. In 1904, he published Social Law in the Spiritual World. In it, he made clear that the Quaker concept of “listening to the Spirit, being guided by the Inner Light of Christ” must be coupled with a “call of duty … an appeal to help build a better world for unborn generations… Keep your feet on the ground and get something done … a true and noble life must move on both these legs and not a single one of them alone.”

In 1917, when the United States entered the First World War, he and Henry Cadbury established the American Friends Service Committee, to provide ways for young conscientious objectors to serve without joining the military. They set up courses for COs, training them to work with groups like the Friends Ambulance Unit in Europe. At the end of the war, Jones steered the AFSC towards relief work and was instrumental in organizing the Quäkerspeisung, the large scale feeding effort that saved millions in Germany from starvation.

In 1927, Jones travelled to Asia. He met Gandhi and visited the birthplace of the Buddha, and went on an extended lecture tour in China. Shortly after, Jones addressed the World Missionary Conference in Jerusalem, calling on them to be open to positive influences from other world religions, “gladly recognizing the good they contain.”

Following the attacks on Jews on Kristallnacht in 1938, he went to Germany with two other Quakers and met with Reinhard Heydrich, later one of the architects of Hitler’s ‘Final Solution,’ to plead with him for better treatment for the Jews. Jones believed that it was in part Heydrich’s awareness of their work with the Quäkerspeisung that led to their appeal being heard politely. “The promise made to us was kept,” he wrote after the war, “and the door was opened for the extensive relief which followed our visit, including the emigration of many Jews.”

In 1947, Jones represented the AFSC in Stockholm when the Quakers were awarded the Nobel Peace Prize.

Throughout his life, Jones sought to heal the divide between the two branches of American Quakerism that resulted from the split in the mid 19th Century. The founding of the AFSC was one of the first ventures in which both branches worked together. His patient efforts are credited with bringing about the reconciliation, which was finally achieved in the mid-1950s, a few years after his death.